This report has outlined the Jaguar Land Rover organisational structure at a variety of business levels. It has been found that JLR has adopted a functional structure in the majority of cases.

Recommendations have been made to change the lowest level of management organisational structure within the Standards & Controls department into a divisional structure.

Coupled with this, motivation factors have been discussed to aid the transition and gather employee approval before changes are adopted and how to use Maslow’s Hierarchy of Needs to find rewards at higher levels to continuously motivate employees.

The current environment in which organisations operate fluid and filled with challenges that are continuously arising, thrust upon an organisation from a variety of directions, such as meeting the latest government legislation and delivering products that will keep customers coming back in the future. An organisation must therefore delegate resources to a variety of areas in an effective and efficient manner, using the most relevant organisational structure for the particular type of organisation

In this report, the organisational structure of Jaguar Land Rover (JLR) is investigated, in particular the focus from CEO down into Manufacturing and then further into the department of Standards & Controls (S&C) Trim & Final. Reviewing the organisational chart on a large and smaller scale an understanding can be gain about which organisational structure is employed by JLR. After this, comparisons can be made between different structures used in other organisations, which will lead to recommendations on possible changes to the structure and techniques can be used to motivate a team to become accepting of any change in structure. 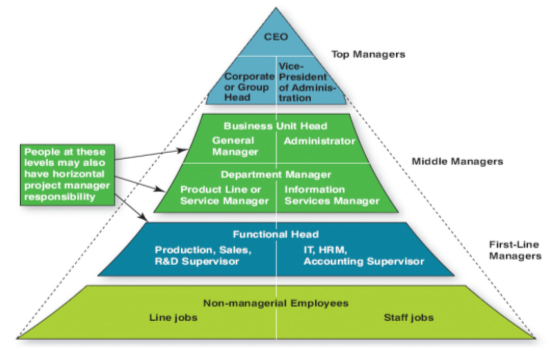 This section will review the characteristics of each of the structures used within JLR, with the implications and alternatives outlined in the Discussion & Recommendations section.

At the Top Managers section of the Levels of Management pyramid, the CEO (Dr Ralf Speth) is at Level 1, with his direct subordinates at Level 2. This consists of a team 15 members, including Executive Directors, the Chief Financial Officer (CFO) and the Chief Commercial Officer (CCO). They are organised in a vertical functional structure, with the roles based predominantly on function, with one Executive Director for the JLR China Division. This is shown in Figure 2.

The next level of the JLR structure is down from Level 2, the Executive Director of Manufacturing (Grant McPherson), down through Levels 3, 4 and 5 into the Middle Manager section of the Figure 3. Level 3 follows the vertical functional structure of Levels 1 and 2, however Level 4 and 5 structure changes into more of a divisional approach. Level 5 does not show the precise job roles for each employee, however, based on experience these jobs are function based.

Following the structure down into the First-Line Manager level of Figure 4, Level 5 is the Senior Manager, with the Departmental Manager (Level 6) for Standards & Controls (Simon Jenkins) directly beneath. He is responsible for a team of engineers, all with similar roles, however, their day to day tasks are determined by the First-Line Manager. 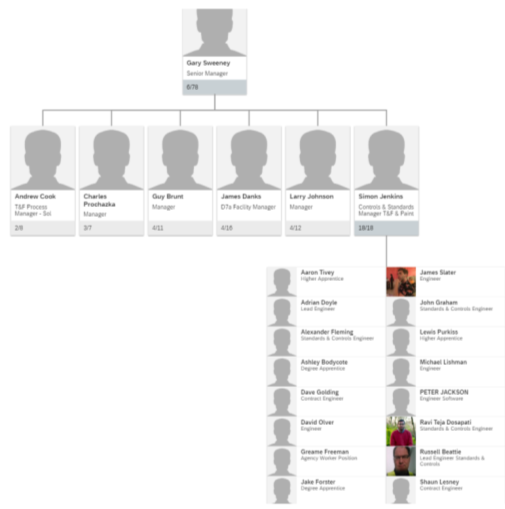 At the Top Managers level, the CEO manages 15 individuals. ‘Ideally in an organization, according to modern organizational experts is approximately 15 to 20 subordinates per supervisor or manager’ (ERC, 2014). Although this number is dependent on factors such as organisation size and nature of job performed. The CEO still have a large span of management/control, indicating that his subordinates can work autonomously without much guidance. However, given the current financial situation of JLR, decision making has become more centralised and taken up to the CEO level from Middle Management levels.

Middle Management levels follow a similar function based approach, with roles such as Manufacturing, Design, Sales, Marketing and IT, following the structure seen in Figure 5 below. 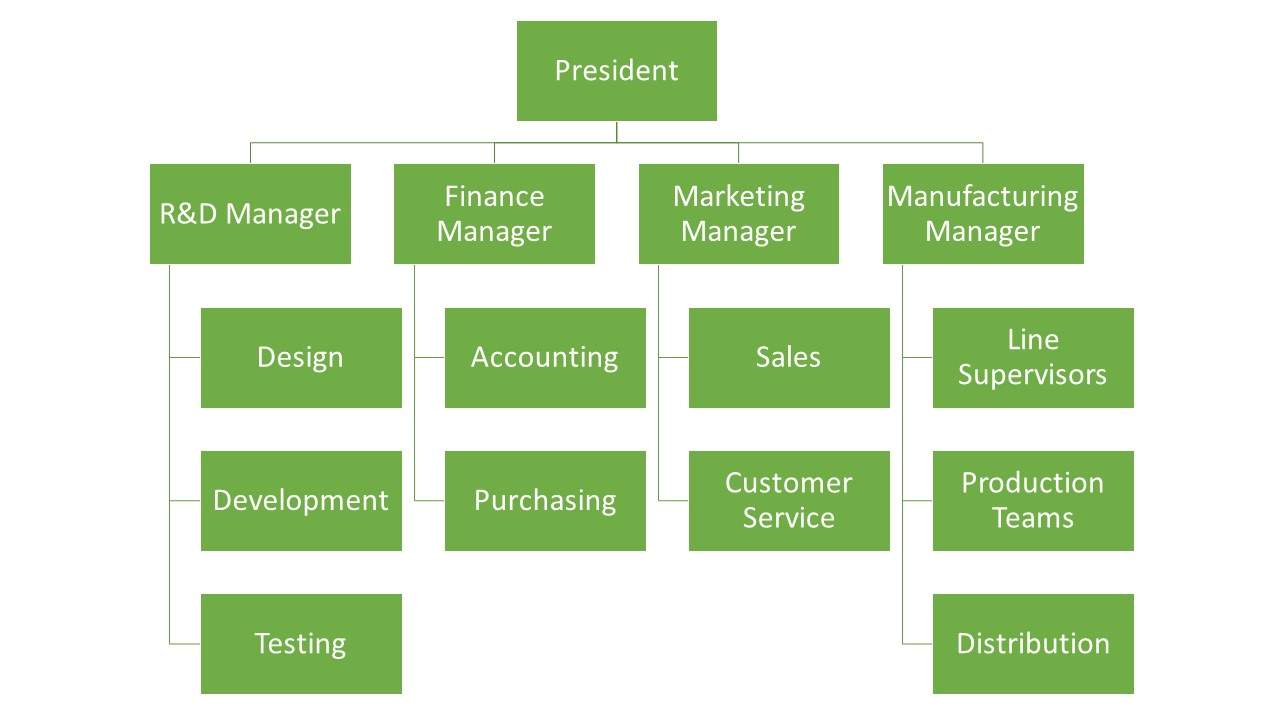 Splitting resources in this way can provide a specialisation environment where each department can become expert in their specific area and perform their tasks in an effective and efficient manner. However, ‘having departments populated by employees specializing in specific work areas means that teams become siloed. Employees in different teams do not get the opportunity to meet and share perspectives, which can be harmful for the progress of the business in the long run’ (Gleeson, 2019).

An alternative structure that could be adopted at the lower levels of management, particularly the S&C department, is to combine all divisions of S&C under one senior manager, as the S&C Body in White team are split off at Level 4. This would enable greater communication over the cross-functions to make sure that work is not being replicated and processes are being adopted by all areas of S&C.

Examples of some ways divisional structure could be adopted are shown in Figures 6 and 7 below. 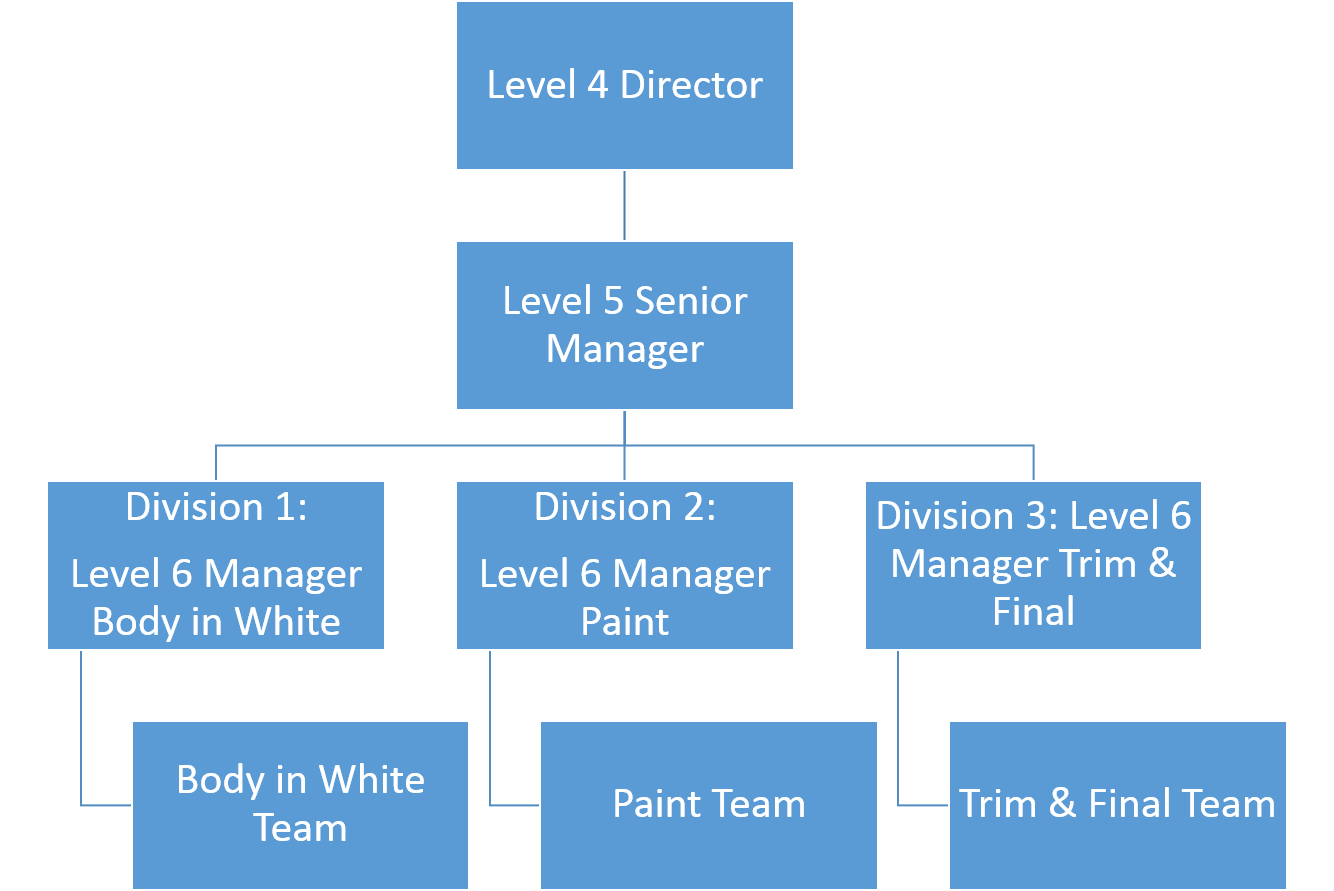 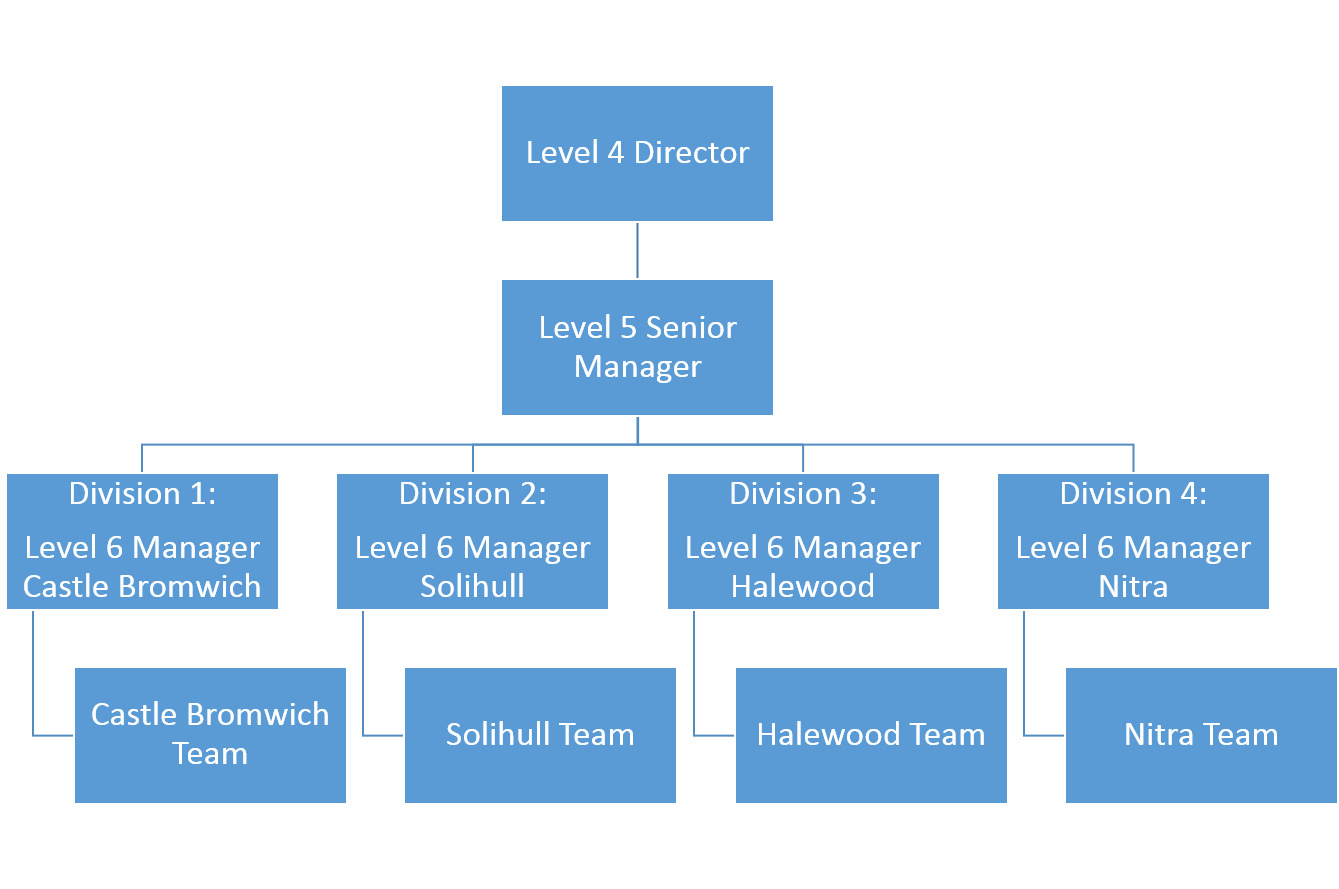 ‘Divisions work well because they allow a team to focus upon a single product or service, with a leadership structure that supports its major strategic objectives’ (Gilkin, 2019), so each team will be able to concentrate on their particular area/site rather that the current situation, where many employees have cross-functional tasks and are expected to travel between all manufacturing sites. However, dividing the teams in such a structure could reduce communication between areas and therefore more effort would be required to ensure communication lines remain open and available all the time.

Also, according to (Devaney, 2019), ‘The main downside of a geographical org structure: It can be easy for decision- making to become decentralized, as geographic divisions (which can be hundreds, if not thousands of miles away from corporate headquarters) often have a great deal of autonomy’.

As it appears with the current organisational structure, the CEO is not aiming to create divisions at such low levels of management, as this would require hiring more people, which is not possible during the current state of affairs, especially as a Level 6 manager in S&C can cover a variety of sites, with several supervisors under them who can perform the same tasks with a slightly lower authority.

A number of leadership techniques can be adopted in order to motivate a team to adopt a new organisational structure.

Customer First Principles is a system that has been adopted by JLR to improve customer experiences, not just sales to customers buying cars, but also internally from managers to employees.

The Level 5 manager could utilise some customer first principles as a way to motivate the S&C teams to adopt. The Transparency principle will allow the teams to feel they are being given a full view of any change of organisational structure changes that would take place.

After implementing any change within the workplace, the initial motivation from employees declines over time and new changes become the norm. This can be seen on the 2 Factor Motivation Theory Diagram by Herzberg, in Figure 9. 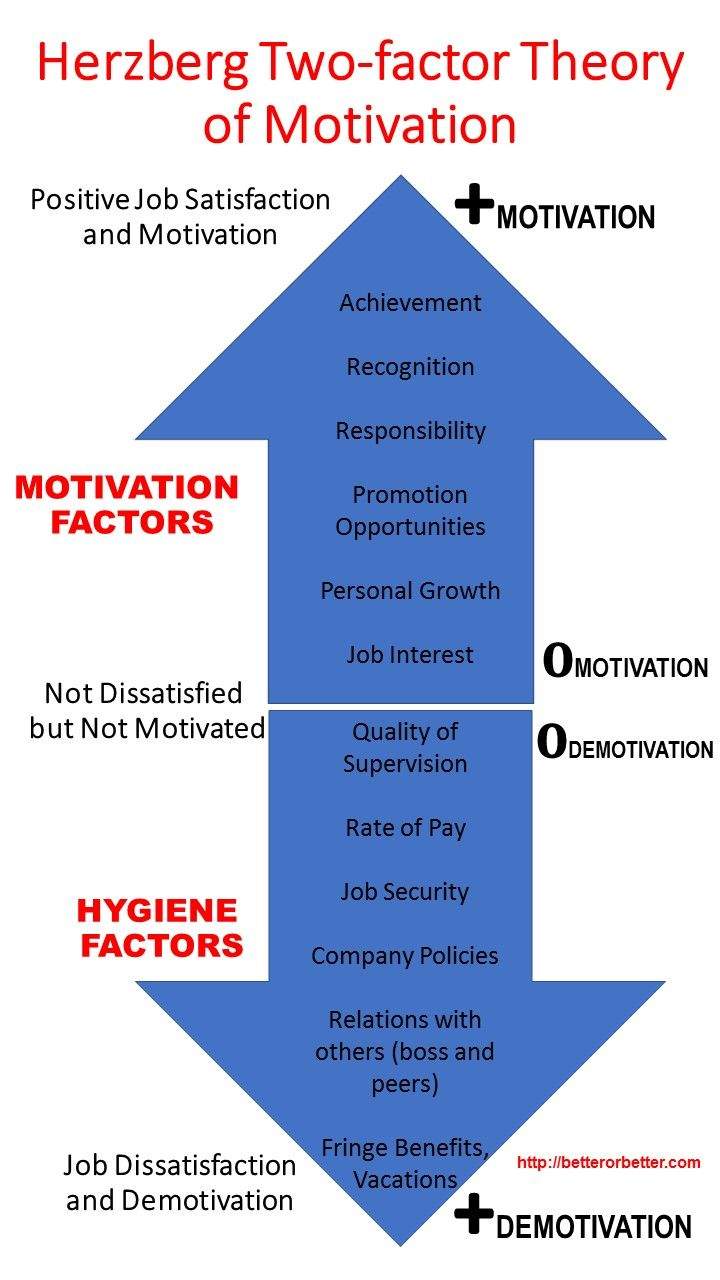 The structure change will catapult employee motivation to the top of motivation factors, however, over time, they will slowly move down towards the middle.

Motivators need to be continuously added, as motivation is strongly linked to performance and productivity, as seen in the Hawthorne Studies, where an increase in lighting led to an increase in productivity, however, it wasn’t the lighting that created this increase, it was the fact that the workers were listened to. The employees were therefore feeling empowered as they have the power to contribute to higher level decisions that improve the workplace.

A reward system can be introduced to give employees targets and goals to aim for and then they will reap the rewards for completing these tasks. Rewards can be tangible, such as cash bonuses, or intangible, such as recognition or promotion. Maslow’s Hierarchy of Needs, Figure 10 below, outlines the needs of every individual. It can be translated on and off the job, where the lowest needs are accessed first before the higher level needs can be attained.

In this report, it has been concluded that JLR has adopted a functional vertical structure on the whole, mixed with divisional in the Middle Management levels. This brings advantages such as an ability for continuous increases in specialisation of departments, however the divisive nature indicates that there is a risk of a lack of communication between areas, something which is experienced in JLR.A team based structure is adopted at the first line manager level, in order to complete short term tasks and goals.

It has been shown that within the lowest levels, particularly the S&C team, a divisional structure could be adopted, with advantages and disadvantages outlined for this structure.

To make a change to organisational structure, it is required for managers to employ the correct leadership and motivational methods, in JLR’s case, using Customer First Principles to be transparent, not using an authoritarian style and encouraging employee co-operation through transformational leadership.