Epilepsy is a neurological disorder that targets 1 in 100 people in North America. Epilepsy is one of very few diseases without a definite cure. In fact scientists to this day cannot figure out what triggers these seizures. This is quite amazing considering the modern technologies medicine uses today. Throughout my paper I will explain what epilepsy is and what happens during an epileptic seizure, I will cover the different categories of seizures, how doctors diagnose epilepsy, and different types of treatment to help the patients with epilepsy.

Epilepsy is a neurological disorder that attacks the nervous system. Another term for epilepsy is “seizure disorder” (www.epilepsy.com). To this day the exact factor that triggers an epileptic seizure is unknown. In other words epileptic seizures are idiopathic (Ogden, 2005). Seizures occur when too many brain cells get excited at the same time. A seizure is like an electrical storm in your brain. During this electrical storm your brain cannot perform its usual tasks, causing sudden changes in behaviour, sensations, movement, and awareness (www.epilepsysociety.org.uk). A typical seizure usually last between a few seconds, to a few minutes. Once the seizure is finished the victim enters a “post-ictal period. (The greek word “post” meaning “after”, and the Greek work “ictal” meaning “seizure” [http://www.behindthename.com]). During this post-ictal period, which can last from seconds to hours, the brain begins recovering, and the victim’s awareness will gradually increase. It is common to experience confusion and drowsiness during this phase.

Epilepsy is the conditions of having spontaneous seizures. This means having one seizure is not enough to be diagnosed with epilepsy, there must be two or more. To be considered an epileptic seizure the seizure must occur spontaneously, without a direct factor (www.epilepsy.com). Doctors use three main ways to diagnose epilepsy.

Unlike primary generalized seizures, partial seizures usually have a warning sign to inform the patient a seizure is near. This warning sign is called an “aura” (Columbia University, P. (2013)). An aura usually takes place a few seconds, or a few minutes before the seizure occurs. Aura’s can come in many different ways, such as; numbness, headaches, being light-headed, upset stomach, dizziness, the sensation of fear, forced thinking, abnormal sensations, or unusual tingle in a certain area of your body. When an epileptic patient senses one or more of these symptoms there is high probability a partial seizure will be soon to follow (William H. Blahd, Jr, August 25, 2011).

The most common type of epileptic treatment is anti-epileptic drugs or AEG’s. With over twenty different choices seventy percent of epileptic patients choose anti-epileptic drugs. Although these medications to not cure epilepsy, it only suppresses the seizures (see figure #3, located on the top of the next page) (www.webmd.com). The way this medication works is by lowering the amount of electricity each neuron passes in the brain. This type of treatment is very useful in cases of generalized seizures. The only down fall from using anti-epileptic drugs is the side effects and because the medication acts on the brain and the body there is numerous side effects. The main four side effects are headaches, balancing troubles, more difficult to focus your eyes, and trouble thinking properly. This medication is not guaranteed to work; in some cases patients experience both seizures and side effects. When this occurs a new treatment is needed. This can be a switch to a different anti-epileptic drug or a non-medicated treatment (Juan G Ochoa, Selim R Benbadis). If a patient does not have a seizure for two years and shows no sign of epilepsy on an EEG the doctor will slowly begin to ease off the medication. (FAULKNER M. A. (2014)) 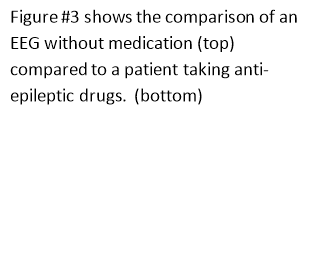 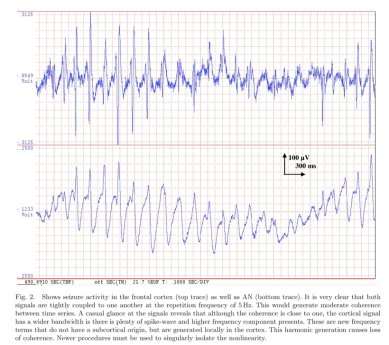 The other option of treatment for patients with epilepsy is the non-pharmaceutical route. Although anti-epileptic drugs have the highest success rate, non-medicated treatment has substantial research to support it (www.epilepsyontario.org). Brain surgery is the most common non-medicated treatment; the only issue with brain surgery is that it only works for partial seizures. The reason why is only works on partial seizures is because doctors can locate the specific area of the brain and remove sections of it. On grand mal seizures both hemispheres are triggered at the same time, in order to fix the epileptic problems doctors would have to remove too much of the brain, the patient would not live (www.epilepsyontario.org). New research always shows diet can be very beneficial; his is called the ketogenic diet. Its takes a lot of commitments considering no sweets or treats are allowed and 80 percent of the diet must be fatty foods, but low in carbohydrates. The ketogenic diet has success rates from 30 percent up to 50 percent (www.epilepsyontario.com).

Epilepsy has become more and more common in the past 20 years. Now that it has become more common scientists all over the world are beginning to test for a cure, weather that is a new class of medicine, gene therapy, or a non-medicated cure. The newest research for curing epilepsy is gene therapy. In 2009 scientist were able to figure out that the gene for epilepsy is located on chromosome 15 also known as “15q13.3”. (www.sciencedaily.com). With this knowledge and the proper technologies scientists can inject a virus containing the normal gene into chromosome where the epileptic mutation is. From there the normal gene will splice into the DNA strand, fixing the abnormal gene. In result epilepsy will be cured from the patient, and when they reproduce they can pass on a normal gene to their children. With this being said we can potentially remove epilepsy from our society. So far scientists have been able to cure rats with epilepsy using gene therapy, and now they have also been successful in Border Collie dogs. (Keijiro MizukamiAkira Yabukihye-Sook ChangUddin, M.) Another example of further research is new drug classes for epilepsy that are advancing each year. A good example of this is: September 2013 a new epileptic drug called Perampanel was released in United States. This new drug showed up to 35 percent more responsive outcomes than any other drug on the market. (www.ncbi.nlm.nih.gov). The only factor that is holding science back from curing epilepsy is funding. There is not enough funding going into epilepsy research. With the proper amount of Government funding or public donations epilepsy would be cured within the matter of five years from now.

Epilepsy does not affect the patient only physically, but also mentally and emotionally. Patients who suffer from epilepsy also have to deal with low self-esteem. Low self-esteem and epilepsy go hand and hand because patients with epilepsy are afraid of going out in public, or even doing the normal day to day things because the thought of having a seizure in public. (Ogden, 2005) It is extremely embarrassing for a patient suffering from epilepsy to have a seizure in front of their friends, family, or even strangers. Another emotional barrier that is part of suffering from epilepsy is the thought of never getting a driver’s license. Not getting a driver’s license makes everything in a normal adult life difficult. From getting to work, or getting groceries, or any sort of transportation. In some cases epilepsy makes the patient one hundred percent dependent on other people.

Life with epilepsy makes any day to day task more difficult. Epilepsy has impacted millions of people in a negative manner but further research is getting close to a cure, by using gene therapy research, and finding new classes of medicine. With the proper funding from the government epileptic medicine will continue to grow and be redefined. The research going into epilepsy is constantly growing, at this rate epilepsy will have a definite cure within the next decade, and using gene therapy epilepsy will also be removed from our society all together, allowing everyone to live epileptic free.