How effective is Luteium-177 and Gallium-68 as theranostics to treat neuroendocrine tumours? Introduction to Lutetium-177 and Gallium-68

Lutetium-177 (Lu-177) and Gallium 68 (Ga-68) have both seen major uses in the medical industry in the last decade and can be commonly seen in usage together. When two radioactive drugs are used together to diagnose and treat diseases, they are called theranostics and are typically used in this manner as a result from Ga-68 being used to scan and in certain cases diagnose patients with Neuroendocrine Tumours (NETs). Lu-177 has commonly been used as a counterpart to Ga-68 to therapeutically treat NETs and both Lu-177 and Ga-68 have been extremely effective at treating and curing NETs when compared to other theranostics. This is owing to the fact that Ga-68 has proven itself to be extremely accurate and reliable at relating data of the location of the NETs and Lu-177 having high rates survival rates when compared to other therapy medicine such as Cabazitaxel.

Isotopes are atoms in an element that have different atomic mass but the same atomic number, Due to this they have the same number of protons which gives them identical chemical properties but different number of neutrons that gives them unique physical properties. Radioactive isotopes (radioisotopes) are isotopes that have an unstable nucleus, due to the nuclei having too many protons or an unstable ratio of protons and neutrons. They will release excess energy by continuously emitting radiation such as alpha (α), beta (β) and gamma (γ) rays and will continue to do this until they reach a more stable configuration. This process is known as nuclear decay and radioisotopes will continue this process even when decaying into another radioisotope. This process will only stop if the nucleus becomes stabilised. Figure 1: This graph displays the types of decays through the number of subatomic particles and quarks.

Lu-177 and Ga-68 are both radioisotopes and due to this they both decay with Lu-177 having a half-life of 6.5 days and Ga-68 a half-life of 67 minutes. Lu-177 emits beta waves and this occurs in the radioisotope since the ratio of neutrons and protons is far too high, and neutrons will transform into a proton to decrease the number of neutrons and increase the number of protons. This process will lead into a by-product of an electron that is released from the nucleus through energy. This electron is what is known as the beta ray and in the case of Lu-177 the emitted radiation rays can penetrate 2.1mm of soft tissue. Lu-177 will also have their nuclei transition to a lower energy state and consequently a gamma ray will be released, although only a very minimal amount. 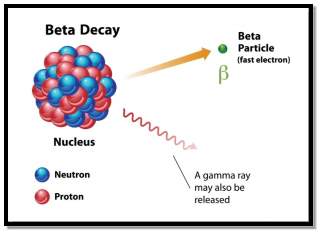 Figure 2: The image displays Lu-177 decaying as it’s releasing both an electron and a gamma ray.

Ga-68 also goes through beta decay but instead of releasing an electron they emit a positively charged electron (positron) and this occurs because the ratio or protons to neutrons is too high and as a cause a proton transforms into a neutron and releases a positron. A positron is created and released through energy but if the energy is insufficient the nucleus will draw in an electron and the electron will help transform the proton to a neutron (This process is called electron capture). A neutrino which is an almost massless quark will be released, however it rarely reacts with normal matter and therefore is irrelevant to the medical industry. Figure 3: This shows both the positron emission and the neutrino by-product.

The process of creation for Lutetium-177 and Gallium-177

Lutetium-177 is produced through 2 primary methods, the direct way, and the indirect way and both include the process of Neutron bombardment which enacts the process of nuclear fission. During the process of nuclear fission, a neutron is fired at atoms at incredibly fast speeds and the atom on collision will typically release smaller atoms and neutrons that will then go and hit other atoms causing a chain reaction. Lutetium-177 productivity is most effective and price efficient through the indirect process which involves the natural occurring isotope named Ytterbium-176 (YB-176) as it is bombarded with Neutrons to create Ytterbium-177 (YB-177). YB-177 has a half-life of 1.9 hours and it will subsequently decay into Lutetium-177. Through this method a Non-carrier added (NCA) Lu-177 is created and this mean that it does not contain any non-radioactive isotopes. Figure 4: This shows the process of Yb-177 decaying into Lu-177 through negative beta decay.

Figure 5: This is an equation which demonstrates the creation process of Lu-176 and a neutron to create Lu-177m and Lu-177.

Ga-68 is produced through a cyclotron via the reaction of Zinc-68 (Zn-68) and this is done through the cyclotron speeding up positively charged particles and to hit specific targets such as Zn-68 which irradiates it, thus transforming it into Ga-68. However due to pure Zn-68 being unattainable small amounts of Gallium-66 (Ga-66) and Gallium-67 (Ga-67) will be present. However, Zn-68 will be purified to a point where troubles will not occur through it reaching 100% purity but now too low where Ga-66 and Ga-67 can cause problems when induced into humans for diagnosis.

Figure 6: The equation of irradiation of Zn-68 to turn it into Ga-68 is shown here as it displays the rection of ZN-68 and an electron.

The affect and usage of Lutetium-177

Lu-177 is commonly used in combination with other molecules to produce Lu-PSMA (PSMA meaning Prostate-specific membrane antigen) and this is done to specifically target the NETs. PSMA is a membrane protein which is found in all forms of prostrate tissues and is typically safe from the NETs even though it is a receptor common on prostate cancer and due to this the molecule Lu-PSMA617 specifically attaches itself to the PSMA cells. This allows the radiation from Lu-177 to target the cancer cells and remove the risk of it attacking normal cells excessively. The molecules that are combined with Lu-177 are attracted to PSMA and when Lu-PSMA is injected into the body of the patient the NETs will be targeted and the Lu-177 will radiate and slowly damage the cancer cells whilst minimising damage elsewhere. However, just like all other therapeutical treatments of cancer this is not meant to treat it but rather minimise it and improve quality of life, as the cancer cells will eventually reappear. For a Lu-177 therapy treatment the price is averaged around $10,000 USD and this is considerably cheaper than the most popular treatment of NETs, Cabazitaxel which averages at $50, 000 USD. Cabazitaxel has a half-life of 95 hours which is around 70 hours shorter than Lu-177 and this allows Lu-177 to have a longer affect on the body when attacking NET cells. Even so, this can also have a negative impact on the body as the duration increase also means that normal cells will continually be damaged for a longer period when compared to, if it was exposed to Cabazitaxel. Therefore Lu-177 is used in much more serious case of NETs when compared to Cabazitaxel and is widely considered to be a last option use when all other methods have been exhausted.

Figure 7: This displays the pros and cons of Lu-PSMA and shows that although Lu-PSMA is not the best option in some cases it can however be extremely effective and important in certain cases.

Lu-PSMA has a 29% higher response to PSA when compared to Cabazitaxel and when 200 men were selected to be treated with Lu-PSMA there was no fatalities attributed to Lu-PSMA. 30% to 70% of men who have been treated with Lu-PSMA have had a 50% reduction in PSA levels. Lu-PSMA has been shown to be non-fatal however, it has also shown to increase survival rate as 57 patients were treated with Lu-PSMA at 6-week intervals and in the first 2 years there was a 12.4% survival rate however, this increased to 78.6% after another 2 years. Typically, the fatality rate would only decrease as these patients would have had their bodies continually damaged by NETs but instead it increased which is an extremely positive sign and clearly demonstrates the effects of Lu-PSMA. Figure 8: This exhibits the before and aftereffects of Lu-PSMA with the red indicating the NETs.

The affect and usage of Ga-68

Ga-68 uses Positron emission topography (PET) and this is done through the positron slowing down after travelling 1mm and eventually hitting an electron inside the body of the patient and because of this collision, energy is released through gamma. 2 gamma rays are emitted and travel at the opposite direction of each other and hit sensors that communicate data of the patient’s body. Because Ga-68 will be targeted directly towards the NETs, this will communicate data mostly referring to the location of the NET. 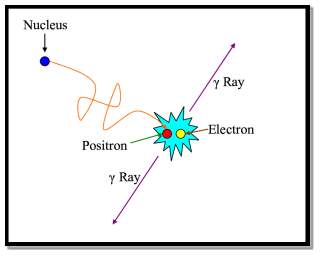 Figure 9: The nucleus releases a positron which collides with a foreign electron which creates 2 gamma rays which run at opposite directions to each other.

Side effects of Ga-68 have been cited to be such as excessive coughing, difficulty with swallowing, dizziness, itchiness and among others. However, Ga-68 has a much higher accurate reading of NETs than PETs and in recent years it has seen a surge in availability as the restrictions of it has lightened with evidence providing suggesting that Ga-68 has no fatal side effects.

Effectivity of Lu-177 and Ga-68 as theranostics

To conclude this report, we can confidently state that Lu-177 and Ga-68 have both been proven to be effective uses of nuclear medicine and could possibly be the main theranostic approach for treating NETs. This is due to Lu-177 outperforming other forms of therapy related to the treatment of NETs and Ga-68 has proven to be the most effective and accurate way to portray information relating to the whereabouts of NETs. When in conjunction together Lu-177 and Ga-68 do not harm each other or cause any problems but rather work extremely well as they Lu-177 helps eradicate the NETs Ga-68 reveals.