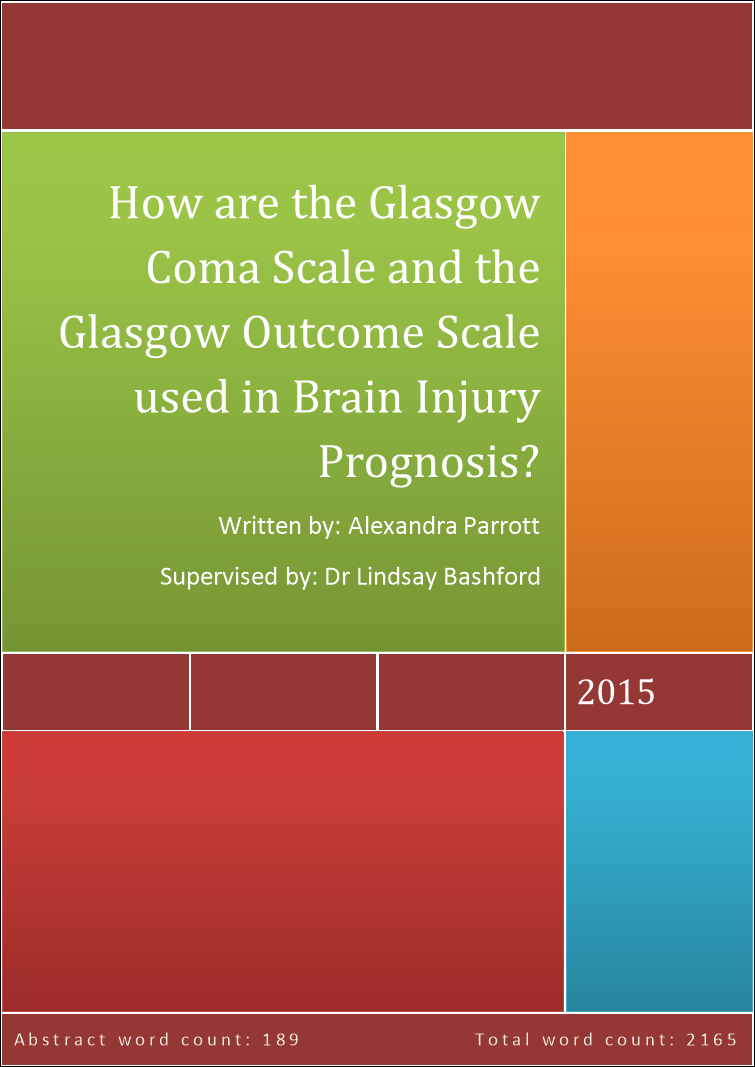 Traumatic brain injury (TBI) is a leading cause of death in adults under the age of 45 and an estimated 7.7 million people in the European Union are living with a disability caused by TBI. The severities of these injuries are differentiated by the use of the Glasgow Coma Scale (GCS), and the outcome is assessed by the Glasgow Outcome Scale (GOS). These scales can be used to develop a prognosis for individuals with TBI’s in various ways. Primarily, the lower the GCS score the more severe the brain injury and therefore the worse the outcome for the patient. The GOS is applied 6 months after injury and provides a score of 1-5 with a lower score indicating the worse outcome, death. To conclude GCS by itself cannot be used to provide a long term prognosis for brain injuries. GCS can be used in addition to other factors such as presence of a midline shift on Computer Tomography and fixed pupil dilations are significant in determining prognosis. The presence of lesions on the brainstem correlates with the GCS and GOS scores allowing reliable and valid prognosis’ to be made.

Traumatic brain injury (TBI) affects an estimated 1.4 million people every year in the United Kingdom (UK)[1], and is a leading cause of death in adults under the age of 45. [2] It is currently estimated that at least 7.7 million people in the European Union are living with disabilities caused by TBI’s. [3] TBI’s account for 6.6% of the Accident & Emergency (A&E) attendees. [4] 95% of all TBI’s presented at A&E are mild, 5% severe and moderate injuries. [5] It is extremely important to determine the severity of the TBI as it has implications on the treatment and later rehabilitation of the patient. TBI can be open or closed injuries, with open TBI injuries being linked to worse functional outcomes and increased mortality.

WHAT IS THE GLASGOW COMA SCALE?

The GCS is a test to ascertain the consciousness of a patient after being subject to a TBI. The maximum score with this scale is 15 and the minimum 3, this is comprised of three sections: eye opening, verbal response and motor response. (Table 1). GCS is included in National Institute for Health and Clinical Excellence (NICE) guideline on head injury3 to provide information on survival rates for patients suffering different severities of TBI. The guideline also indicates that GCS is a measurement that should be taken at the scene of the injury by paramedics. If this is not possible it should be taken at admission to A&E as early indication of TBI severity is imperative in the later treatment.

The GCS differentiates between the severities of head injury by score ranges. A GCS of 13-15 indicates a mild head injury, 9-12 moderate and 3-8 severe. The GCS score can be affected by the time it is applied after injury, therefore in order to universalise this, GCS is often used once the patient has been stabilised.4

The GCS can be difficult to use in trauma cases, as localised trauma, swelling, sedation and intubation can affect testing the eye and verbal responses. [6] [7] In a survey performed by The European Brain Injury Consortium only 49% of patients could be tested fully against the scale after being stabilised in resuscitation.[8]

Table 1- Glasgow Coma Scale Components of the GCS and how each section is scored individually Adapted from: Bethel J. 2012, Emergency care of children and adults with head injury, Nursing Standard, 26(43), 49-56

The GCS is considered by some to have acceptable inter-rater reliability[9] when used by experienced practitioners. However mistakes are made consistently by inexperienced users of up to 1 mark per section. Inter-rater reliability was shown to improve after exposure to a training video.[10] Reliability with scoring is imperative in making accurate TBI severity diagnosis, and then the relevant treatment associated with them.

In severe TBI’s the motor component of the GCS is the best indicator of prognosis, this is due to verbal and eye scores not being able to be performed. [11] This has led to an adaption of the motor score of the GCS, called the simplified motor score (SMS). The SMS has 3 scores: 2 obey commands, 1 localises pain and 0 withdrawal to pain.[12] It was found that the SMS and GCS were useful in indicating whether neurosurgery was needed and also intubation. Overall GCS was better in predicting chance of death, however SMS was able to be used to assess patient involved in trauma more effectively as intubation and eye swelling would not be detrimental.12 This indicates that SMS may be better used in conjunction with GCS with patients who present to A&E with severe head trauma.

HOW CAN THE GLASGOW COMA SCALE BE USED IN BRAIN INJURY PROGNOSIS?

A more severe TBI will lead to a worse 6-month functional outcome for the patient. 30% of patients with initial GCS <13 will die[13] and 50% of patients with GCS ≤8 after being stabilized in resuscitation will die.6 Patients who have a GCS score of 3-5 have a 5% chance of survival 6 months after injury.[14]

There is no direct correlation between GCS score and the patient’s ability to function in daily life afterwards. This is due to varied functional outcomes being linked to different scores on the GCS.[15]

Patients with GCS ≥8 had 85% chance of favourable prognosis, if this score was obtained 24 hours post-admission.[16] The predictive value of GCS scores alter according to the time at which the score was obtained. GCS scores obtained at least 24 hours after trauma were linked to the grade the TBI was classified by MRI data. These grades are associated with brain stem lesions, grade 4 being the worst and grade 1 the best.

The higher the GCS score the lower the grade of brainstem lesion and therefore the better prognosis in terms of functional outcome for the patient. 14 In a study performed by Utomo et al there were no patients with GCS 3-8 that were living independently 6 months after injury. In addition patients with this GCS score were 24 times more likely to die when compared to patients with GCS score 13-15.[17]

GCS alone cannot accurately predict the brain injury prognosis for a patient. However, if GCS is applied with computer tomography (CT) evidence and pupil dilations, then a prognosis of possible functional outcome can be made for an individual patient.[18]

WHAT IS THE GLASGOW OUTCOME SCALE?

The GOS was developed to assess functional recovery of patients with brain injuries.[19] The GOS is based on a structured interview that assesses 7 areas: consciousness, independence at home, independence in the community, work, leisure and social events, relationship with family and friends and finally return to normal life.[20] The area in which the patient is living is not taken into account with the GOS but is taken note of separately.

The standard GOS has a 5 point scale (Table 2) but was extended after concerns were raised that it was not sensitive enough in detecting minor disabilities that may restrict the patient in returning to work. This led to the GOS extended (GOSE) being devised.

Guidance has been published to increase the universal reliability of the GOSE[21], but there are still issues with its application. This is mainly due to the time period between the TBI and the GOSE being applied, this is normally taken at 6-12 months post injury. A GOS assessment at 12 months was more reliable than at 6 months[22], but it may increase the number of patients lost in follow up. 10% of patients who were moderately or severely disabled at the 6 month GOS test improved by one category.

The GOS and the GOSE scores can be obtained via phone call increasing their practicality as a scale. This scale is reliable when performed over the phone due to the standardized interview which informs the score that the patient will receive.19

HOW CAN THE GLASGOW OUTCOME SCALE BE USED IN BRAIN INJURY PROGNOSIS?

This score is unlikely to change from an unfavourable to favourable outcome after this time period although some small improvements may be seen.18 Any further improvement is probably linked to rehabilitative treatment, and not the improvement of the patient’s TBI.

The age of the patient and the severity of their TBI need to be taken into account when deciding on treatment. The prognoses for individuals in the 75+ age range are unfavourable according to the GOS. 15 Due to this treatment should be decided based on this factor.

There is a correlation between the GOC score a patient is given and the grade of their brainstem lesion that is provided by MRI data. A higher grade of brainstem lesion correlates to a more unfavourable outcome for the patient.14

Overall the GCS cannot by itself provide either long or short term brain injury prognosis. This is because there are too many variables that affect each GCS score, including the fluctuation of the GOS associated with these scores and the difference in reliability depending on who has applied the scale. The GCS is used to assess the severity of a brain injury and to allow medical professionals to constantly monitor the patient’s progress.

GOS can be used to give prognosis 6 to 12 months after injury; if the scale is used before this time then the score will not indicate the full functional outcome of the patient. This time period of scoring is not beneficial for prognosis at such a time that it will be used to inform treatment of the patient. The GOS does not provide a long term prognosis for brain injury as over time and with rehabilitation improvements can be made past what is predicted. Due to the time period necessary for GOS to be more accurately applied, the GCS can be used for the interim on a general scale in order to infer the likely GOC score a patient may receive. This score will be linked to other factors such as age, pupil dilation and presence of a midline shift on computer tomography, in addition to initial GCS score.18

To conclude the GCS and GOS are vital in identifying the severity of brain injury and are still the most used scales for their purpose due to their simplicity and acceptable reliability. The use of these scales in brain injury prognosis helps direct treatment for individual patients, and allows realistic individual rehabilitation goals to be made for that individual.