This Essay is about the outbreak of cholera in central London, in 1859 this outbreak discover and investigate by Dr Snow become an important feature and challenge in public health, epidemiology and made the start point of revaluation by using new tools such as, Maps in these fields and still using until now by public health scholars, this map tools develop and became use in different sciences especially in public health use efficiently disease control in the early stages(GIS and Remote sensing) , Dr John Snow found and proposed the cholera was commonly transmitted by drinking water, he used the map tools, statistical date, samples analysis, this this outbreak affect the lifestyle of the people by affect the relationship between people and also effect the businesses , in addition , effects the physical, chemical, and biological nature of our natural environments

Cholera one of the most infectious and fatal disease, is produced by the bacterium, Vibrio cholera (Harning, 2015), the classic symptoms of cholera are sudden onset exuberant, watery diarrhoea, Its effects are dramatic, and up to twenty litres of water will be lost per day that causes severe dehydration, circulatory collapse, and in the end cases, death, thousands of residents in the Soho area of London fell ill and at least 600 people died. (Barton, n.d.)

In summer season of 1854 in central of London, British capital there was outbreak of cholera within the place of Golden Square, and subsequent excretion of the cope with from the Broad Street Pump, have become big issue and feature of the folklore of public health and epidemiology (Howard Brody, 2000).

Doctor John Snow was physician and the anaesthesiologist of Queen Victoria of England in 1850s, and was very famous in that period in related to epidemiology science, his methods was simple, useful and valuable until now. (Peter Vinten-Johansen, 2003). He found “the disease could be transmitted by emanations from the sick person into the surrounding air, which enter the system of others by being inhaled, and absorbed by the blood passing through the lungs” (Peter Vinten-Johansen, 2003), in addition he proposed that cholera was commonly transmitted by drinking water. (Howard Brody, 2000)

He use map of the city and marked the locations and the area of the people died, then from this map he found most of the deaths in the area of Golden Square and he found the main source of sicknesses could be from drinking polluted water because the people in Golden Square was getting the water from a section of the Thames River that was known to be especially polluted. (Howard Brody, 2000) He used information from local Hospital and public records and asked residents if they had drunk water from the pump. Using this information he went on to create a dot map to illustrate the cluster of cases around the pump. (Howard Brody, 2000)

In this essay, I will assess the methodology used by Dr John Snow and how this methodology is still relevant until today in medical science, such as,  track the sources and causes of many diseases, and how to learn from this case to improve the public health practices of the people and avoid the environmental threats to the public health.

The methods of Dr Snow’s used in the 1849 cholera outbreak in London was a superlative example and used in modern of Epidemiology (Peter Vinten-Johansen, 2003) (Frerichs, 2009 ). Dr John Snow was able to build a successful theory based upon statistics and geographical tools, not usual used on that time and which enabled public health organization to combat the disease (Harning, 2015).

He used the map by pointed the incidence of the disease, he found that over 500 cases occurred within 10 days over an area of some 250 yards on London’s Broad Street. He investigated for some poison can come from the excreta of cholera patients, the main factors were the water from the Broad street pump and the local people used this source of water.

Dr Snow until he died in 1858 not found what caused cholera. In 1876 the German doctor, Robert Koch discovered cholera causes by bacteria called Vibrio cholera (University, 2004)

In 1854, the British Parliament applied Snow’s theory of water contamination to successfully diminish the impact of the disease and how to control the spread. this theory and the methodology used by Dr Snow can say is a start point for many applications in all sciences and produce the revolutionary in health and public policy in the UK and whole the world. (Harning, 2015).

Snow hypothesis is water contamination is main resource, according to that he start test water source Figure 1, there two water companies had drawn upon water from the River Thames that had been contaminated by sewage. He check houses and interviewed people about their source of drinking water to find the cholera mortality to the source of water and he found more mortality between those drinking the water supplied by the water companies, and he use these data in his research process, he turned his attention to the five pumps near Golden Square, which most of them contained contaminants that were visible to the human eye. (Howard Brody, 2000) 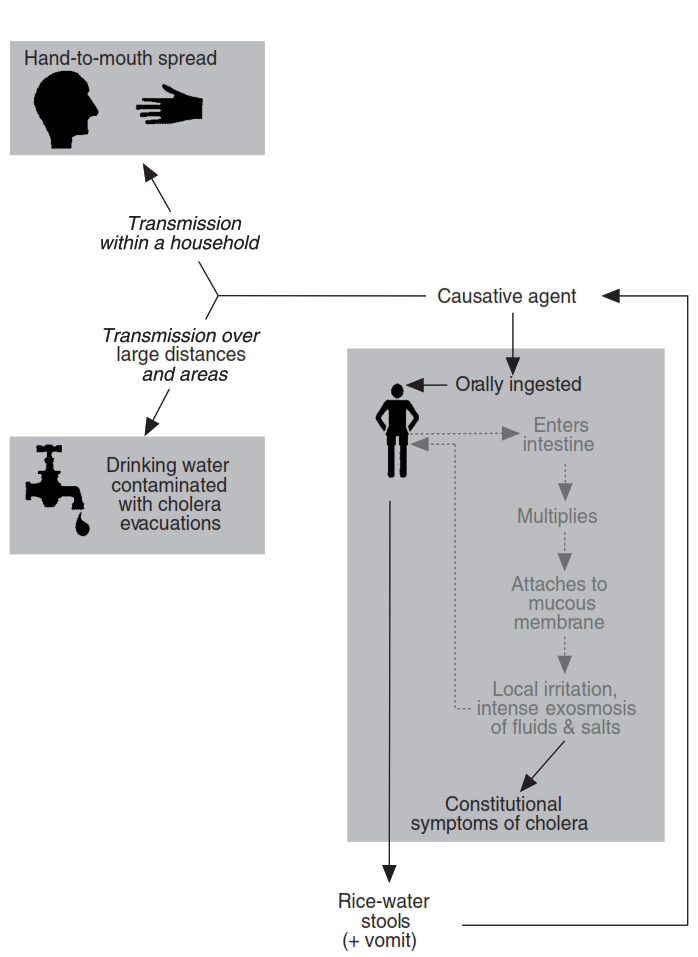 Snow’s methodology based on collecting geographic and epidemiologic data with clinical, pathological, and chemical data (Frerichs, 2009 ), by collecting this information helps him to demonstrate the severity of the outbreak and find the main resource cause the disease and how to spread very fast. Figure 2, the white section of the map shows the area of particular interest to John Snow. The blue area is encompassing the Broad Street Pump is circled. 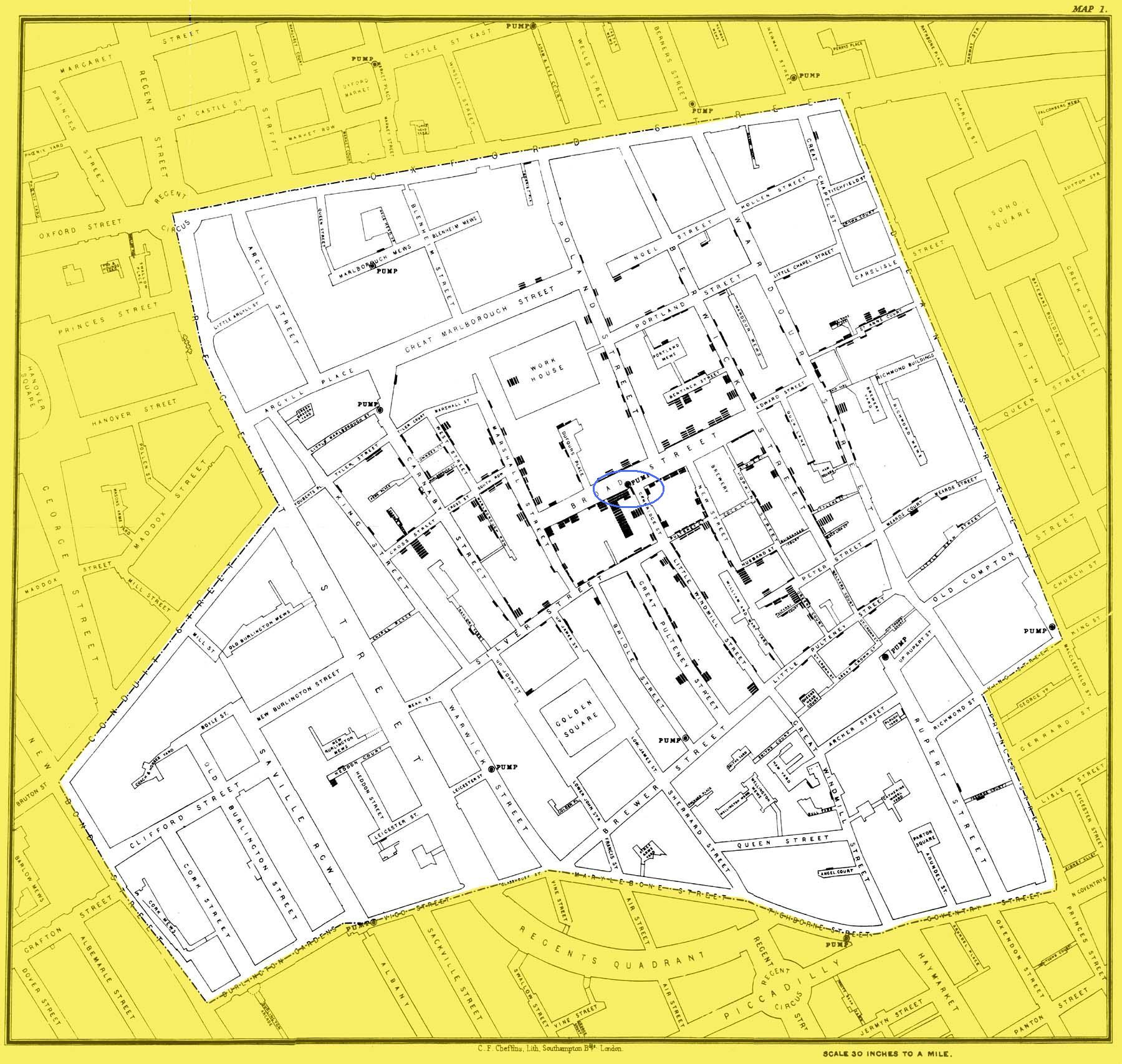 Dr Snow’s use of the phrase ” limited area” to describe the population in this region of London is small, relative to the remaining area which comprises London, according to that he suggests that the mortality proportion of the population for the area quite high. This map helps Dr Snow to point the location of the thirteen pumps to find the severity of water contamination and painting an image of the severity by use of graphical tools (Frerichs, 2009 ).

The disease spreads geographically, and effect and intervene in relation to human, climatic and environment, the GIS and remote sensing techniques are very useful used for early detection and response to infectious disease more easily and faster than other technique, that because GIS and remote sensing technologies connected with different kind of data to geographic location, not only tracking diseases spread but also laboratory specimen and locations of medical supply, vulnerable population locations, and medical staff  distribution (esri, 2009).

According to the World Health Organization, 78% of the people in Third World countries are still without clean water supplies until today, and around 85% of those people don’t live in areas that have sewage treatment, making cholera disease spread easily (WHO, 2018)

Today, scientists think that Snow is the pioneer of public health analysis in an excessively medical field. Snow’s research used the epidemiologists ‘ approach today. To formulate a hypothesis, he used his clinical knowledge and observations on the distribution of cholera rates (Frerichs, 2009 )

The idea of using map and collect data by Dr Snow turn today in desktop mapping revolution using in public health investigators,  such as Geographic information systems (GIS) to show the geographical distribution of individual or aggregate morbidity or mortality, and can use in scientific fields. (Howard Brody, 2000).

The GIS and remote sensing techniques used for early detection and response to infectious disease more easily and faster than other technique, The incorporation of traditional epidemiological statistical techniques into a GIS interface enables researchers to gain a better understanding of the spatial aspect of disease spread. (esri, 2009)