Perform a close, textual analysis of one of these advertisements. What does it imply about gender and/or sexuality? You should refer to concepts such as sexualisation, postfeminism, and/or stereotypes, and consider both femininities and masculinities.

The advertising I choose to perform: 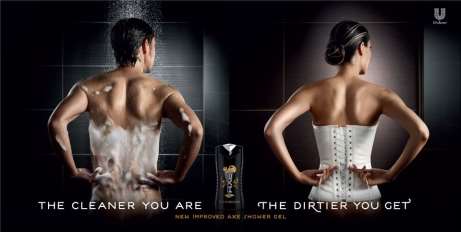 In advertisements which targeted at men or women are always objectifies to sell objects. This can be seen in many advertisements like the Axe. Yet according to the codes of gender, men and women are always represented differently in advertising. Men are always shown vigilante and lucid of their surroundings, standing higher up then women, eye open, bodies under controlled as an “independent, purposeful and clear thinking”(Hodkinson, P 2013, Media, culture and society, Sage, Los Angeles, ch. 11, p223) object. On the other hand, women are frequently shown laying down, touching themselves, bending their knees, sitting in a bed or on a chair, eye close, confused, body contorted, dressed up as sexy or sexually available, “appears subordinate, dependent, emotional and absent- minded”(Hodkinson, P 2013, Media, culture and society, Sage, Los Angeles, ch. 11)object. The depiction of women in advertisement representations, at the same time, has been a sign as part of a spacious patriarchal system of male dominance. Indeed, in the mainstream advertisements depictions, which emphasis women on getting and keeping a man, especially whin the domestic roles of wife and mother. It has been focused on by many feminist commentators in order to achieve gender equality. However, in nowadays, both femininities and masculinities are represented in many advertisements, though femininities and masculinities do not map onto biological sex, but gender issue is still shown in many different ways.

Throughout all forms of advertisements, it is obvious to see that we are live in a sexual world. Magazine advertisements, TV advertisements, commercials and ever internet advertisements are shown in a very sexual way and women are often been the objects of sexualization in the advertisements. “Sexualization is when a person’s value comes only from his/her sexual appeal or behavior, to the exclusion of other characteristics and when a person is sexually objectified”(Media’s Portrayal in Women, Laura Russell, The Sexualization of Women in the Media). Through many advertisements, it is easy to find that women are very sexualized and they are often portrayed as objects that draw men’s attention, even belong to men. According to the AXE shower gel’s advertising, the right side woman is dressed up, wearing a sexy vest in a very sexual way, with her shoulder and arms nude, coiled hair and we can indistinct see her sexy hip shape, while the whole image are shown as shown to get “the dirtier”. The advertising is showing that the women “need to look good and the need to get male attention”(Hodkinson, P 2013, Media, culture and society, Sage, Los Angeles, ch. 11, p225)and the word “dirtier” is making her seems inferior to men. With advertising such as AXE one, women that choose that they should treat there bodies as sexual subjects, thus, it is lead women to believe that is important and lost their personality. Along with these type of advertisements represented, men start to believe that the sexual picture of women that is what makes them attractive. With this sexualized advertisements that is being depicted in the media is become difficult to women to be accept their own appearance, hence, constantly compare themselves to those sexually images and lost self-confidence. Therefore, many other advertisements and some women’s magazines are inclined to treat women in low-down way, depicting women as objects in inferiority, subordination and low social power positions.“Women’s physical appearances – especially their sexual attributes – are portrayed as their most important assets. This is presented as liberating and empowering”(Brumberg JJ (1997) The Body Project: An Intimate History of American Girls, Random House). While women’s sexual expression is important in some ways, nevertheless, a woman’s value is not only dependent on her sexual appeal, woman can also be successful and independent with femininities.

During the 1970s and 80s second-wave feminism movement, the representation of woman have changed considerably. In the mass media, feminism has had strong criticism of the representations of women in visual world, particular advertising industry, along with the feminism movement, more then others, “the emphasis on domesticity, deference and traditional romance”(Hodkinson, P 2013, Media, culture and society, Sage, Los Angeles, ch. 11, p223) has been displaced by more independent, assertive depiction of femininity – “something that can sometimes include a proud and explicit quest for sex”(Hodkinson, P 2013, Media, culture and society, Sage, Los Angeles, ch. 11, p224). Women can be successful and independent, go out and get what they want. Link to the AXE advertising, the feature objectifying image of the naked man with shower gel has referred to as “post-feminism” that women have the ability to have sexual relationship on their own wants. Moreover, the confidence, successful and independent female figure also continually showing in advertising in nowadays. Chanel’s campaign for its Coco Mademoiselle perfume adverting in 2011, for instance, shown on connotations of women independence, by featuring images with a successful woman with the background song’s lyric “ this is a man’s world, this is a man’s world, but it would be nothing without women or girl” highlighted the independence and assertiveness of female – “ they consume autonomously, engage in relationships on their own terms and sometimes manipulate and exploit men”(Hodkinson, P 2013, Media, culture and society, Sage, Los Angeles, ch. 11, p224). However, back to the AXE advertisement, both femininities and masculinities are represented in this advertising but shown as different ways. On one hand, the man are presented as active, independent and all he do is cleaning and represented the product in a directly way in order to show his masculinities, on the other hand, the woman in this advertising was shown her femininities as well, but meanwhile, the way that the woman represented the product seems more metaphorically that the purpose of the woman use this product is all about get attention from male. This is against the center of the “post-feminism” and backword on gender stereotypes.

Currently, when it comes to representations of gender, advertisements often fall behind on well established gender stereotypes. However, in particular these days, the media always represented images of women in power, attempted to reverse old established gender stereotypes, these images seems against the more objectification of the role women used to be, so-called ‘challenging’ and even ‘feminist’. In the old times, “female objectification to the most media depictions of female sexuality”(Dworkin, 1981;MacKinnon, 1988), according to the mainstream media depictions, woman are frequently presented as “subordinate to and dependent on men”(Hodkinson, P 2013, Media, culture and society, Sage, Los Angeles, ch. 11, p222). This phenomenon was also represented on the AXE advertisement, shower gel for men is for clean, yet for women, it is a way to make themself more sexy and attractive in order to catch men’s attention, getting and keeping them, this advertisement seem to be reinforcing our stereotypical notions of femininities. In addition, commercials are one of the vast source of gender stereotyping that advertisers used in their work to targeted either male or female groups. While, woman are more often represented in commercials, because of they are seems seen as responsible for daily purchases as a householder, however, men always advertise things more masculinities, such as cars, computers or business products, otherwise women are represented femininities rather in the commercials with make-up, clothes and domestic products. And female are often shown in the home or inside environment, not the same as male, men are always shown outdoors. Moreover, the most popular that women presented in advertisements is the figure of housewife, their main problem in life is lack of ideas for housework or dinner, that is very stereotypical. The other stereotype for women is sexy seductresses, the desire of every man. They most advertise beauty products and fashion clothes, but they are also arise in the commercials directed to male. Furthermore, woman has been major care is to preserve her appearance, hence, this advertising image of “perfect femininity and heterosexual success is deemed to act as a ‘window to the future self’”of the audience. As a result, many women has been fall into the perplex with their appearance and body shape, which can have negative influences. Male stereotypes are also various and presented with masculinities as a ‘real man’, “athletic, successful, professional, seducer with a beautiful woman by his side”(). However, “ the growth of female employment and changes in attitudes towards gender have also contributed to ambiguities in the status of masculinity”(Hodkinson, P 2013, Media, culture and society, Sage, Los Angeles, ch. 11, p235).

In conclusion, gender issue has always been a controversial problem in advertisement industry, such as the AXE advertising, the concepts of sexualisation, postfeminism, and stereotypes are the main cores of the gender problem. However, along with the growth of feminism, female has been a large part of responsibility for the development of understanding of gender in media and advertisement. Female are should no longer been bounded in the tight ‘vest’, women should have the right to go out and do what they want, moreover, women should dress up for themselves instead of men’s attention. At the same time, the development of understandings of non-heterosexual – gays, lesbian and bisexual representations in media or advertisements remind us, the most important link between the enhancement of dominant understandings of gender, sexuality and generally constructions of both femininity and masculinity. Eventually, “ dominant representations of masculinity and femininity in media tend to be those that are most effective when it comes to the selling of advertising space or, indeed, the selling of consumer goods themselves.”(Hodkinson, P 2013, Media, culture and society, Sage, Los Angeles, ch. 11, p241)

Media’s Portrayal in Women, Laura Russell, The Sexualization of Women in the Media