With reference to the work of Higonnet and Holland, show how photographic depictions of children have changed over the last century. What are the strengths of photography as a medium for capturing the essence of childhood?

Photographic images provide us with a snapshot of the past and present, they hold past moment’s static for us to view even though they no longer exist. They provide us with visions of places and people we may never meet and fantasies, they are powerful for their seeming reality. Photography offers both reality and illusion. Photographs brings visual delight “…about the dream of childhood and its persistent nightmare” (Holland, 1992: 8). According to Higonnet (1998; 7) “pictures of children are…. the most sacred and the most controversial images of our time”. While they protect the ideal of childhood innocence images can also potential damage this ideal. Imagery is a vital part of social meaning they continuously provide viewers to new versions on subjects such as childhood (Holland, 2004).

In this essay I will look at how imagery of children have changed in the last century, focusing on the debates of how innocence and sexuality and the changes and sim 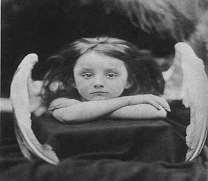 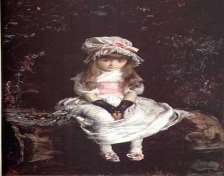 All visual images of childhood innocence was invented and refined by paintings and illustrations from the 18th century to the early 20th century (Higonnet, 1998; 78). They were then transferred into photography. Paintings and illustrations of children allow us to really see perfect innocence, however photographs does this more convincingly (Higonnet, 1998; 86). The notion of the romantic childhood spread into popular painting such as Image 1 by Sir Everett Millais which has since been reprinted and used in advertisements of soap, during the time of production this was associated with cleanliness and purity (Holland, 2004). I included this image as I feel it is important to see how elements of earlier paintings are used in contemporary images of children. In Cherry Ripe the young girl is dressed in typical romantic children’s clothing which has been related to innocence (Higonnet, 1998; 51). All romantic children wear costumes and have connections with nature just like we see in Cherry Ripe where the painting is set outdoors surrounding by nature and fruit. Julia Margaret Cameron ‘I wait’ displays angelic innocence depicted in early photography. Childhood innocence was viewed as sacred, pure and children are dressed in costumes of angels or cherubs to visualise this notion. 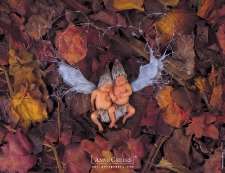 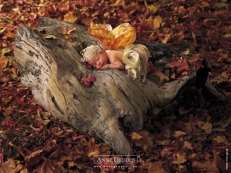 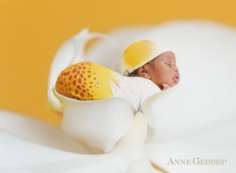 We see a continuation of these themes in photographs by Anne Geddes. Her images represent a modern take of today’s idea of childhood innocence (image 3, 4 and 5). These images are what we commonly see on calendars and greeting cards. In these images the children are dressed in costumes, wearing angel wings, dressed in white and have connections with nature. They represent childhood as being pure, vulnerable, close to nature and precious to be nurtured and loved. Just as we see in images 1 and 2 they represent the idyllic childhood and unspoiled innocence. According to Higonnet (1998; 78) “…Geddes make children’s bodies unreal and belong to an unreal world”. Digital photography and new technology has allowed this and images now have no limitations. The children in Geddes images have a magical feel the children seem unreal without making them enticing or available. Higonnet (1998; 78) states that successful commercial images like this make the children seem there and yet not there. Geddes photographs draw on childhood innocence just as earlier depictions of childhood by Julia Margaret Cameron (image 2) and paintings by Millais’s Cherry Ripe (1879 image 1) as they have similar themes in representing children as sacred in white clothing or dressed as angels and having connections with nature.

Many of today’s commercial photographs of children have the same characteristics of those from the 19th century where children are dressed up or are angels, cherubs, fairies and miniature adults They remain similar with their “…romantic precedents”, centred on making children’s bodies look innocent (Higonnet, 1998; 76). They all conform to visual expectations of childhood. “They show us what we want childhood to be” (Higonnet, 1998; 86), if images go against this idealised romantic notion of children being fragile, innocence and pure it causes discomfort to viewer’s convention of childhood and causes controversy. The early 19th century photographs of cherub and angelic children continues to carry a powerful visual reference as the quintessence of childhood (Holland, 2004; 9).

During the late 1980’s Sally Mann began to challenge the earlier ideas of the romantic childhood. Mann used her own children to represent her version of childhood. She captured their most vulnerable and natural moments, many of these photos contained them in the nude or semi-nude. Mann’s pictures displayed childhood in a natural form not the idealised versions from early images. 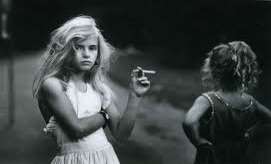 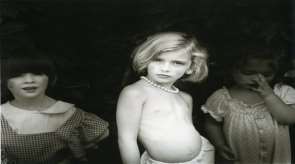 Image 6 and 7 captures how the children innocently play using simple props such as jewellery and candy cigarettes. On first glance this appears to be innocent however, they can also be a threat to the children in the form of potential sexuality.

In image 6 Mann’s daughter balances a candy cigarette in her hand and resembles how an adult would hold it. Her facial expression, posture and the way her hair is parted on the side makes her look older than her years. The background of the photo is dark making Jessie stand out drawing you to focus directly at her. This picture has caused controversy due to the children mimicking adults and smoking. Children do mimic adults in their play. She is not smoking a real cigarette she is pretending. I feel this image displays how children are losing their innocence why also being innocent young girls enjoy trying out adult roles in their play scenarios (Holland, 2004) and are influenced by what they see in their daily lives. This image reflect the reality of how society affects children, they are copying actions what they see through media and their daily lives and are applying it to their play.

In image 7 Jessie at five the central girl snakes outwards highlighting her naked torso, her pose has a sexual tone, she lures at the viewer, her shoulders are placed in an inviting way to show off her bare chest as if she is inviting you to go to her. She wears a pearl necklace, is made up with lipstick this makes her look like she is in her teens, or modelling for a fashion magazine. This conveys “… conflicting messages of childhood innocence and adult sexuality” (Higonnet, 1998; 195), if you were unable to see her pre-pubescent body people could be easily confused to thinking she was older. Due to the posture and lack of clothing of Jessie, it suggests it could be sexually intended rather than children simply playing dress up. Jessie contrasts the two other girls pictured dressed in traditional clothing of childhood innocence. I feel that Mann’s work displays more realistic images of childhood than earlier images, children are not always angels and pure as suggest in the 19th century. Children enjoy experimenting playing adult roles and these images capture children doing precisely this.

Mann’s work remains a subject of controversy due to the nude and provocative images of her children which aroused great critical debate as it challenged the romanticised essence of childhood (Scally, 2012). It has also been suggested that Mann is sexualising her own children putting them at risk of sexual exploitation. According to Zurbriggen et al (2003) Mann’s images make young children vulnerable. Savage (2011; 109) argues that Mann’s images has “…the ability to unnerve, to represent without apology, and to suggest the sensuality on childhood play and, perhaps inadvertently shatter the myth of innocence”. Supporter of Mann’s work argue that any sexual thoughts that arise from these images are a “…result of less-than-innocent readings” (Savage, 2011; 107). Mann has defended herself, stating that her work is “natural through the eyes of a mother, since she has seen her children in every state: happy, sad, playful, sick, bloodied, angry and even naked.” (Independent, 2010). According to Higonnet (1998; 203) Mann’s pictures upset cherished conventions of idyllic childhood. These images do not conform to the idealistic view of childhood they create discomfort as the go against social norms and unsettle traditional representations of childhood (Miller, 2005). In my opinion these two images???. Something about child abuse.

During the 1980’s childhood was under attack and was being pushed into adulthood by the mass media (Elkind, 1981; Postman, 1982). Many academics note that this was a time when childhood as we once knew it was lost. Postman (1983) argues that television and the use of children in advertising of clothing and adult products has influenced the disappearance of childhood as there has been a tendency to advertise children wearing clothing which resemble adult fashion, this is seen in image ? and ? Reference in hendrick chapter 2. 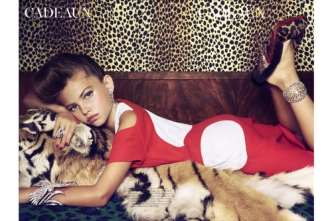 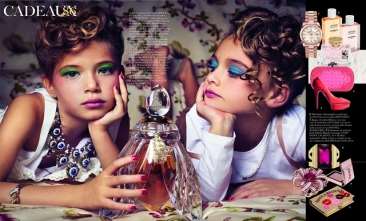 Images ? is from a French edition of Vogue magazine. The young model is photographed high heels, lots of jewellery and heavy makeup. She is placed upon leopard skin. She is dressed in adults clothes her pose is confident and serious she is not smiling. According to Boulton (2007) this is a sign of dominance, when children mimic this powerful look they convey a sense of adult-like self- awareness often associated with precocious sexuality. The most worrying part of this image in the title “Cadeaux” which is the French word for gifts, suggesting the model is a gift. Images like this with suggestive words have dangerous potential to exploit childhood by introducing adult sexuality into childhood innocence (Walkerdine, 1996; 326). What is seen as a fantasy for a young girl playing dress up can easily been transformed into a different fantasy for predatory adult men (Holland, 2004; 188). Children are increasingly subjected to social and economic forces that exploit them through the dynamics of sexualisation, commodification and commercialisation (Giroux, 2000; 44). Their innocence can often mask the sexualisation. The image of childhood innocence is now in jeopardy not just because it is being violated but because it was seriously flawed all along. The ideal of the child as object of adoration has turned too easily into the concept of the child as object and then into the marketing of the child as commodity (Direct quote, Hig, pg 194).

Innocence feeds into enticing images of childlike purity as it simultaneously sexualises and markets such images (g, 60).

The image of childhood which was created in the 18th century has changed and has been replaced with new ideas and ways to picture childhood (Higonnet, 1998). Photographs have the ability to provide visual realism to a

The notion of the disappearing child and the myth of childhood innocence often mirror and support each other. Within the myth of innocence children are often portrayed as inhabiting a world that is untainted, magical and utterly protected from the harshness of adult life (Giroux, 2000; 39). Innocence in this instance makes children invisible except as projections of adult fantasies (40).

Holland, P (1992) What is a Child? Popular Images of Childhood, London: Virago Press

Miller, Andrea. “Portrait of Family Values: Transgressions and Controversy in the Work of Sally Mann.”

Art or abuse?: A lament for lost innocence