Discuss the impact of digital technologies on the creative industries, with special focus on one sector. Give at least two example

The worldwide blast of digital technologies has had an impact on creativity, innovation and business models found in the creative industries. On the contrary of the 20th century which was known for mass-consumption, the 21st century is highly likely to represent mass-innovation through the introduction of digital tools. In figure 1 below, we can see a representation portraying the effect that digital technologies left on the creative industries. Furthermore we can also analyse the evolving relationship that exists between the producers/ designers and consumers/ user. In this representation we can also see a list of sectors which form part of the creative industries. From this list I am going to focus on filmography and analyse how Digital Technology had an impact upon the Filmmaking Process. (Pinder, 2015) 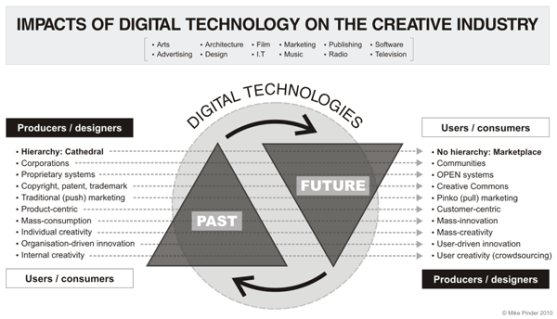 Digital Technology with regards to filmography did not evolve the production process as a whole but rather it evolved in different segments.Therefore in this essay the production process will be refer to as the pre-production, production, post-production, distribution and exhibition of film. Although some might argue that some sectors of the movie industry are dying one should keep in mind that the industry is shifting and moving towards two pillars: higher-quality visual and sensorial experiences in the theatre. (Lhooq, 2012)

Before a film is even made, in the pre-production phase, software and packages that help in writing the script of the production, like Final Draft and Movie Magic, prove that digital is also being exploited at such an early stage. Such software are software used to write and format a production so as to be able to reach the level set by the film industry. Such packages has been on the market long before the notion of digital filmmaking came about.

Digitalcamerasare much like Polaroid cameras in the sense theygive thefacilityto capture images and see themstraightaway. Furthermore, digital technology is also helpful toother departments in filmography such asmake-up and wardrobe. These departments have the ability to capture hundreds of images for later review without the need to rely on expensive and unpredictable Polaroid still. Digital cameras bring about a lot of economic and environmental advantages this is because throughout the whole production of a film the reduction of unused photos is significant. In addition there are other advantages that arise from digital technology over tradition film such as video playback.

It is for a fact that digital technology gives filmmakers more flexibility and control over their work.Robert Rodriguez in the article by Corliss states that writers and directors, shoots and cuts their production while managing special effects from their own home. He also admits that he shot his Sin City actors in front a green screen, then, he edited the backgrounds using digital technology. (Corliss, 2006, 38)

It is not only the large production houses who are taking advantage of digitaltechnologybut ‘guerrilla filmmakers’ are also making huge advancements in the production of their films. These filmmakers are using to the utmost digital technology so as to produce production similar to the ones of the huge production houses. An example of a guerrilla filmmaker is Perry Ogden, who is the director ‘PaveeLackeen: The Traveller Girl’ (2005). The camera he used was a Sony PD150 camera and made use of digital technology in many ways including the following:

Ogden claims that it was not accidental the image lacked resolution but that he was inspired by AnthonyDodMantle’s work.(Fair, 2006)

Another novelty that is emerging is the documentary genre. Many documentaries are taking greater advantage of DV than drama. The box office successes such as ‘Iraq In Fragments’ illustrate the true ability of shooting quickly in difficult locations.

Another major advancement in filmography thanks to digital technologies was made when there was the birth of drones. These flying robot cameras represent a huge saving for productions that are seeking images from high in the sky, with a cost as low as one third of the cost of traditional transport like helicopters. (Fair, 2006)

In the post-production section of filmography digital non-linear editing gave a new aspect to video editing, in much the same way you can edit a word document. This is why post-production was one of the main areas which embraced digital technology. Surely it has impacted the creative control in such a way that a scene can be cut and re-cut continuously without making any damage to the film stock and also without major expenses. Non-linear editing is not the only part that was established but one of the greatest improvements is Computer Generated Image (CGI) effects and animation. In the article by Corliss, Stephan Spielberg is quoted stating that one of the advantages of CGI is that now directors have the ability to follow their imagination. It is because of speed and the economic impact that digital cameras are preferred over traditional cameras.

New technologies are effecting the distribution of films in a way that nowadays people can view films on portable devices anywhere in the world. Films can be uploaded and watched at the user’s discretion. The user can pay for films and download them off the internet although this advance is also giving the ability for users to download films illegally, free of cost. But although all these improvements in how one can see a film are taking place, the most popular way to view a new film is still the cinema. This might be because of the new equipment that cinemas are investing in so as to give the viewer a true experience.(Anthony, 2012).

As oppose to celluloid prints which are damaged every time they are used for projection and are often ruined after a couple of uses, digital film is transported to the cinema on a hard drivewhich is then uploaded onto the digital projector an could stay there for several weeks. Digital prints have made it possible that new films can be projected at the cinemas around the world mostly at same time because digital prints are cheaper to duplicate than celluloid prints. Another advantage of digital projection is that it can be used for more than one form of entertainment, that is, it can also be used to display sporting events, opera, musical shows and much more. Such showings change the whole meaning of cinema because it could bring different costumers to the cinema.Around 60% of all cinema screens worldwide in 2012 were converted to digital projection from the tradition film. More than half of these cinemas offer 3D projections and by the end of 2015 almost every cinema screen will be digital. Regarding 3D projections there are multiple instances where this sector is still evolving thanks to innovation. An example is the abolishment of the 3D chunky glasses. Thanks to“lenticular lens technology”that is, bumpy screens that redirect light to each eye, allows us to process two different images at the same time (the way we do in real life), which gives the perception of depth. A second solution is the“parallax barrier”.This technique uses a device which is set right in front aliquid crystal display, to allow it to show astereoscopic imagewithout the need for the viewer to wear3D glasses. Two main companies, Toshiba and Sony has already started working on these 2 technologies and in 2009, Fujifilm released theFujifilm FinePix Real 3D W1digital camera, which features a built-in auto stereoscopic LCD display measuring 2.8″ diagonal.(Anon, 2015)

Although 4D-cinema is already something in the years it is expected to continue developing. Seats in 4D venues may move during the screening according to the scene being shown. Physical effects such as rain, water, wind and even smell might be simulated in 4D and this is even backed with a special sound system allowing the audience to reach maximum immersion in what is happening on the screen.

Whilst in our rapidly changing world we have doubts about what is here to stay, it would be reasonable to say that digital technology is the present and is likely to be present as well in the future. We cannot say how it will evolve, but evolving technologies will without any hesitation continue to make an effect upon the creative industries especially on filmography.