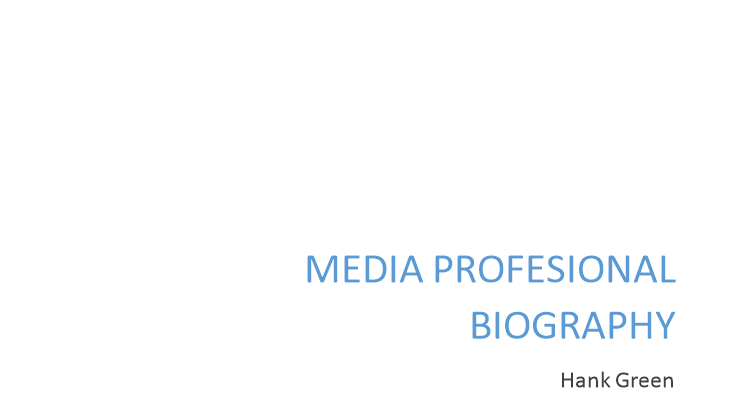 William Henry “Hank” Green was born on the 5 May 1980, he is an entrepreneur, musician and vlogger (goodreads, n.d). In 2007, Hank Green uploaded his first video onto the YouTube channel VlogBrothers as part of a project called Brotherhood 2.0. The goal of this was to communicate with his brother John solely through video blogs for a year, with the possible exception of phone calls (Green, 2007). After brotherhood 2.0 ended, Hank and John agreed to continue producing video blogs (Burgin, 2013). As of today they have over 2.5 million followers, and 1300 video uploads (VidStatsx, 2015). Green is also involved in numerous other channels. He and his brother John created and developed the educational YouTube channel Crash Course (PBS, n.d), he is the creator (Green, n.d) and a host of SciShow, a science education YouTube channel (Stone, 2014), and a developer of the Lizzie Bennet Diaries (LBD), a web series adaptation of Pride and Prejudice (Pemberly Digital, n.d). Green created Vidcon, a conference for fans of online video in 2010 (Green, n.d), and is a co-creator of the Foundation to Decrease World Suck (Kliger-Vilenchik, 2013, p. 10), a non-profit fundraising foundation for other non-profit organisations (The Foundation to Decrease World Suck, n.d). Additionally, Green interviewed the president along with two other YouTubers after the State of the Union address (Colin & Megan, 2015).

Industry Convergence refers to “the blurring of boundaries between industries, induced by technologies and markets” (Bröring, et al., 2006, p. 487). Green’s YouTube channels, Crash Course and SciShow were originally funded through a YouTube grant (Mayrer, 2012), however, they have now partnered with the Television Network PBS Digital (Gutelle, 2014). Furthermore, Crash Course is now available on DVD (DFTBA Records, n.d) as well as SciShow (DFTBA Records, n.d), a demonstration of Content Convergence. In addition to this, The LBD web series likewise exhibits components of Convergence, evident within its transmedia narrative. Transmedia is a mode in which fans are encouraged to observe characters from a narrative beyond the constructed barriers, resulting in access to more information and further immersion in the story (Stanfill, 2013). LBD portrays Lizzie Bennet and her sister Lydia Bennet as vloggers, and Jane Bennet as a fashion blogger, with the story taking place over a wide range of social media platforms (Stein, 2013). As well as Media Convergence, Globalisation has additionally impacted on Green’s Career.

The increasingly globalised nature of the media and technology industries have enabled Green’s significant contributions to charity and education throughout his career. Globalisation refers to the growing scale and effect of “transcontinental flows and patterns of social interaction (…) a shift or transformation in the scale of human organization that links distant communities and expands the reach of power relations across the worlds regions and continents” (Held and McGrew quoted in Flew, 2007). Moreover, Warlaumont brings attention to the internet’s role in globalisation due to its ability to connect individuals through digital mediums, allowing communication between groups of people from different cultural backgrounds and lifestyles (Warlaumont, 2010). Hank Green has utilised the potential impact of his global audience, through advocating his support of numerous charities, and co-founding organisations such as the Foundation to decrease World Suck.

Not only is Hank Green’s career one I would wish to emulate, but his passion for the YouTube platform, as well as his audience, is inspiring. Hank Green started video blogging in 2007, originally when there was no way to monetise content. Throughout Google’s acquisition of YouTube, and YouTube providing grants to channels with the goal of creating additional content, Green’s goal remained the same, to provide content that is engaging and rewards viewers with an enriching and educational experience (http://www.usnews.com/news/stem-solutions/articles/2015/03/11/hank-green-loves-science-and-wants-others-to-love-it-too). Furthermore, the community that has developed around Nerdfighteria has provided a safe space for individuals and groups to discuss ideas and values without judgement. Vidcon, is a physical representation of the public sphere, in the sense that it is a space where individuals can gather out of a shared desire to debate, discuss and arrive at a deeper understanding of the ideologies surrounding the YouTube community, and broader communities as a whole (http://capitalistcreations.com/the-vlogbrothers-have-turned-passion-into-profits-and-popularity/). Furthermore, he has brought attention to media bias, as a result of the negative press regarding his interview with President Obama. In publicly condoning the bias of organisations such as Fox News and CNN, he has essentially acted as a watchdog for the watchdogs, through policing the organisation that is designed to hold those in power accountable. Hank Green is a forefather, and driving force in the YouTube community (http://missoulanews.bigskypress.com/missoula/hank-greens-business-is-just awesome/Content?oid=1582736).He represents not only what an individual can achieve, but of the possibilities attainable from collaboration.