The topic that we chose to do a research on is a film named Enchanted. The film was released in 2007. Enchanted is a romance comedy film which contains live-action and animated fantasy. The film tells a story about a girl named Giselle. She was pushed into a magical well by her prince’s stepmother which brought her to the reality world, the modern New York City. She tried to coop with the new surroundings instead of living happily ever after in her fairytale castle with her prince. Giselle met Robert who helped her to face the reality of the world. Giselle learnt that true love is much more complicated that sharing only a “true love’s kiss” with her prince.

The main reason we carry out this research is to find out if college student perceive Enchanted as children based movie or adult based movie.

Selection perceptive theory is the process where individuals perceive on what they want to see in the media while dismissing any negative viewpoints. In a broader term, it is where people tend to view things based on the concept of favoritism and their prefer frame of references. It is describe as categorize sensory information that favors one over the other, meaning selective perception is bias because we interpret message that goes against our beliefs and thoughts. Of course, this is only true when our perceive perception is counted as accurate. But if selective perception caused us to dismiss important points and information, this type of perception is highly detrimental.

This theory based on human judgment and decision making that is distorted by an array of cognitive, perceptual and motivational biases. There are evidences that suggests that people tend to recognize and even overestimate the operation of bias in human judgment except when that bias is their own. Aside from the general motive to self-enhance, two primary sources of this ‘bias blind spot’ have been identified. One involves people’s heavy weighting of introspective evidence when assessing their own bias, despite the tendency for bias to occur unconsciously. The other involves people’s conviction that their perceptions directly reflect reality, and that those who see things differently are therefore biased. (Emily Pronina, Department of Psychology, Princeton University, Green Hall, Princeton, NJ 08540, USA).

Another source of the bias blind spot involves the fact that others see things differently from ours. People are particularly likely to deny bias in themselves, whereas they will impute it to others, when those others have a different point of view and when they for example rebelled against their government policies and governance are then tend to imputed more self-interest biases than the government supporters. (48 G.D. Reeder et al., On attributing negative motives to others who disagree with our opinions, Pers. Soc. Psychol. Bull. 11 (2005), pp. 1498–1510.) Of course, there are least some evidence that that people are more likely to acknowledge their susceptibility to biases that are less undesirable. (E. Pronin et al., The bias blind spot: perceptions of bias in self versus others, Pers. Soc. Psychol. Bull. 28 (2002).)

Research is the first management process to define the problem. The first step involves probing and monitoring knowledge, opinions, attitudes, effected by the acts and policies of an organization. In essence, this is an organization’s intelligence function. It provides the foundation for all the other steps in the problem-solving process by determining, what is happening now?

We created a questionnaire for mass media research in order to collect data about what TARC College students think about the movie Enchanted whether it is suitable for children. 50 of students completed the questionnaire between 12 November2014 and 19 November 2014.The results are recorded as below. In this research, we asked a variety of questions in which I think would be helpful when produce a children based movie. 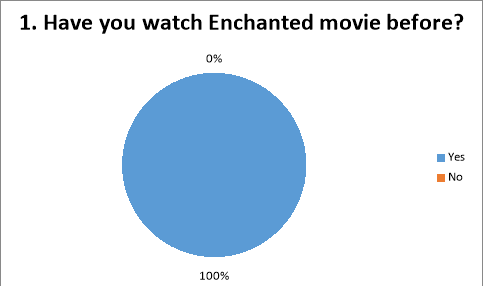 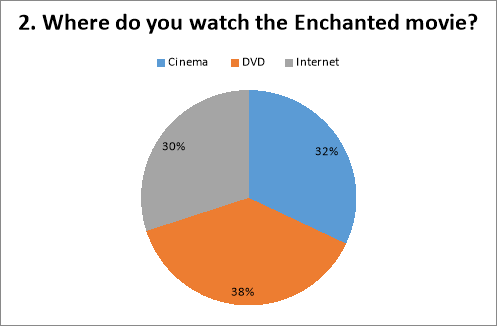 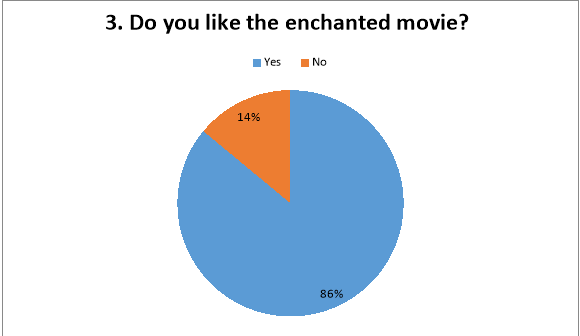 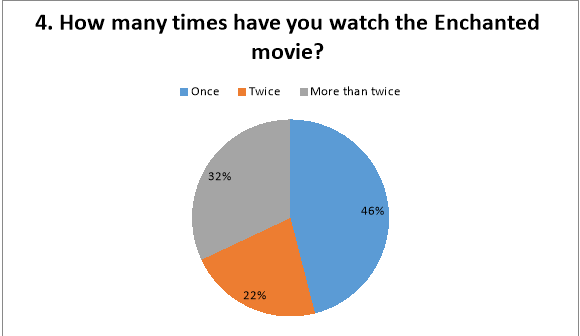 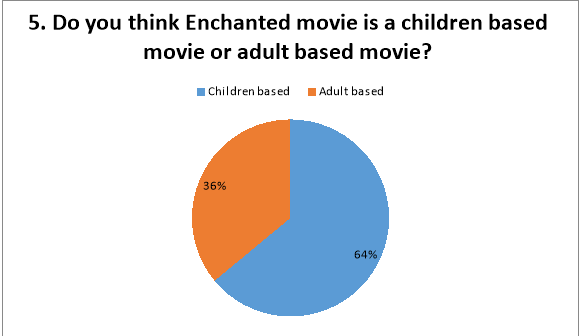 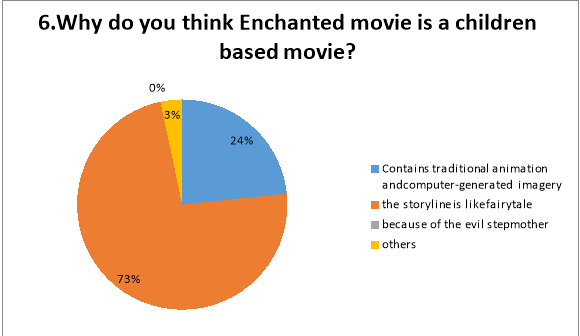 As it can be seen in pie chart above, it shows that the reason why our target audiences think Enchanted movie is a children based movie. Majority of TARUC students (73%) said that the storyline is like fairytale which is the most popular answer. The next popular answer is ‘it contains traditional animation and computer-generated imagery’ from TARUC students. There is no student who choose the answer, ‘because of the stepmother’. Only 1 student chooses ‘other’, she said that the dialogue of movie is easy to understand so it is quite suitable for children. 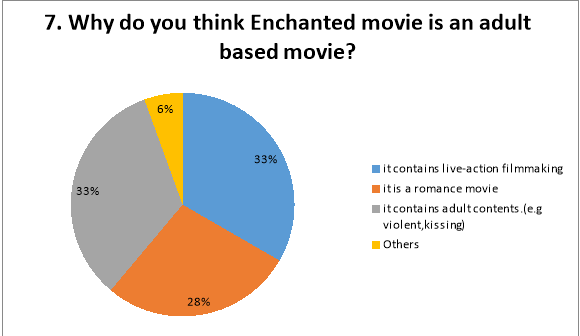 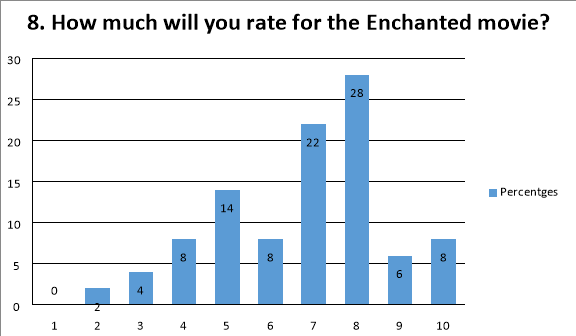 With the help of the research, we found of that students of Tunku Abdul Rahman College perceive Enchanted as a children based movie. They strongly believe that it is suitable for children. From the college students’ point of view, they believe that it is a children based movie because they think that the storyline of the movie is like a fairytale where there will always be a happily ever after ending.

In our opinion, we think that both answers chosen by the college students has its different perception. According to the theory that we used, selective perception theory, it is where people tend to view things based on the concept of favoritism and their prefer frame of references. Most of the time we will never get a 100% answer as different people have different views. Some people may choose to believe it is an adult based movie and some people might choose to believe it is a children based movie. It proves to us that people view things based on their own concept and thoughts.