PART A: Survey and Data

Channel 4 is a British public service television broadcaster (PSB) based in London, United Kingdom. It is dedicated to provide innovative, alternative content that challenges the status quo (Channel website ref). By design, Channel 4 was somewhat unique by comparison to its UK counterparts in BBC 1, BBC 2, ITV and Channel 5 in that it is a unique model framework is that of a ‘publisher-broadcaster’ (Channel 4, 2019). So it doesn’t utilise an in-house production team for content but directly commissions content from UK based production companies (Channel 4, 2019).

Channel 4 reinvests all profits back into its programmes, so as a result this cross-funding strategy (see figure 1) enables profitable programes to financially offset less successful programmes that are delivering the PSB’s remit (Channel 4, 2019).

One of the main listed commitments for Channel 4 under is Diversity and representation. It’s charter, year after year, lists their key target is ‘to appeal to people whatever their culture, nationality, religious persuasion, physical and mental ability, sexual orientation, gender, race or age’ (Channel 4, 2019, n.a.).

In January 2015, Channel 4 developed it’s 360° Diversity Charter, which focuses on a commitment to increasing diversity and ethnic minority representation both in front and behind the camera; to truly reflect the diversity of Britain today (Channel 4, 2019, n.a.). In supporting its claim to being diverse, it specifically highlights Desmond’s – the first black sitcom first broadcast by Channel 4 in 1989, to the World Para Athletics Championships in 2017, as some of their achievements in bringing forward neglected experiences and perspectives into the mainstream audience

Channel 4, 2019, n.a.). However, the reference to Desmond’s belies the actuality of Channel 4’s diversity. This gap in the bridge between policy and reality has created the need for enquiry. This essay will explore the relationship between the UK produced ethnic minority TV series Desmond’s (1989-1994) and its repeat rights or rerun pattern on Channel 4. The current absence of Afro-Caribbean sitcoms and TV series counters the ethos of the charter and from here we can address potential opportunities to engage the charter in terms of new writing entrance programmes, scheduling strategies, amongst other modes that could turn the situation around positively.

Desmond’s was an Afro-Caribbean British television situation comedy broadcast by created by Writer Trix Worrell for Channel 4 from 1989 to 1994. Desmond’s became Channel 4’s longest running sitcom in terms of episodes with 71. Desmond’s was not the first black sitcom on British TV – that would be The Fosters, which ran from 1976 to 1977, featuring Norman Beaton and Carmen Munroe (who went onto play Desmond and Shirley Ambrose) and a young Lenny Henry. That show, however, was not an original creation, adapted from US sitcom Good Times. (The Guardian, 2019).

The rerun can best be defined as a TV or radio performance that plays a show again, after its first broadcast has been completed. The TV rerun has become a by-product of mass culture and programming strategies have evolved as a result (Williams, 2010).

Creator Trix Worrell provided insight into his difficulty in getting the show green-lit by Channel 4 executives: ‘I didn’t write Desmond’s for black people,” says Worrell. “I wrote it for white people so they could see how black people really are.’ (The Guardian, 2019).

Looking at the TV scheduling for Channel 4 in 1989, we could say that Channel 4 was providing a fairly consistent amount of content that reflected its diverse audience.

On a Thursday or Friday night we could view reruns of                        The Crosby Show (1984-1992) from 6:00pm, followed by its spin-off                       A Different World (1987-1993) and then Desmond’s at 8:00pm. This was almost back-to-back viewing and reflected the lives of both Afro-Caribbean, African American families and 18-24 year olds from middle-class families. More importantly, it showed educated, professional families living in well-furnished homes they had paid for, running independent businesses in the community and sending their children to respected universities . This indirectly countered the negative media image of ethnic minority groups being shown literally minutes before on Channel 4 news. The rerun scheduling following the conclusion of Desmond’s in 1994, showed gradual pushback i.e. later and later viewings on quieter nights and times. How likely would a dedicated audience continue to watch a rerun TV series at 04:00am on a Tuesday morning?

18 years later Desmond’s returned to British television, but only via niche broadcaster, The Africa Channel. Reruns of the sitcom have been shown in the US on Black Entertainment Television (BET), Paramount Comedy and the government sponsored access channel NYCTV up until 2007. In the same period, the DVD season box-sets for series one and two were released on DVD. Up until then it was impossible to watch the show in the UK (The Voice, 2013).

By comparison, shows like Frasier long since its final season, still has its reruns shown on Channel 4 from 08:00am every morning consistently. Despite the positive nostalgia of having Desmond’s shown again on All 4, there’s nothing different or innovative that reflects progress (The Guardian, 2019). Diversity is continually being pushed for on a policy level but current content doesn’t reflect this (Broadcast, 2018, n.a.). The opportunity for UK based ethnic minority writers here would be to fill that 6:00pm Channel 4 slot with original content because it already has a kind of socially nostalgic memory with minority audiences. The Afro-Caribbean audience can remember the time when The Crosby Show would be shown at that time far more readily than most TV shows in the same vein that The Fresh Prince of Bel Air (1990-1996) would always run on BBC 2 from 6:00pm Tuesday nights. The trend noted from the data collated is that the absence of ethnic minority sitcoms is consistent throughout the different periods.

Following the conclusion of Desmond’s, Channel 4 did attempt to replicate the success of the show quickly by producing spin-off Porkpie (1995-1996) written by     Trix Worrell also and the BBC 1 did the same with Meet the Crouches (2003-2005) and both shows even went as far as offering roles to former cast members from Desmond’s. Neither lasted long as Porkpie was rushed and showed poor world-building and Meet the Crouches had a White British Writing team who had very little engagement or experience with writing for ethnic minorities (Francis, 2013).

This is further reinforced by Ofcom’s 2015 PSB Diversity Report which articulated that diverse communities did not believe that PSB’s were making authentic creative TV shows that reflected their lives (Ofcom, 2015). Ofcom’s 2017 report Diversity and equal opportunities in television;showed no sign of progress in saying that broadcasters had a responsibility to widen the talent pool on and off screen caused by the lack of ethnic minority representation being allowed into television – ‘creating a cultural disconnect between the people who make programmes and the millions who watch them’ (Ofcom, 2017, n.a.). Medhurst concluded that if there were more sitcoms about ethnic minorities who had more involvement in the production process, there would be less reliance, expectation and ‘burden of representation’ on shows like Desmond’s and The Crosby Show (Medhurst, 1989). 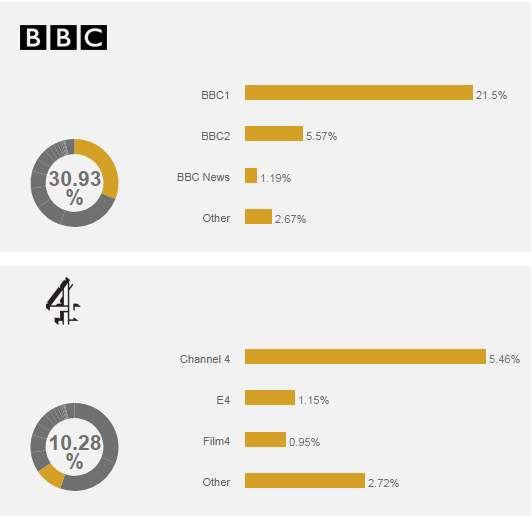