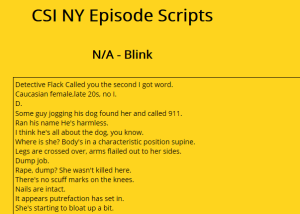 My task is to create a script of a pilot episode of a new television programme, and also create a double-page spread promoting this pilot. My script must follow the same technical aspects of those seen in professional ones, so for this I am going to use the BBC script template for a drama. First of all, after doing a large amount of research into genre, I have chosen the genre of ‘crime-drama’. For this, I will study other scripts that are already in existence. The scripts I will be looking into will only be ones of the crime-drama genres. Doing this research is going to extend my understanding of what is expected in my script. As my crime-drama is British, I will be studying scripts produced the UK. Some of these include the series ‘Prime Suspect’ and ‘Mid-Summer Murders’. I am going to read scripts from CSI New York (see figure 1) and True Detective to further increase my knowledge of narrative structures within this genre, even though this is not what I will be basing my script on.

From my research I developed a list of the layout that is similar within each script:

For my genre, I have chosen a crime-drama, this is the most suitable places to be to keep the tension alive, and it would have to be dark, murky places that would chill viewers. The scenes in my script usually take place at night. ‘Prime Suspect’ contains most scenes in the police office at night and also dark bars/ nightclubs etc. For ideas for settings in my script, I researched into other scripts already in existence and similar to my pilot. I ended up deciding in a big city, because there’s always a hidden enigma in a big city and also the idea that everyone has secrets, and that criminals have many places to hide in big cities. It seemed like a good setting for crime-drama, although it is a similar setting to many crime-dramas already in existence.

I wanted my whole narrative to be based around ‘Barthes’ theory of narratives. This would suit my pilot perfectly because it’s all about enigmas and having the audience attracted to watch the show to find out the secrets of the characters, and what they contribute to the show. Within the programme ‘CSI New York’ there is many sub-stories in each episode. The show usually keeps the story of a murder and detectives trying to figure out who the culprit is, yet there is also a story just for the viewer to see, usually being the back story of different people who could be the ones who committed the murders. This gives a sense of edge over the detectives, leaving the viewer’s guessing and hinting towards who the murderer is. Bearing in mind, there are many characters who share similarities in the office in CSI. I want my pilot to be like this, with all the characters interlocked in some form, whether working together, married, friends, or even murderers and their victims. This ended up in the idea that interweaving narratives, where characters have something in common to add to the storyline, and end up in the same situation together as the other characters. This idea for interweaving narratives seemed like a good idea for my pilot, as it would add more effect to the situation that’s happening, and build up the suspense more. 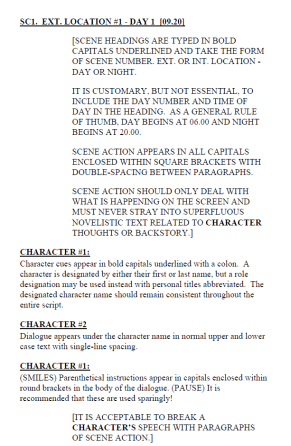 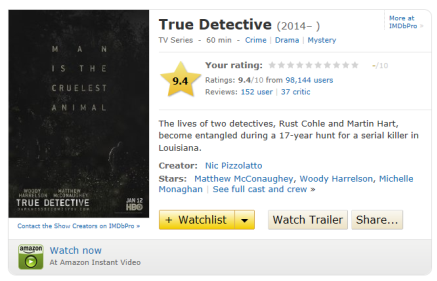 True Detective is a very popular television programme in America. To keep the same effect and enigmas as this series has, whilst still keeping a hint of something new and refreshing for the audience to experience. To take a new turn where the audience can guess the culprit, and instead keep them guessing until it is revealed. I have watched a few of the first episodes of ‘True Detective’ (as referenced in figure 2). However, I didn’t want my pilot to be similar and repetitive like some shows in existence already, therefore I am going to use a similar setting, however give it a new story and characters that would appeal to this TV show. To create my characters I am going to use Propp’s Character Theory, this is where the narrative has seven particular roles for characters within it. These roles would be the antagonist, protagonist, the dispatcher, the helper, the donor, a princess and a false hero. In my pilot there aren’t enough characters to cover all of these, so I am just applying these roles to a few characters. 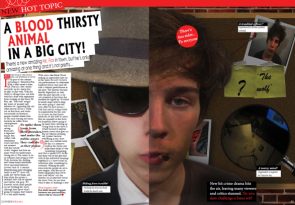 For my double page spread, I wanted something that would attract an audience immediately as they see it so I decided on a large, centred image. The close-up in the centre of the pages that takes up nearly all the space was my main attraction, because it creates an illusion that there is a different person on each page. I wanted this effect so I centred the photo in the middle of the two pages so when it folded over it would be exactly at the fold. As for the text, I wanted only one small area of text, placed in the bottom left corner because this would leave room for the central image which I wanted to be my central focus. I looked online for more double page spreads for a crime series. The college provided a few page spreads which I liked the style of so I changed the colour scheme to what I thought would look good (yellow, red and black.) I used these because the connotations behind these include romance for red (for my interweaving narratives of the story of love), and also danger for red. For yellow, the connotations include police tape and warning signs etc. The colour scheme suited the crime drama due to the connotations the audiences would get of danger and crime scenes and mystery from the dark colours, red black etc. 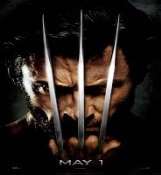 I used a close up shot on my double page spread because I thought it would be effective on the viewer, as they would like to figure out who the man on the cover is. The effect I wanted to have on the audience was to create mystery in the character. I also got the idea of the close up menacing face from the wolverine poster I found on Google images. I thought the close up would be effective as well as the face split half and half to show my two characters inside one person. Perhaps the readers would like to know why it is split, and read the text and find they interested in watching the show. The close up of characters on poster creates tension.

In my project I used many pictures in my double page spread, because I had many pictures to choose from, so I decided to make a police-style pin board, however when I did this I had the problem of not having space for it, I didn’t know where to place this large image. My background was originally meant to be a crime scene (as you can see on the image on the right, figure 4), but the problem with this is that the pin board didn’t look like it was meant to be there, however I wanted to keep it because I spent a lot of time and effort on it. It included 3-5 of my images and I thought it would suite the theme.

One of my main strengths to help me throughout the project was using the right images I had to create a professional-looking double page spread. I had many images to choose from when creating my double page spread and I thought this gave me an advantage, I had an option. But choosing from these I encountered many problems ranging from colour, size and layout. However I overcame these by trying different styles, whilst keeping to a similar trait to the page spread I was given. Doing this right, I felt like I satisfied the needs of the audience by getting the design and layout right.