Today, we live in a world that runs on information. Information is gathered, shared, bought, and sold. More and more, individuals are consuming vast amounts of information and using it to shape themselves and the way they perceive the world around them. In our journey to reach new heights of understanding, we construct for ourselves a tall watchtower, with each brick being a new piece of information. Far too often, however, we don’t ask ourselves a crucial question: what if this new brick has cracks? My goal is to explain why you need to be able to appraise the quality of the information you consume and to give you the tools to do so reliably and efficiently. 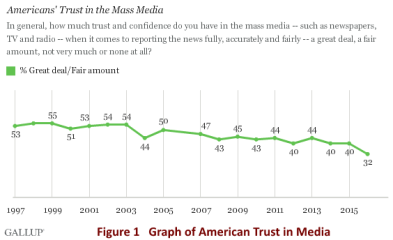 One of the most commonly used sources of information is the news, specifically the mainstream media. In recent years, there has been a gradual, observable decline in the quality of journalism. Noticing this, the American people have subsequently displayed a gradual decline in the level of trust they place in the mainstream media’s ability to report information in a trustworthy and unbiased manner. In a Gallup poll conducted in 2016 with a random sample of 1,020 adults, only 32% professed to having a great deal or a fair

amount of trust in the mainstream media.[1] A graph of this trend is provided in Figure 1.

In order to better grasp the methodologies of information analysis, and the need for such skills, a practical demonstration is best. On November 20, 2015, CNN published an article alleging that President-elect Donald Trump made a definitive statement regarding the implementation of a “Muslim database”.[2] Several hours later, an article was published by the Gateway Pundit claiming that the conclusions presented by the CNN article were based on falsified evidence.[3] Figure 2 provides a side- by-side view of the article headlines.

This leads to the first, and most important, critical rule of information analysis: no source is above scrutiny because no source is infallible. CNN is a major media outlet. The first reaction of the average person would be to simply trust them over the Gateway Pundit, a relatively unknown source. The CNN article also provides a video which seems to support the claim presented in the headline. The two most notable arguments presented by the Gateway Pundit article are that the CNN video is heavily edited and that the reporter deliberately pushed a vague, unspecific question. The first step the reader must take at this point is to watch, or re-watch, the CNN video. It is clear that the video is edited, but this practice is not unusual. Videos provided in articles and reports are often edited for time purposes, cutting out unnecessary information in order to deliver the important information in a timely manner.

Thus, we arrive at the second critical rule: when in doubt, consult the raw data. This is not always an easy task. In scientific reports, the raw data is often extensive or presented in a format that is difficult for laymen to understand. News articles, on the other hand, often draw their data from raw video or official statements. Given the positions presented by the two articles, at most only one of them can be correct. Therefore, at least one of these articles must be false. The result of this is that a person who believes the false article will likely form an opinion on Donald Trump, then a Presidential candidate. This newly assimilated information might affect a choice of action taken by the reader, such as who they vote for, which could have consequences as significant as deciding the next political leader of the United States of America. Placed in this perspective, it is clear that information and misinformation can be a powerful, dangerous forces. It is imperative that they are properly evaluated by the readers.

Some of the simplest methods for appraising the quality of an information source involve asking basic questions. These include confirming whether or the not source is unbiased, comprehensive, current, and clear.[4] While the latter questions are fairly simple, the question of bias is a tricky beat to handle. Bias is fundamentally difficult to avoid when writing, or choosing not to write, articles or reports. These are written by human beings, who have their own ingrained outlooks and opinions on the world.

Additionally, the existence of bias extends outside the article itself, into the meta realm of publication. There can exist a bias in what information is published and what information is not. A news outlet might choose to only report on the legitimate scandals of a political figure and publish nothing regarding their accomplishments. Even though the published articles may be true, the bias still exists.

A very common misconception is that the authorship of an information source is a good measure of its quality or trustworthiness. While this can serve as a significant, time-saving shortcut, it can also lull the reader into a false sense of security. The most well-respected news outlet can publish erroneous articles, and the most sensational tabloid can publish articles containing nothing but the truth.

A final concept to note, before proceeding to a more orderly listing of methodologies, is the writing itself. The writing styles of information sources can vary widely based on their intended audience and purpose. A scientific report on geological predictions based on survey data will vary in appearance and flow from a news article reporting on a recent crime wave. Despite this, the hallmark of a good article lies with its objective reasoning. There should be a clear logical flow from the raw information being cited to the final conclusions drawn and presented by the author.[5] Faulty logic or subtle fallacies can take factual evidence and output misleading conclusions.

A Simple Checklist for Appraising Sources