4 Difference of Square of Fibonacci Numbers

Fibonacci numbers were discovered by Leonardo Pisano. His nickname is Fibonacci. The Fibonacci Sequence is the series of numbers:

Each number in the sequence is sum of the previous two terms.

Fibonacci numbers first used in 'rabbit problem'. At the beginning, Fibonacci had one male and one female rabbits. He supposed that, every month. Next month more babies (male and female) were born. The next month these babies were grown and the first pair had two more babies (again male and female) . The next month the two adult pairs each have a pair of baby rabbits and the babies from last month mature. Fibonacci asked how many rabbits a single can produce after a year with this breeding process (rabbits never die, every month each adult pair produces a mixed pair of baby rabbits who mature the next month). Fibonacci asked how many would be formed in a year. Following the Fibonacci sequence perfectly the rabbits reproduction was determined 144 rabbits (Sinha,2017). An interesting property of Pascal's Triangle is that its diagonals sum to the Fibonacci sequence, as shown in the picture below: Principle of Mathematical Induction will be used for proof.

Cassini(1625-1712) is the astronomer who found Cassini Identity. Cassini's identity is a mathematical identity for Fibonacci sequence.

The history of science is silent as to why Cassini took such a great interest in Fibonacci numbers. Most likely it was simply a hobby of the Great astronomer. At that time many serious scientist took a great interest in Fibonacci numbers and the golden mean. These mathematical objects were also a hobby of Cassini's contemporary, Kepler(Stahbov,2012).

Let's check that if the identity works for n=1.

Assume that the identity works for some n=k,

We want to show that also

To prove this we will establish

4 Difference of Square of Fibonacci Numbers

Use the following identities.

After simplifying this by using identities

We can show that F

inductive step: Lets assume that it is true for some n ≥ 1.

We need to prove that it is also true for n+1. The Golden Ratio is also found all throughout the physical universe. Weather patterns, Whirlpool have almost the same form like the golden spiral. Even the Sea Wave sometimes shows almost the same spiral pattern. The three rings of Saturn are designed naturally based on the Golden Ratio. The Galaxy, Milky Way, also has the spiral pattern almost like golden spiral. Relative planetary distances of the Solar System also have the golden ratio properties. (2011)

There is a good change of variable analysis in textbook 'An Introduction to the Analysis of Algorithms' (2013).

When we continue, we will see the pattern to continued fractions continues.

The form an = bbn−n1 is certainly suggested:

substituting this equation into the recurrences gives

Dividing both sides by bn−1gives

which implies that bn = Fn+1, the Fibonacci sequence. This argument generalizes to give a way to express general classes of "continues fraction" representations as solutions to recurrences (2013). To draw Golden Spiral, draw squares by using Fibonacci sequence. This works by drawing squares which have the side lengths of Fibonacci numbers and combining them.

Golden spiral is used in real life in many areas like art, beauty, clothing, architecture,logos etc.

The Golden ratio is prevalent in Da Vinci's The Annunciation, Madonna with Child and Saints, The Mona Lisa and St. Jerome. He was famous for using the Golden ratio in his works. The Mona Lisa, a well known portrait of a woman with a coy smile, is embedded with Golden rectangles (2018). 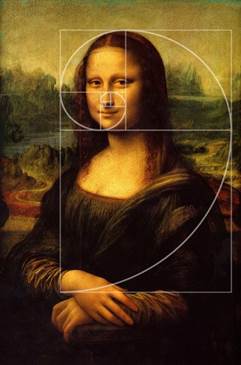 We can find recurrence formula of Fibonacci sequence by using its definition.

We will divide each term by xn−2

We will solve the quadratic equation by using quadratic formula

This will give us the closed form of Fibonacci sequence as:

2. Stakhov, Alexey, 2012, A generalization of the Cassini Formula, The International Clubof the Golden Section