Coffee-mate, a popular retailed non-dairy creamer manufactured and owned by Nestle (A Swiss multinational food and beverage company). Being part of Nestle is one of the reason behind the successful branding of Coffee-mate, Nestle provide value-added advantages that differs Coffee-mate from its peers. Coffee-Mate has developed 29 flavours of creamers, customers can enjoy them in different forms in the wide range of: Powder, Liquid, Sugar-free and reduced fat (Coffee-mate, 2014). These comprehensive varieties of flavours offer Coffee-mate unrivalled product options which satisfy their customers’ expectations. ‘Coffee-mate kind of lifts the flavour. It makes a richer, better-tasting cup of coffee, whether it be an instant or a real one.’ (Coffee-mate article, 2014). The huge customer base could be an opportunity for Coffee-mate to target and capture their market; or a thread if Coffee-mate targeted the market wrongly. This report will be presented according to the market segmentation of Coffee-mate, following by evaluating and analysing the TGI’s consumer survey in terms of target market attractiveness of Coffee-mate.

Market segmentation is a process of dividing the whole market for a product or service into segments with different and unique characteristics (Hartline F, 2011). By referring to Figure 1, Market targeting can be implemented at different stages: Broad (Mass-marketing), Narrow (Micro-marketing) or in between (Concentrated marketing). In this subtitle will evaluate the market targeting strategies and recommend the best strategy according to Coffee-mate current situation.

If Coffee-mate chooses to use mass-marketing, which means it will be ignoring the entire market segments’ characteristics and choose to target the whole market with only one product type (Hartline F, 2011). If so, Coffee-mate will lose the market share generated by their extended product, Coffee-mate Lite (Article, 2014). It is most likely to be impossible for Coffee-mate to develop a product to fit into all the segments because each segments has their own unique characteristics. Also, Coffee-mate might be facing more competitive peers with a more product-focused and tailored marketing strategy (Micro-marketing). Micro-marketing only aims at one segment where the company will try to customize its product to fit the customer perfectly, which can be considered as a thread for Coffee-mate if it is implementing the mass-marketing strategy which aims the market segments broadly. Consequently, Coffee-mate will lose its competitiveness; relatively lose its market dominance.

Differentiated marketing allows Coffee-mate to target few large and potential sub segments with one or more than one product (Hartline F, 2011). Coffee-mate should choose to target multiple segments by implementing differentiated marketing strategy, in order to increase their profitability and its possible for them to gain more market dominance it’s achieved in previous times (55%). In details, Coffee-mate and Coffee-mate Lite should have targeted different segments according to to customers age, income level, social status etc. It was given that the coffee-mate and coffee-mate lite act as a complement goods to coffee, they both are undergoing a change in parallel. Through observation wise, National Food Survey (N/A) suggested that households will keen to spend more on coffee if they are earning high income and old pensioners spent most among the customers (Exhibit 10.3). Additionally, childless households are the most intense coffee drinkers (Exhibit 10.4). Therefore, Coffee-mate should target the high income, old pensioners and childless segment.

In order to perform a more precise and efficient market targeting, Coffee-mate should target its Coffee-mate and Coffee-mate Lite into separate market segment. The National Food Survey (N/A) stated that there is a slightly skew of heavy Coffee-mate buyers towards the characteristics of: lower social class, aged 45+ and 2-3 person households with children.

Whereas, the Coffee-mate Lite users have a slight bias towards 45-64 year-olds, full-time working housewives and households without children. Health concern like fat intake has been raising the awareness of customers. Consequently, some customers might be reluctant to add creamer to coffee. Therefore, Coffee-mate Lite can be segmented for customers who are most likely yo be concerned with their health levels. From all information and observations, it is concluded that Coffee-mate should aim at multiple segment.

TGI’s User Survey covered instant/ground coffee and powdered milk/coffee creamer, market yielded five potential consumer groups for Coffee-mate. As aforementioned, Coffee-mate should choose to aim to serve multiple segments. Hence, this part of the report will aim to evaluate the attractiveness of these 5 potential segments that TGI surveyed. It is also aim to recommend the best segment for Coffee-mate to target. 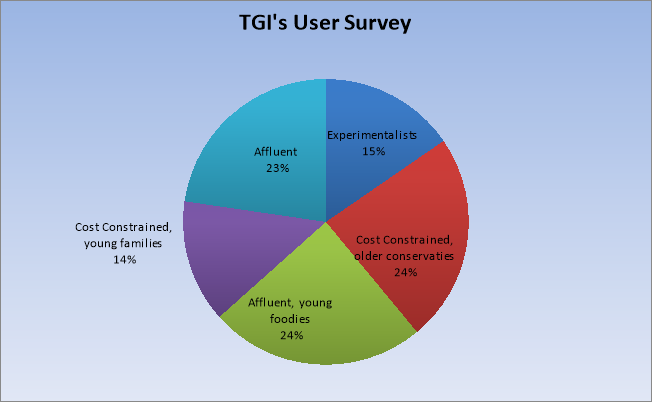 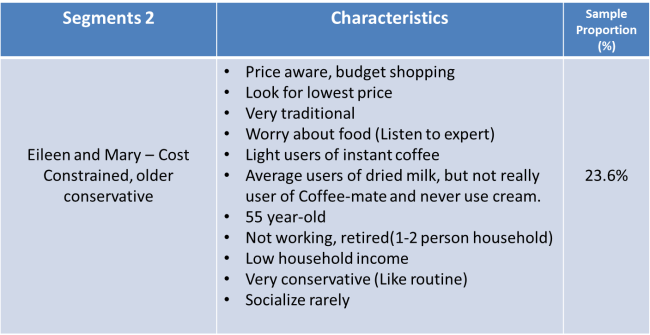 People in the cost constrained, older and conservative group are more sensitive to the variation of the price. When come to purchasing, the demand would be more price elastic, they would ignore the brand and price will be their first concern. In result, they would buy cheaper competitor brands. Furthermore, they are not really a user of Coffee-mate. Consequently, for Coffee-mate, this segment is not worth targeting due to a low brand loyalty and high possibility of substitution effect.

The affluent, young foodies are the people who prefer healthier diet; they are willing and affordable to pay more for that. These people claimed to use Coffee-mate often and also cream consumers. Consequently, the Sarah and Anna group would be the potential customer based for Coffee-mate. In addition, Coffee-mate Lite would be the best product to sell them since it is healthier and lower fat.

‘Dawn and Lisa’ group is severely constrained by their low income. They are not health conscious, indeed they have a mind-set of frozen food is as nutritious as fresh foods. Hence, they tend to buy own-label goods cause of the cheaper price they offer. Cost Constrained, young families never use cream. Thus, Coffee-mate should not set them as a targeted segment because they are improbable to use its product.

The ‘Dorothy and Amy’ group of consumer has been considered as the people that are most likely to buy Coffee-mate’s product. However, advertising of Coffee-mate could be hard to reach them as they have low media awareness and they found ads are not entertaining. If Coffee-mate wants to aim this segment, Coffee-mate Lite would be the best product to serve them. Yet, they are fairly traditional, might tend to use milk or real cream as a complement to their coffee.

Based on the TGI’s User Survey, the ‘Affluent, young foodies’ and ‘Experimentalists’ are the most potential group for Coffee-mate to target and they all fit into Coffee-mate’s strengths. The reasons behind the targeted segment are because they have interesting characteristics:

According to the study, ‘Affluent, young foodies’ shared a sample proportion of 24.4% throughout the survey. They could be the potential customers for Coffee-mate because they are heavy users of instant coffee and cream. Coffee-mate has to use some traditional advertising to reach these customers because they are light users of media, in this sense, Coffee-mate could save some advertising cost in this segment. Affluent, young foodies tend to try new products, this push Coffee-mate a better position. However, the only drawback is they are very health conscious. Chealth (2014) stated that calling a ‘non-dairy’ creamer is not always true and non-dairy creamers makers tend to add extra ingredients to mimic the qualities of milk which will boost consumers’ calorie count. Marketing means persuading, Coffee-mate needs advertise their product in a healthier aspect to give Coffee-mate a healthier image. After all, the ‘Sarah and Anna – Affluent, young foodies’ still the most potential and lucrative segment to target by considering all the characteristics.

Experimentalist shared a 15.4% of sample proportion of the survey. They are considered as the same age group as the ‘Affluent, young foodies’, but they have some unique characteristics of: Materialistic, Fashionable and stylish. Experimentalist has high media awareness; therefore Coffee-mate could advertise their product by using celebrity. In result, it could be more reachable to this segment of customers because they will just buy it because the popular celebrity does. Advertising could take place by using multimedia advertising like Twitter, Facebook, Youtube ads and so on.

This report was formed to evaluate the market segmentation of Coffee-mate with a further analysis and evaluation of the TGI’s User Survey for Coffee-mate. The report draws attention to the consumer behaviour from different groups, and how Coffee-mate should target it and which marketing strategies should Coffee-mate implemented. Furthermore, an evaluation of the TGI’s User Survey was taken into consideration to understand each and every different group of consumers’ behaviour. Last but not least, recommendations of the best segment to target were given to Coffee-mate: This will conclude that Coffee-mate should aim for the Experimentalist and Affluent, young foodies.