It is estimated that by 2018, the share of ad spend in India’s Gross Domestic Product (GDP) will be around 0.45 per cent.

The Indian government has given tremendous support to the advertising and marketing industry. Advertising expenditure is likely to increase in the financial sector, driven by Reserve Bank of India (RBI) policies which could result in a more favourable business environment. Also, proposed licences for new banks and better market sentiments render the advertising and marketing industry in India a fertile space.

India’s Advertising industry is expected to grow at a rate of 16.8 per cent year-on-year to Rs 51,365 crore (US$ 7.61 billion) in 2016, buoyed by positive industry sentiment and a strong GDP growth of 7 per cent and above.

India’s digital advertising market has grown at a fast pace of 33 per cent annually between 2010 and 2015, while spending as a percentageâ€‰of total advertising increased to 13 per cent or nearly US$ 1 billion in 2015.

Print contributes a significant portion to the total advertising revenue, accounting for almost 41.2 per cent, whereas TV contributes 38.2 per cent, and digital contributes 11 per cent of the total revenue. Outdoor, Radio and Cinema make up the balance 10%.

Advertising agencies in the country too have taken a leap. They have come a long way from being small and medium sized industries to becoming well known brands in the business. Mudra,OgilvyandMathew(O&M),McCannEricsonn,Rediffussion,LeoBurnettare some of the top agencies of the country.

Indian economy is on a boom and the market is on a continuous trail of expansion. With the market gaining grounds Indian advertising has every reason to celebrate. Businesses are looking up to advertising as a tool to cash in on lucrative business opportunities. Growth in business has lead to a consecutive boom in the advertising industry as well.

The Indian advertising today handles both national and international projects. This is primarily because of the reason that the industry offers a host of functions to its clients that include everything from start to finish that include client servicing, media planning, media buying, creative conceptualization, pre and post campaign analysis, market research, marketing, branding, and public relation services. 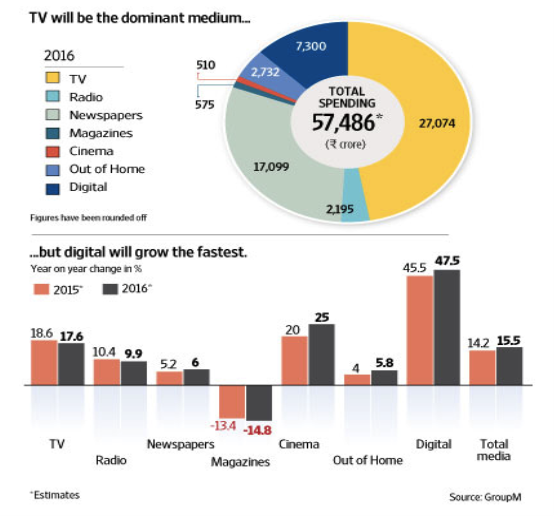 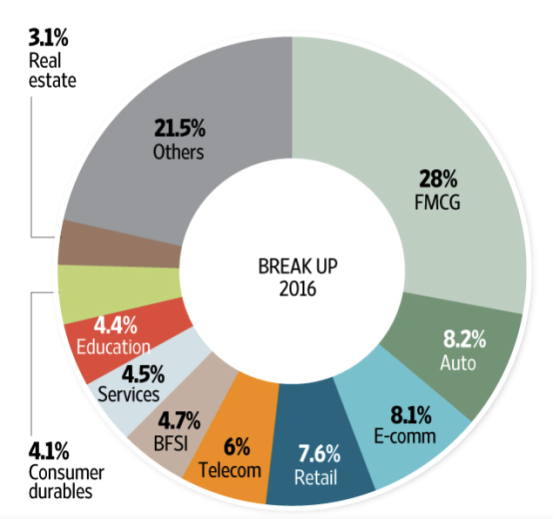 The issue of TV advertising and children has always been quite controversial. In past hundreds of studies have been conducted on this topic. Some of these studies are based on the observation of children in experimental situations. By their use of a non-verbal research method, these studies have the advantage of avoiding misrepresentation caused by some children’s verbal skills whenresponding to verbal tests. The disadvantage of this type of experimental research,however, is that the real-life validity of the results is sometimes quite low.

Similarly, research data based on the actual questioning of children should be treated with caution, since younger children especially misunderstand the questions, lack the verbal techniques to provide an adequate answer, or are simply intimidated by the presence of the researcher.

The marketers and advertisers have shown keen interest on the market segment of children’s product and services; conducted surveys on children television advertising containing trade publications. Involvement of Academicians on the research studies of children research during the period of 1980 was reduced to the amount of publication on the products of children.1 A little publication was done to the children’s television. Investigation had showed that animation which was used to the adult target audience, now using for the children programming especially in the commercials for games, toys, candies, cereals, etc.

A study on the content analysis of television advertising of today children has focused on the change or growth in presentation of advertisements over the period.

The findings concluded in the study were as:

In the study conducted on evaluation of research pertaining to children and advertising by Jeffry Gold Slain in four countries namely Sweden, Belgium, Netherlands and Britain; found little evidence to supporting the position that the children are vulnerable to advertising. He opined that the influence of mass media is more on children than on parents and playmates. The argument is that the commercial advertisement creates wants in children and bring pester power on their parents for the products advertisement. In fact, the parents succumb to their children’s demands assuming to be true despite paucity of support evidence. Jeffry Gold Slain believes that the influence of children has come by the advertisers from so many directions which have no critical examination.

The Task-force of the American Psychological Association had conducted a study on children and observed that children under the age of 8 years are unable to comprehend critically the televised advertising messages and are prone to accept the advertised messages as truthful, accurate and unbiased. This can lead to unhealthy eating food-habits as evidenced by today’s youth obesity epidemic. The Association sums up that advertising targeting children under the age of eight is to be restricted.4 When the cable culture was in rise in India, a study on the impact of television advertising on children in Delhi in 1992 by NamithaUnnikrisnan and ShailajaBajpai has found that: