The National Distribution Centre (NDC) is important because of its geographical location and the role it plays as part of the Royal Mail network. As the biggest processing warehouse, it handles approximately 60% of UK mail and links the whole network together. As can be seen in the below chart, most UK mail go through Regional Distribution Centres such as NDC and play a vital role in linking outward and inward processing (McMurdo,2018).

In order to understand the business environment of NDC, we must look at the overall Royal Mail network as they are dependent on each other. Royal Mail usually differentiates its business into parcels and letters. This is due to the market of those products being uniquely different. The Parcel industry has been growing gradually due to the rise of e-commerce. An annual performance presentation (Royal Mail Plc Presentation, 2018) showed that parcel volume increased by 5% resulting in 4% increase in revenue, illustrating its impact. However, the UK letters market is experiencing a structural decline as more companies are encouraging the shift to online paperless letters. This market trend is important for NDC as it will directly impact its decision making in allocating resources and business performance.

As the universal service provider, Royal Mail continues to dominate the UK delivery market especially the parcel industry where it has approximately half of the market share (Royal Mail Plc Presentation, 2018). Nevertheless, the threat of other competitors still remains, especially Amazon. Jeff Bezos, founder and CEO of Amazon claimed that Royal Mail could not handle half of Amazon’s orders at peak times because, “it did not have the capacity” (Murphy, 2018). From my own observation in Christmas 2016, Royal Mail sent multiple employees to another warehouse in Coventry to deal with the excess volumes that NDC could not handle. Furthermore, Amazons new logistics company which will deliver their parcels directly to consumers is a significant threat for Royal Mail and has already gained a significant Business to Consumer market share (Pooler, 2017).

Nevertheless, the National Distribution Centre has great potential as the overall aim of Royal Mail is to increase its parcels market (Royal Mail Plc, 2018). Furthermore, Royal Mail has found that more than 64% of small and medium size enterprises are looking to expand their businesses to international markets by exporting, which will support its aim of growth in parcels (Royal Mail Plc, 2018). However, external impacts such as Brexit would need to be considered in order to utilise these new opportunities. A parliamentary briefing paper suggested that the impact on Brexit on cross-border deliveries could be significant (Parliament. House of Commons,2018). Therefore, the new opportunities of increased exports could be difficult to achieve in a post-Brexit environment. In addition, if the Brexit agreement does not lead to frictionless trade, this could have significant implications on NDC as it currently struggles with volumes in peak periods. In order to tackle this issue, an improved system of operation will be needed at NDC which will be further discussed below.

HOW THE ORGANIZATION IS STRUCTURED

A formal and good structure is important for organisations such as NDC. This is because structure enables the goals of the organisation to be reached by linking different aspects of the organisation. As shown on the below chart, The National Distribution Centre has a Plant manager who is responsible for the entire mail centre. The Plant Manager is assisted by the Production Control Manager who deals with the financial, resource allocation and long-term planning of the warehouse. The Shift Managers report to the Head of Operation while the Head of Distribution is responsible for Transport Managers. The National Distribution Centre is structured in a way that resembles city locations of the UK. This means that mails going to Newcastle will be taken to the Northern side of the warehouse where a Line Manager is responsible for a team of employees in his area. 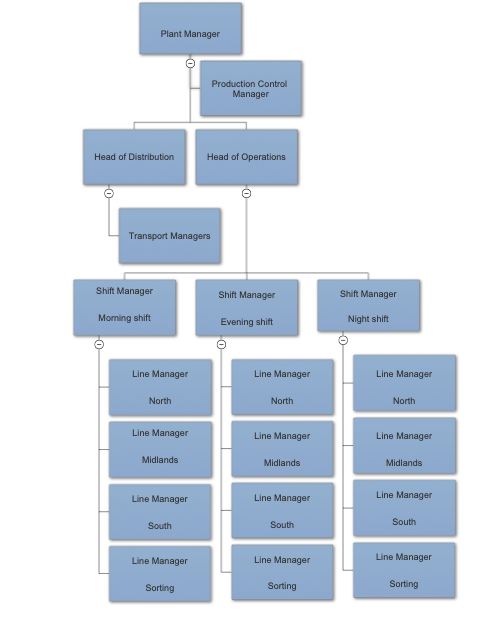 The structure of NDC could partially be defined as the Machine Bureaucracy Mintzberg identified (1979, p.315). A key description of the Machine Bureaucracy is the standardization of work which means that there is a limited input of line managers required. In regard to NDC, this is only true for the sorting section of the warehouse. This is because this section is highly automated with conveyer belts and operators need limited training to be able to sort mail. However, this description is not fully accurate for the cross-docking section of the warehouse. This is where sorted mail and mail that arrive from other cities are brought to be loaded onto trailers. Shift managers will have to co-ordinate with line managers in order to make sure that there is a work flow of human chain formed to take the work from one place to the other. Furthermore, the Production Control Manager could be argued to be the ‘technostructure’ that Mintzberg mentions in his book (1979, p.316). This is because the Production Control Manager acts as the analyst who advices on resource allocation and the most efficient way to operate on the cross-docking section. NDC’s structure could be better defined as a contingency approach mentioned by Mullins (2016, p.413) where despite some standardisation, shift and line managers have a significant influence on how the work is done, allowing for greater flexibility.