with reference to DaimlerChrysler Case Study

Question 1: Analyse various issues inherent in the DaimlerChrysler merger process, whether explicit in the case or dormant, from a cross-cultural comparative perspective. You can use any concept or theoretical perspective covered in the module your analytical lens. ( 1000 words maximum)

The year 1998 was exceptional in the Mergers & Acquisitions framework around the world as it saw mega-deal Daimler and Chrysler. This pact specifically was a whirlwind merger between two firms from very strong backgrounds yet very different organizational cultures that were expected to become integrated to facilitate achievement of the goals & objectives of the merged cross-cultural global enterprise. 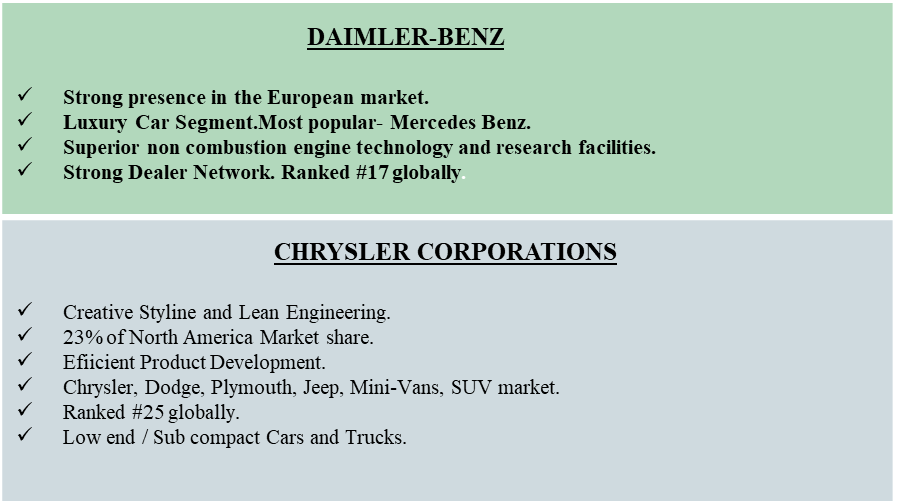 The beginning talks of the merger shot up in January 1998 from an auto-exhibition and the exchange lasted barely 17 minutes between both the CEO’s; driving too fast? This ambitious merger agreement saw the light of the day as early as May 7 and was consummated by November 1998 the same year.

This didn’t allow anyone to raise any objections or time for consultancy since both CEO’s publicly announced the deal day after . Cultural disagreement escalate troubles in cross-cultural Mergers and Acquisitions ( Gill 2012, 434) and thus, Failure to successfully integrate the two cultures gave rise to a crisis that ended the existence of DaimlerChrysler (Darling, Seristo, Gabrielsson, 2005, p. 345)

This article will examine  DaimlerChrysler’s’ merger and Post Merger Integration from a relative cross-cultural point of view pertaining to the judgemental aspects of Hofstede’s and Trompenaar’s cultural hypothesis. The data about the merger with reference to this analysis were taken from Morosini and Rädler .

Having relevance to Hofstede’s pioneer speculation aspects of Germany and The USA on the condition preceding to the merger it might propose that they are alike subjective to most of their scores (figure below). However, the divergence of the “Individualism”, “Indulgence” and “Pragmatism” dimension draw a significant distinction. This dimension poses a score difference of 28,28 and 26 respectively revealing the huge discontinuity between the merging firms. The thought of not being contemplated could have led to hurried behavior and the notion of self-satisfaction among affected German shareholders and employees. 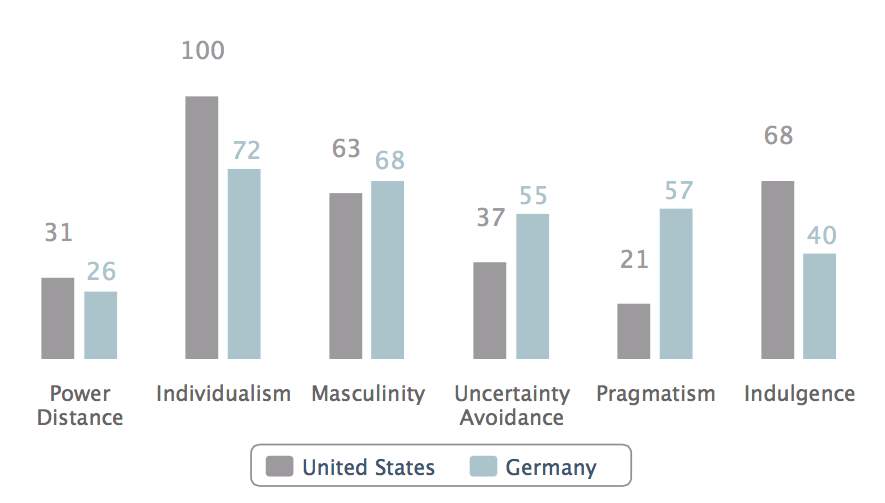 In addition to above-mentioned details, the amalgamation of both companies was timed to be wrapped up within three years. This “rush to structure” (Schneider et al. 2014, 211) materialize to be a stereotypical fault of M&A which doesn’t provide any space to build and create trust and new organizational culture. This is a lethal misconception as having a common culture is also very essential. The Issue Resolution Teams of the resulting merger firm composed of staffs from both the enterprises and a PMI crew of 10 individuals in requisition to brace the IRTs with their substantial workload but couldn’t help much.

Americans were compelled to welcome the split to decentralized management despite being in favor to work in a more centralized environment and vice-versa was the case with the German fellow mates. Apart from, an up to date, the consolidated organizational structure was to be procured. The resulting hybrid organizational structure definitely reflected the clashes in management principles between the unifying companies. As far as their scores of Hofstede’s Individualism dimension are concerned, it might be no wonder that Germans might prefer to retain conservative management practices and plan whereas individualistic Americans might appear to be more creative and innovative thinking. This might not only have led to confusion and difficulties regarding bureaucracy and decision-making processes but also to a divergence of the values and the way of working together.

Daimler and Chrysler, both owed non-identical payment anatomy and the wages of both the firms varied extensively. Chrysler embraced a free-handed pay system, unlike Daimler. Bob Eaton ( CEO of Chrysler) earnings’ was in millions which were comparatively low-key according to the American caliber, apparently set out to be multiple times greater than Daimler’s CEO salary. The theory of Hofstede’s Individualism connects here to spotlight the inclination of individuals to look after their own self.

It seems to be the consensus that trust is the “key driver of effectiveness for cross-cultural teams” (Schneider et al. 2014, 214, also Hajro 2015, 194). However, trust is developed by creation and identification with shared values (Gill 2012, 447) which was not the case in the DaimlerChrysler merger.

Considering, Trompenaars’s Theory of Universalism vs. Particularism – The esteemed administration authority of both the ventures noticed cultural issues and also the decision making actions of the answerable officials varied deeply. Germans manifested themselves with detailed testimonials for the debates in the board meetings proving the theory of universalism, whereas Americans preferred the meetings to just being held on talking terms with the very little discussions relating to particularism.

Enlightening a Dormant issue of Different organizational structure with respect to Trompenaars’s (Neutral vs. Emotional) Both the companies operated in a different cultural environment. Trompenaars’s theory of emotional culture can be reflected in the merger process as Germans followed a very formal communication approach by always addressing each other by using titles and family names showing a conventional approach towards the communication practice whereas Americans followed a direct approach by addressing people by their first name depicting the theory of emotional culture where emotions can be expressed openly and freely. Also, Daimler failed in anticipating that Chrysler followed a more hierarchical structure, consisting of a separate dining room for each grade of executives.

According to ibid, 142 Americans are not inquisitive of forming an extended alliance while doing business. However, Germans prefer in building personal relationships with business partners (ibid, 54). All these differences could have led to feelings of resentment from the American workers, assuming that Germans are arrogant whereas Germans might have believed that their American co-workers are disobedient and narrow-minded.

It is wholly noticeable that many cross-cultural issues of contradictory management thinking resulted in non-performance of DaimlerChrysler merger. Trivial business affairs like enormous money consumed on PMI seminars of cultural sensitivity dint assist in altering management viewpoint, flaws in business implementation remained unbroken which gave birth to the evolution of a negative association between both the organization. The Americans contradicted the technique in which Daimler forced their corporate culture on them. Hence, integration strategy failed imperfectly and cultural disputes made the business proposal objectionable which resulted in the fallout of DaimlerChrysler. 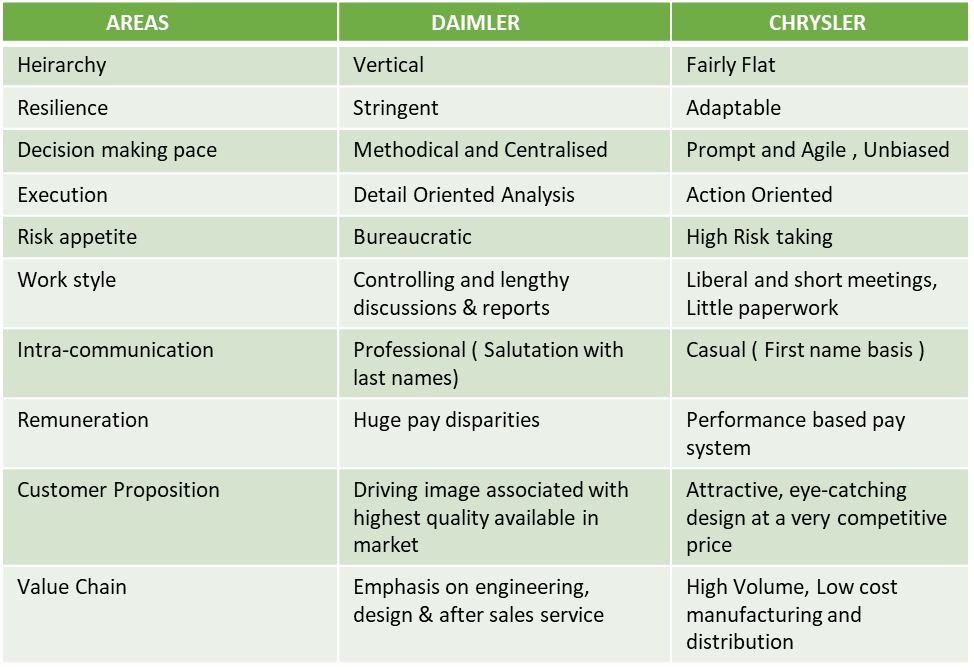 Question 2: Based on your analysis of various issues, recommend three actions which management should take to better manage the merger process . ( 500 words maximum)

foremost, the personal and cultural integration was missing and this ( I believe) leads to a 70% regarding cross-cultural Mergers & Acquisitions. The Daimler leadership could more of an effort to bridge the cultural gap an effort to acrimony. On the other hand, Chrysler employee base been more pragmatic being swamped by in the conglomerate. The impartiality in DaimlerChrysler could have been the foundation for communication where ideas could divide,could have been located and building on contemporary, familiar values could most probably result in increased performance of the staffs. The succeeding ” MBI approach ” (Schneider et al. 2014, 215) how to map, bridge and integrate differences to lay the foundation  common approaches, resulting in high productivity of the employees. 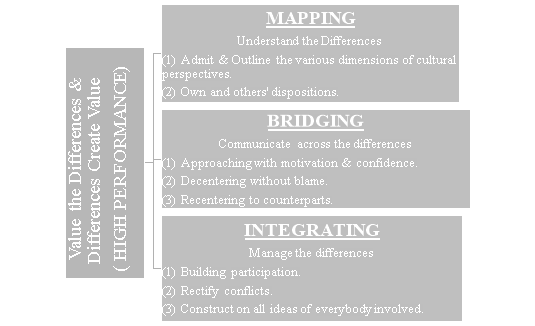 It is evident that “over time, group members come behavior values, and beliefs ” (Schneider et al. 2014, 207). In sequence to execute it might have been a more rational outlook by the peak management to not only focus on the advantages of the merger but to apprehend the thorough extract of the dissimilarities between the merging association. Since “American business failures in foreign operations resulted from a lack of country-specific training” (Gill 2012, 446), this study could have been of massive application to evolve cross-cultural business-making procedures. Moreover, the board of directors and top executives could have implanted country-specific training in Human Recourses Management (HRM) operations. A merger is all about coming together of best talents of the two organizations under a common leadership which aims to have a common vision, shared culture, and best practices.

Lastly, the PMI should have prolonged further than three years which not only could have yielded room for prevailing over the abovementioned cross-cultural issues with respect to decision makings but also would have unlatched the chance for a smooth transformation, putting away the heavy workload burden off the shoulders of the staffs. A deliberate integration phase might have been accommodating by taking time to analyze the culture, communication pattern, workstyle, supervision etc. In addition, even so, DaimlerChrysler attempted to make the merger perform by emphasizing on the governing assembly and team building properties, the regulatory executives should have permitted themselves enough time to also keep its focus on the car manufacturing and on sustaining and upgrading its standard within production. Daimler’s engineering skills and technological advances could be complemented with Chrysler’s skills for innovation, speed in product development and bold marketing style (Johann, 2006, p. 3)

Chrysler’s leadership should not have been so detached and aloof, as this created a sense of doubt and uncertainty in their employee base. The Daimler leadership could have made an effort to dispel the impression that American dynamism faltered under steady German pressure. Following these three recommendations, the entire DaimlerChrysler case would have obtained strength both intrinsically as well as superficially.