The main topic of the study is how bilinguals process sentences in terms of structure and function. The main question in the article was to figure out how Chinese-American bilinguals would compare to monolingual English speakers when they read sentences and diagnose how they process them differently.

This article tested the theory that the structure and function of a sentence is processed in different ways in bilinguals and monolinguals. The main findings in previous studies were more broad and general.

Past research dealt with dual semantic coding, general performance decrements due to limitations in capacity when any two languages share attention or memory space, and excess time to process mental translation(Hatch, 1978; Spolsky & Cooper, 1978).

Unlike the previous studies this paper focuses on cognitive sentence processing instead of only linguistic analysis. This article also uses written Chinese because spoken Chinese can vary from one dialect to another.

The predictions are that English words convey more meaning and structure than Chinese words. The last prediction is that when the two groups are shown the same English words the bilinguals should show a higher ratings.

In this study there were two groups that participated. The first group of subjects spoke Chinese and English and the second group only spoke English. The Chinese and English bilinguals have English as their dominant language because they have gone to English grade schools and high schools. In table 2 of this paper it shows examples of the stimulus sentences that were used in the experiment.

These sentences ranged from nine to nineteen words and also had various syntactic structures such as clauses phrases. The semantic component of the sentences mostly came from newspapers and magazines which were not constrained by specific rules. The task for the subjects is to read sentences and rate attributes of some of the words. They did this by asking the subjects to rate 3 words in each sentence, which was one content and two function words.

The sample sizes for the various lexical categories in the stimuli are also shown in table 3.

The results overall found that bilinguals perceive english words more semantically than the monolinguals. They also found that monolinguals and bilinguals gave greater meaning to the content words than the functions words. The last connection they discovered was that the meaning ratings interacted between language background and lexical category.

For both groups, the function is greater than content words in the rating differences. Interpretations of this data supports the differences in adaption levels for the two groups in the experiment which is suggested by the Comparson Hypothesis.

The article argues that Chinese characters carry less lnguistic information than English words. This means that there will be a lower adaptation level for bilinguals than monolinguals. The topics arrise in these findings are the meaning ratings, structure ratings, with separate part on verbs, and a comparison of meaning and structure.

The findings that bilinguals rated more meaning and structure than monolinguals was because Chinese is a more context-dependent language. Which means that semantic and syntactic attributions that are in individual English words are in comparison carried by sentential context as a whole in Chinese.

All of the differences that were found in this experiment could have significance for other linguistic performances also. An example experiment it could have significance in is when bilinguals read English sentences. The patters for reading time may appear different because of the time spent on function words vs content. Bilinguals would spend less time on individuals and more time at the end of phrases, sentences, and clauses. It would seem that context shows more of an importance in Chinese and there is less word dependent. 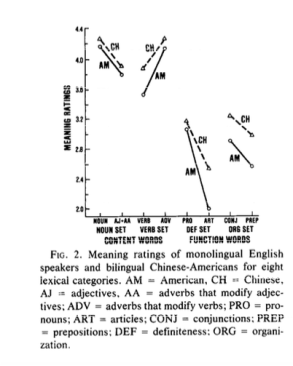 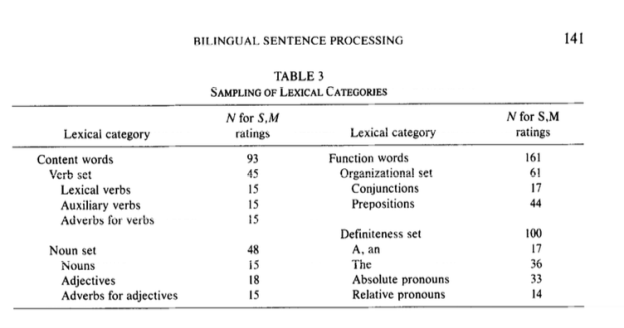 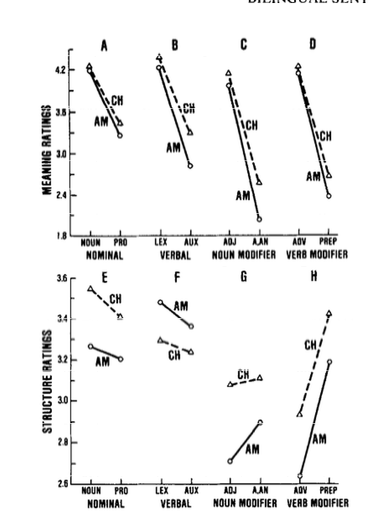