Word processing is essential for people to express and communicate their thoughts and feelings in order to establish social and interpersonal relationships. This report helps measure how words are distinguished from nonwords as well as related words and nonrelated words, in terms of time and accuracy. The additional variable investigated is the gender differences and how it affects the semantic priming. The sample of 139 participants from York University took part in the experiment known as the Lexical Decision Task. The RT and ACC were recorded which concluded that words are faster and more accurately identified than nonwords and related words are quickly recognized as compared to unrelated words. There was no significant correlation found between gender and the RT and ACC of the participants in the task

Language processing is a complex mechanism that is widely researched in the fields of psychology and psycholinguistics. It involves expressing and comprehending one’s thoughts and feelings through words in order to communicate with other people. This report will focus on word processing and semantic priming. Ashcraft (1998) suggested that “any stimulus that is presented first, to see if it influences later information”. Semantic priming occurs when an individual responds to a target word faster when it is preceded by a word related to the target word as compared to an unrelated prime (word). This report also explores how gender differences can affect semantic priming or word processing. The experiment typically used to measure this is called the Lexicon Decision Task which will later be discussed in the Methods of this report. This study is important as it provides more knowledge about the way language is processed.

The main study done by Meyer and Schvaneveldt (1971) reported that the participants responded faster to commonly associated words as compared to unrelated words. The next experiment consisted of showing pairs of words, nonwords or both. In this, the subjects were faster in identifying the pairs of words than nonwords and when both were presented as a pair, the subjects responded to “No” faster when the first string was a nonword.

A study by Wirth et al. (2007) concluded that the initial lexical-semantic access is almost the same in males and females. However, women conduct a deeper semantic analysis which results in women earlier and longer lasting effect resulting in faster processing of related words. Therefore, this study shows that the depth of processing is significant in the semantic analysis.

Another research, involving children’s mental stimulation during sentence and word processing, found that girls had faster reaction times for matching vs mismatching sentence-picture pairs and also a high-imageability vs low imageability words which concludes that girls construct more coherent and vivid mental simulations than boys (Wassenburg, 2015).

This study suggests that women respond faster to early and ate age of acquisition as compared to males however, the results were not significant (Rodriguez, 2015).

In contrast, a study suggests that males showed lesser response time in the signal detection task as compared to females but there were no gender differences found on the other three reaction-time tasks (Bennett, 2011).

After evaluating all the studies, it is hypothesized that individuals respond faster to related words as compared to unrelated words and nonwords. In addition, females have a lesser RT compared to males. This report will help in understanding and observing different variables like word association, recognition of words and nonwords and also the gender differences in word processing.

This experiment used 139 students taking the course Psycholinguistics at York University. The class consisted of both males and females ranging from the age of 19 to 34. There were 102 females, 36 males and 1 other gender who participated belonging to 2 to 5 years of education. Figure 1 shows the visual representation of the genders in the sample.

The experiment used is known as the Lexical Decision Task which measures the responses time of individuals recognising words from nonwords as well as unrelated and related words. This experiment was programmed and administered by PsyToolkit©. It was completed online on personal computers. Student Numbers were required.

First, questions about age, gender, Year of University and Bilingualism were asked. The questions about Bilingualism consisted of two questions, 1. What is your Proficiency in your non-English Language? (0- No Proficiency, 100 Native Speaker) and 2. How often do you use your Non-English language during an average day? (0-No usage, 100-Only this Language). The Lexical Decision Task was 2 minutes long.

After completing the first step, the procedure moved on to the instructions which were displayed on the screen. They are as follows

After pressing the space bar, the task started which displayed words and nonwords. The participants had to follow the instructions as the task proceeded. There were 24 trails consisting of 12 nonwords and 6unrealted words and 6 related words. Arial font, size 40 on a black background was used for the words displayed on the screen. The presentation was random without replacement.

The type of analysis conducted is ANOVA which is short for “analysis of variance”. It is a statistical technique for testing if 3(+) population means are all equal. Post hoc tests and Sphericity Assumed were used to obtain the results of the experiment.

These results can be used to support the study administered by Meyer and Schvaneveldt (1971). People are faster in identifying words particularly in the condition in which they are related and associated. This supports the hypothesis presented in this report about the conditions of the stimuli and words are recognized quicker from nonwords and that the related words form associations make it easier and reducing the speed to process as compared to unrelated words.

The other variable explored in this report is the gender difference. While maintaining the conclusion, there is a significant main effect of word type, the results of the experiment suggest that there is no impact on word processing due to gender differences. There are no gender effects in the analysis of both RT and ACC. This contradicts with the studies provided in the introduction done by Wirth et al. (2007), Wassenburg (2015) and Rodriguez (2015). It does agree with the results of the research conducted Bennett (2011) which show that there were no gender differences in multiple RT tasks. The findings also dismiss the second part of the hypothesis which proposed that females are faster in processing words hence have lower RT than males.

Lexical Decision and priming help with word processing, but limited in sentence priming (Hannah Clzianoski, 2014) which limits the study to only the understanding of how words are processed and not the more complex structure of a sentence. The experiment was limited to only university students taking one course. The experiment would be more helpful if the sample size was bigger and was more diverse including the general population.

Due to the difference in results and conclusions, more research is needed in this area in order to fully apprehend the processing of language. Variables like intelligence level can also be explored in future research, as it would show word processing might be affected by the intellectual ability of an individual. 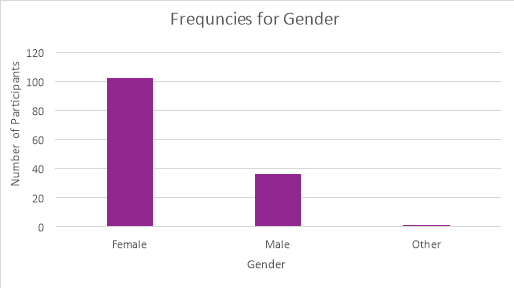 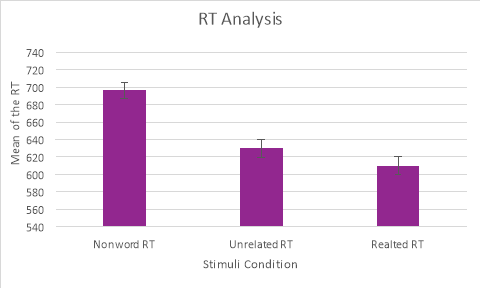 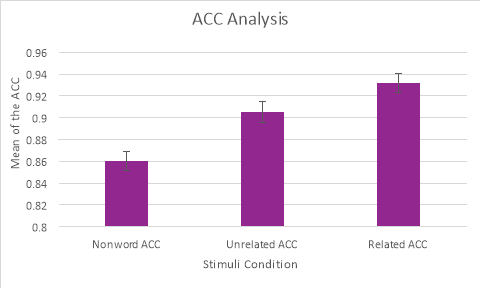 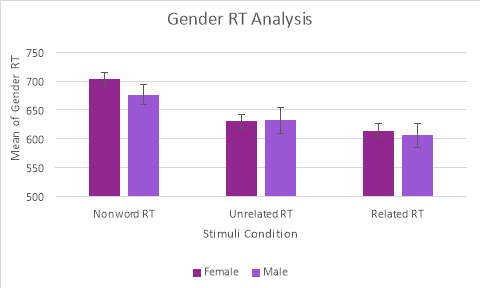 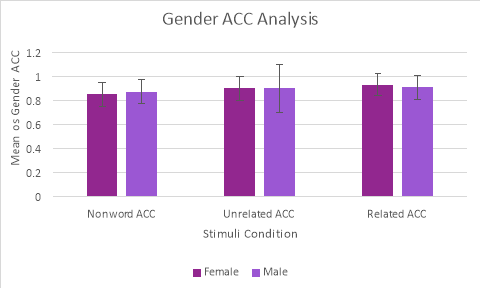