The Dalkon Shield was the most famous Intrauterine Device available in the market between 1970s and 1980s. The 1960s were a time of speedy amendment within the field of birth prevention. The need of the hour was such a contraceptive which would work without the implementation of hormone or hormone-derivative in the device. Following the trend of the required demand Dr. Hugh Davis developed one such IUD which met the requirements of the customers. The Dalkon Shield was originally produced by the Dalkon Corporation which was founded by Davis (DA) alongside his accomplice Lerner (L) and attorney Cohn (KON).[1]

In 1971 A.H Robins Company who were producers of the cough medication Robitussin bought the device from Davis and started extensive promoting effort through the U.S out and Puerto Rico.

The Dalkon Shield was a plastic made device which had a crab-shaped structure with the claim of preventing uterus from expelling the device. Little amount of Copper was introduced in the device which acted as a Spermicide and hence prevented the sperm from fertilizing the egg. A string which was made of fiber was attached to the device at the base and it helped to remove the device [1]. 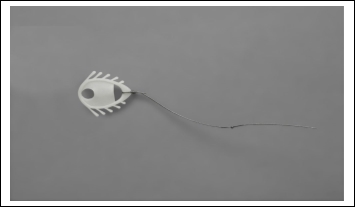 The litigation against Dalkon Shield was that it induced pelvic inflammatory disease (PID) consequently resulting in infertility in women after it was marketed in 1971 by A.H. Robins and Company. The PID was characterized by a severe infection that can lead to damage to the reproductive organs (uterus, fallopian tubules and ovaries) when bacteria enter the uterus through sexual interaction via vagina. Sepsis, infertility or sterility, miscarriage (especially the potentially lethal mid-pregnancy septic abortion), even death within 48 hours of the first flu-like symptoms are the other forms of manifestation of PID.[3]

Dr. Hugh J. Davis began experimenting with intrauterine devices on both his private Johns Hopkins’ family practice patients and in the Planned Parenthood Clinic of the greater Baltimore area. [1] No animal trial was conducted and hence the research result was not fruitful.

Flooded with lawsuits, A.H. Robins sought-after bankruptcy protection from legal proceeding in 1985. The Dalkon Shield Claimants Trust was established in 1989, paying out nearly $3 billion by the time it closed Apr 2000. [3]

According to USFDA the identification of an intrauterine device can be done if it follows the following definition:

The historical significance of the Dalkon Shield was that it changed the quality and manufacturing procedure of making of Intrauterine device. In 1974 all the marketed IUDs (approx. 3.6 million units) were withdrawn from the market due to government pressure. Government regulations were made stringent considering the safety and health concerns of the patients specifically the women. 4% of Dalkon Shield users were injured due to the device related complication and 3% of the women population were pregnant adding to the agony [6].

Any successful study requires a long-time trial on enough participants which will accumulate enough data to support the marketing of any medical device. Dr. Davis although conducted a 12-month study it did not have enough participants, nor the duration of the study was long to be able to determine adverse event rates (in this case pregnancy). So, the IUD was brought to the market with superficial data in hand which was a tremendous threat to the life of the women throughout the country. The average duration of study was from 5-months to 12-months. During this study period a huge number of participating women left the study. They were not even in the worth-noting group of the study which could have provided the data that could have stopped the disaster and life-risk.

As a method of assistance Dr. Davis mentioned to use birth control for the first 3-months post insertion but they did not mention in the report which was a major infringement. Many critical information was not mentioned in the reports as provided by Dr. Davis to remove the hindrance of making enormous monetary profit.

Many of the documents were not presented despite of severe discrepant practice which were followed while conducting the study on the women. The Dalkon Shield claimed themselves as the “Superior contraception” which had only 1% failure rate.

Later it came to light that Davis and his co-workers tested the Dalkon Shield from 1968 to 1969 that was manufactured but never brought to the market. The improved Shield which had thinner Shield membrane to facilitate ease of insertion by folding inti half was never tested before they were brought to the market. Hence the flaws remained unidentified.

In was also found that its multifilament tail string encased in nylon, chosen originally for its strength, served as a wick for vaginal fluid and bacteria to access inside the uterus bypassing antibacterial actions of the cervical mucus and providing the mechanism for the higher infection rate noted. In 1975, the FDA formally cited the Supramid tail string as a hazard[8].

30,000 lawsuits were filed by the victims against the A.H. Robins Company. The Dalkon Shield was an eye-opener to the USFDA. By 1976 the federal law was passed by the US Congress which stated and mandated that safety and efficacy testing of IUD prior to approval.

The Dalkon Shield event was an eye opener to the whole world. The IUD was withdrawal from the market. 7,600 claims comprising of about $245 million USD were settled by the insurance claim firm around the Fall of 1984. At the end of 1985 A.H Robins was declared to be bankrupt while paying for the 4,500 medical bills from the doctors for the removal of the devices. Media campaign was released in the October 1984 advising women who were still wearing the Dalkon Shield to remove them immediately. $615 million USD was paid in total for the settlement of the claims of the patients and the doctors. Shortly after this the Dalkon Shield company was sold to the American Home products in 1989 [9].

It was not until 1984 that Robins’s Company launched an advertising campaign urging women still using the device to have it removed at the company’s expense. By the end of March 1985, 4,437 women had complied and filed claims for removal expenses. That year the A.H. Robins Company filed for Chapter 11 reorganization, which prevented more lawsuits. Overall, nearly 8 percent of American women who had used the Dalkon Shield filed claims against the company [5,9].

The 1976 Medical Device Amendments, classification of device was made mandatory by FDA each with different levels of extensive testing required for the pre-market approval to confirm the safety and efficacy of the medical device which included IUD as well. Additional laws were amended in 1990 and 1992 by the Congress that strengthened post-market surveillance of devices by requiring reporting of serious device-related injuries or deaths not only by manufacturers but by hospitals, health care providers, and patients. Violations could be misdemeanors or felonies with significant criminal implications and fines [10].

The therapeutic disaster caused by Dalkon Shield was an eye-opener. It was a combination of the events of corporate law breakdown, misleading data and falsified documentation submission.The injuries caused to the women initiated the amendment of the acts by the FDA and it is acting as a preventive measure for further disasters. The pain, injury and lives of the suffered victims although irreversible helped millions of women worldwide and helped FDA to come out with the amendments of laws for the betterment of the future and make the medical devices safer to use.