A think tank led by the first Chief Executive in Hong Kong’s history has joined with three major global consultants regarding an ill-structured issue to propose reclaiming ~2,200 hectares of land, predominantly for affordable housing and new commercial opportunities. Now known as the “Lantau Tomorrow Plan” the proposed artificial island would house up to 1.1 million people in a newly created area in the South China Sea just east of Lantau Island, south of Kau Yi Chau, and west of downtown Hong Kong. After suppling the proposed motorways and railways from each surrounding island (all to be integrated under water) the costs of the project presses around HK$700 Billion ($89 billion USD), which does not account for the cost of the roads on the island itself, utilities, the public housing, and various community facilities such as hospitals and schools. As overrunning the budget has now become routine in Hong Kong, the price will effectively be upwards of HK$1 Trillion (128 Billion USD) – Hong Kong’s fiscal reserves stood at HK$1.1 trillion at the end of the 2017/18 fiscal year. Strong opposition groups have stepped in hoping to share information from various positions including the threat of rising sea waters with more severe and frequent storms induced from global warming, obvious budget concerns, and a lengthy timeframe that will result in a sort-term solution of local development on brownfield land.

Hong Kong’s government and Chief Executive say the Lantau Tomorrow Plan will solve the crisis of the city’s lack of ability to provide affordable housing and developable land. The waiting time last year in the city for public housing was over five-years (Hale & Hale 2019) making the argument enticing for many. The project got its initial “Lantau Tomorrow” name when announced by Chief Executive, Carrie Lam Cheng Yuet-ngor, as a cornerstone in a recent policy address, which has put residents of multiple surrounding islands on high alert. Backlash from the public sector has sparked a number of protests where critics of the plan say the project is unnecessary, unaffordable, and unsustainable while conservationists and natives argue the threat of marine habitats, ocean current, and the ecosystem itself would be put in danger. Multiple takes on the plan, especially in deep water areas, are coined “not-scientific nor realistic”. (Ying 2018)

Tranquil lives of Lantau Island also pushback on this project due to the unwanted aim at connecting the city closely to mainland China and its eventual task of being a gateway to the Greater Bay area, a campaign to integrate Hong Kong with southern Chinese Cities (Ying 2018). Lantau Tomorrow received heavy questioning after getting accused of being a gift to private business to enable them to make huge profits, as a similar proposal was made by a group consisting of governors and supporters whom represent some of the world’s major developers and powerful insiders: New World, Henderson Development co., Hang Lung, and many more – creating speculation that the developers, powerful business owners, and the city are really just in it for the eventual payout and are overlooking a large portion of those impacted and the current-day fiscal concerns. Those involved ultimately come from pollution experts, environmentalist, native residents, major world developers, private influencers, and the top-down Chinese government whom all have to collaboratively work towards a consensus for possible long-lasting change.

Mui Wo, the nearest civilization to the reclamation project, is a sleepy town of 5,000 people on Lantau Island. It draws visitors to its many cafés and restaurants, a beach, and scenic hiking trails that wrap around the coastline with views of nearby islands. “Although Lantau is Hong Kong’s largest island, Mui Wo has a distinctively offbeat vibe compared to the rest of the city, with neighborhood dogs relaxing on the sidewalk and the pervasive calm typical of coastal tourist towns. It’s a community that could almost be in semi-rural Hawaii, dotted with abandoned farms and tropical vegetation as well as overgrown Chinese graves and low-rise apartment buildings.” (Hale & Hale 2019). The residents of Mui Wo should expect a drastic change to their native atmosphere, the cafés that once provided sweeping views of the sea will soon have unprecedented views of construction – and eventually high-rise towners. While this is broadly considered a NIMBY issue, multiple values are also being acted upon in connection to the project’s idea. With a joining of residents and activists on nearby islands being concerned that this solution to housing places too high of a toll on local and marine environment around the towns Mui Wo and Kau Yi Chau (Kuo, 2018). The project will create a narrowing of the passageway to the open sea and will create an almost enclosed environment, where water-current movement will be greatly reduced, oxygen contents of the water slowly depleted, and, unfortunately, a perfect place for garbage and debris to pile up year-round creating a nightmare for the native lives on the island of Lantau.

Proponents of the project say it is aimed squarely at one of Hong Kong’s biggest issues: a lack of affordable homes. Hong Kong, home to 7 million people, has some of the world’s most expensive housing. Lantau Tomorrow has promised 70% of the new residential land developed would be devoted to public housing (Zoning: 1/3 residential, 2/3 commercial, public facilities, and new industries). Pro-democracy lawmakers and environmentalist argue that Hong Kong doesn’t need a mega-project taking over twenty years to complete, but rather needing more urgent solutions like provisional hosing on brownfield land in the New Territories as local government estimates the city to peak in population by the year 2043 at 9 million people. Tung Chee-hwa, the initial think tank founder, knows the importance of short-term solutions as well insisting on the potential of privately-owned farmland in the New Territories of China and noting it would be necessary to develop damaged agricultural land, locally referred as a brownfield site.

Many skeptics believe that the estimates on the number of housing needed to sustain the areas growth is blown out of proportion just to achieve the necessary status to construct such a project. Insiders on Hong Kong’s growth say the city needs to prepare for a population rise from 7.3 million to 9 million residents by the year 2043. Interestingly noted by Lam Chiu Ying, writer for the South China Morning Post, “Where will these 9 million come from? Young couples today are not having as many babies as before. In fact, the latest official projection by the Census and Statistics Department is that the population will peak at 8.22 million in 2043, which is some 800,000 fewer than the 9 million cited in the 2030 Plus blueprint” (SCMP, 2018). As the proposed 1,000-hectare Lantau Tomorrow Plan is expected to house a comfortable 700,000 people, many against the build point to the spare capacity for housing on-land rather than created land… in their argument – what more than a 2,200-hectare project?

Opponents have argued that Hong Kong needs a land reserve, but continuing the idea of such a massive reclamation project does not stand up to scrutiny since the population is consensually agreed upon to decline after the year 2043 and such long-lasting environmental affects, depleted fiscal reserves, and drastically shifted native lives has resulted in conflict; these opponents look for on-land building that will be looked at as more than an insider development to create potentially massive profits with the ability to house the same needed number of people at a much lower cost for the user and the creator. Alternative land supply solutions, like the hundreds of hectares of brownfield sites in the New Territories, were not progressed further, simply because the government would not risk offending the vested interests that prop them up.

The fact that the project will create Hong Kong’s third central business district (CBD) also means it will be a considerable source of revenue for the government, apart from easing the pressure on the existing two CBDs (in terms of demand for office space), while allowing homes to thousands of new residents as well. A public-private partnership is a leading option, out of many, being considered to raise adequate wealth for the expensive project. A US$64.1 million funding request is soon to be sent to the legislature to take feasibility studies further on phase one of the project (phase one completion: 2032; total completion & open to residents: 2043). Residents and activists fear that induced climate change will bring more unpredictability to the area and would not bode well for such a flood-prone investment in respect to the affordable housing. Many politicians and groups working on the future project are overlooking the small mindset of the native residents on the island. The main Lantau Island originally started to gain traction as a habitual piece of land in the early 1990’s where many were seeking clean air, a tight-knit community, and the affordable housing landscape still present to this day.

Against the powerful insiders and the government, itself, the giant reclamation project has groups like White Elephant City, Tycoon Island, and Insanity Reef continuingly pressing rhetoric at organized protests in opposition to the Lantau Tomorrow plan. Demonstrating has become a risky business in Hong Kong, so more than 5,000 people don’t give up their precious Sunday unless they feel passionately about an issue. The East Lantau reclamation policy has certainly ignited genuine widespread public fury and indignation. These days, non-compliance in Hong Kong can mean imprisonment, loss of career, public humiliation and restricted travel opportunities (              Kuo, 2018) – intensifying the governments control on the issue.

Through the Communist Party’s control, The Peoples Republic of China is broken into legislative, executive, judicial, and military compromising branches. Including the Urban Planning departments, the government is characterized by a top down approach where the governing heads have almost all say in the decision-making process. In connection with New World, Henderson Development co., Hang Lung, etc., and the Chief Executive herself, the Chinese government has really no pushback besides the relatively small activists’ groups and scholars whom have resulted to protests. Included parties surley involve the residents on several outlying islands, including Lantau, but in a heavily top-down government small voices are almost always overlooked especially in such an ill-structured manner. The ones whom have say in this instance are only hindered by the amount of wealth able to be allocated to the project. 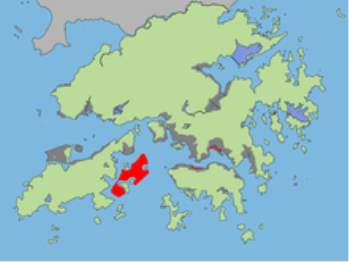