Dubbed one of the poorest countries in Southeast Asia, the Republic of the Union of Myanmar is an interesting case study for analyzing the extent of structural transformation in the region. Having being setback by decades of military rule and civil unrest, Myanmar’s path to economic development has been a challenging one. Before and during the occupation of the British in the late 19th and early 20th century, Myanmar’s economic prospect was promising (Hays, 2008). During this period, Myanmar would become the world’s largest exporter of rice and the 2nd wealthiest country in Southeast Asia (Hays, 2008). However, independence and protracted spells of military rule demoted the country to its current status as the least developed country in Southeast Asia.


Figure 1: A map of Myanmar and its boundary countries Myanmar’s inward-looking approach to economic development following independence did little to spur economic growth as many had wished. This period coincided with the christening of the so-called Burmese Way to Socialism, which entailed pervasive nationalization of enterprises and the establishment of barriers to foreign direct investment. Additionally, the military government also nationalized agricultural lands, thereby controlling all aspects of rice production, which was chiefly handled by foreign businesses (Thein, 2004). Import-substitution industries became the focus of the government, and agriculture suffered as a result. Despite the abysmal track record of the import-substitution industries in Myanmar, it was not until the late 20th century that the government started to allow for some form of capitalism (Hays, 2008). The economy immediately reaped the benefits of this economic reform, and agriculture registered some strong growth during this period (Thein, 2004).

Given that recent policy commitments suggest that the government of Myanmar is dedicated to promoting sustainable agriculture, this research focuses on the extent to which structural transformation has occurred in the country.

According to (Barrett, Carter, & Timmer, 2010), structural transformation, which is both a cause and an effect of economic growth, is usually defined by four interrelated processes. These processes include a drop in the share of agriculture in GDP and employment, rural-to-urban migration, growth of the modern industrial and service sectors, and a general improvement in health outcomes (Barrett, Carter, & Timmer, 2010). The structural transformation of any economy is usually identifiably characterized by a decline in the relative importance of agriculture to output and employment. For countries such as Myanmar, who have historically and heavily depended on agriculture, it is useful to learn about how different structural transformation will manifest in these economies. Moreover, with the suitable agrarian conditions present in Myanmar, is structural transformation a necessary evil as the country charts its path toward sustainable economic growth? Or, can agriculture’s role be reinvented to facilitate the net transfer of resources from agriculture for the development of the other sectors of the economy?

(Johnston & Mellor, 1961) daftly pointed out that the rate of structural transformation will be different for different economies. They expect that structural transformation will proceed slower for countries that have a comparative advantage in agricultural production. The transition from being the major exporter of an agricultural commodity to employing less than 10 percent of the labor force in agriculture does not happen overnight. Myanmar falls into the category of such economies with a comparative advantage in the production and exportation of agricultural products such as rice. Hence, we should not expect a rapid decline in the proportion of the labor force that is employed by the agricultural sector. However, (Johnston & Mellor, 1961) subsequently counter this point by highlighting that even such countries might experience a drastic reduction in the relative importance of agriculture if there is a considerable increase in income per capita.

Although Myanmar is often referred to as an agricultural economy, there is no doubt that its economy has experienced some transformation over the past decades (FAO, 2019). Figure 2 reveals that the share of GDP attributable to the agricultural sector has been declining between 2005 and 2017. Over this period, the other sectors, especially industry, have also experienced modest increases in their share of output. According to figure 2, agriculture accounted for more than half of the share of GDP in the early 21st century. This percentage has decreased to just over 25 percent in recent times. Notably, the service sector contributes the most to output, currently accounting for more than 40% of the country’s GDP. Figure 2 also depicts that the extent of structural transformation was more drastic between 2005-2006 and 2010-2011. Currently, the decline in agriculture’s share of GDP has proceeded at a much slower rate. Despite the decline in the overall contribution of agriculture to Myanmar’s GDP, one will be remiss to discount how vital the sector is to the economic development of the country. A fall in the relative importance of agriculture should not equate to a stunted agricultural sector. As depicted by figure 3, notwithstanding a sharp dip in food production experienced in 2012, agricultural (food) production has generally increased since the start of the 21st century. This growth in food production in absolute terms might be as a result of an improvement in agricultural productivity. With this increase in agricultural productivity, the economy can transfer capital, labor, and other resources from agriculture to the non-agricultural sectors of the economy to facilitate a more balanced economic growth. 
The decrease in the relative importance of agriculture is not limited to just its share of output. Another important characteristic of structural transformation is the decline in agriculture’s share of the employed. To instigate economic growth, Arthur Lewis advocated for the absorption of labor surplus in the traditional sector (agriculture) by the modern sector. His model limits the role of agriculture to an excess labor supplier until surplus labor is exhausted. For an economy like Myanmar, whose agricultural sector has historically hired a considerable number of people, there is a risk that the marginal productivity of labor might be negligible or perhaps negative in certain parts of the sector. Hence, for such an economy, the reallocation of labor to the modern sector becomes imperative. 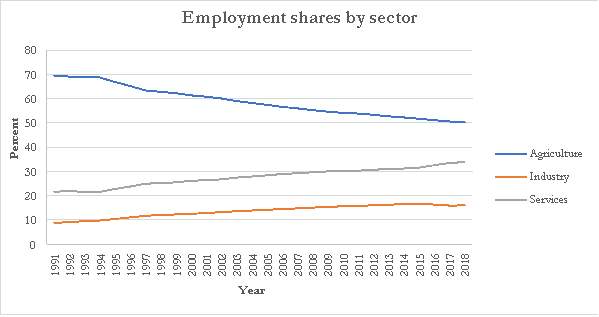 Contrary to the government’s vow to promote sustainable agriculture, agriculture lags planning and finance, education, and defense in terms of budget allocation to these sectors. According to figure 5, Myanmar expends the largest share of its annual budget on national security. This discovery comes as no surprise as the country’s socio-political climate continues to remain tense amid civil and ethnic upheavals. Across the five years represented in figure 5, expenditure on defense is currently at its lowest, and yet it still commands more than 10 percent of the entire budget expenditure. Apart from the years 2016 and 2017, the education and planning sectors have accounted for similar proportions of the national budget. Figure 5 also highlights that a parallel pattern emerges across the top three priority areas as the budgetary allocation to these sectors increases from 2015 then peaks in 2017.


Figure 5: Budget allocation for agriculture and other priority sectors 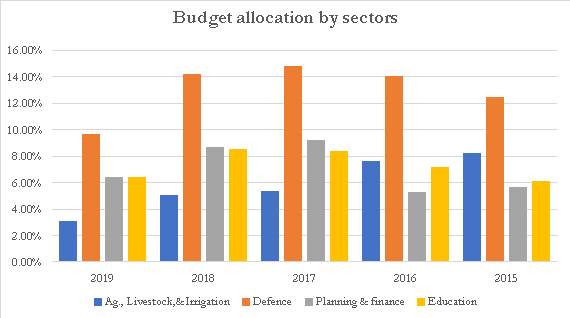 More importantly, figure 5 highlights a worrying trend with regards to the percentage of the national budget allocated to agriculture, livestock, and irrigation. Evidence from the figure shows that the agricultural sector was the next most backed sector following defense before 2017. In 2015, the agricultural sector attracted a staggering 8.2 percent of the national budget. Comparatively, the education and planning sectors were allocated 6.1 and 5.6 percent, respectively.  However, the agricultural sector has fallen behind recently, contradicting the government’s public vow to promote sustainable agriculture in the economy. The government’s apparent neglect of agriculture, as depicted by figure 5, might have contributed to the moderate growth of the sector Myanmar has experienced over the past decade. According to (WorldBank, 2017), Myanmar’s agricultural sector registered a modest growth of just 2.5 percent over the period 2009/2010 – 2016/2017. It must be noted that this growth rate lags that of China and Thailand at this same stage of the development of these two countries (WorldBank, 2017).

Apart from agriculture’s share of the national budget, the composition of public expenditure within the sector is also relevant to understanding the role of spending on agricultural transformation. Between 2009/2010 and 2016/2017, the largest proportion of the Ministry of Agriculture, Livestock, and Irrigation’s (MOALI) budget went towards irrigation infrastructure (WorldBank, 2017). More than half of the MOALI budget was allocated towards investment in irrigation systems (WorldBank, 2017). A further 15 percent of the MOALI budget went towards agricultural mechanization, with agricultural finance and crop programs also averaging the same percentage over this period (WorldBank, 2017). The disproportionately larger allocation of the MOALI budget towards irrigation partly reveals the relative importance of rice production to Myanmar’s agriculture since rice production is heavily reliant on the ready availability of water (Monaco & Sali, 2018). Moreover, the improvement in the priority of agricultural mechanization to the sector discloses the increasing need for machinery to improve agricultural productivity. The improvement in agricultural productivity will facilitate the structural transformation process by accelerating labor reallocation to other sectors until productivity is equalized across all sectors of the economy.

Later development theories or models such as was introduced by Ranis and Fei call for a more balanced growth approach to economic development. According to (Ranis & Fei, 1964), the agricultural sector should not be neglected as its role transcends the provision of surplus labor. They argue that the sector’s contribution to the availability of food surplus to facilitate the transfer of labor to the modern sector is equally crucial. Hence, the noticeable decline in the proportion of the budget allocation towards agriculture, as portrayed in section 3, should be a source of concern for Myanmar’s economy. (Ranis & Fei, 1964) will suggest that the interdependence between the agricultural and industrial sectors calls for synchronized investments in both sectors to maintain a more balanced growth.

The relative importance of the agricultural sector to employment and GDP has been declining in Myanmar. However, most Burmese are still employed by the agricultural sector. Moreover, contrary to the government’s commitment to promoting sustainable agricultural development, the sector’s share of the national budgetary allocation continues to dwindle in recent years. Models of economic growth such as Ranis and Fei’s will recommended that the government of Myanmar refocus a bit more of public spending towards investments in agricultural infrastructure, as well as research and development to boost productivity growth in the sector.