Energy availability and economic progress go hand in hand. It is not possible to achieve economic progress in the absence of cheap, reliable energy availability. The use of energy on the part of society has increased systematically over the past two centuries, since the time of the industrial revolution. And there is no end in sight to the increase in the consumption of energy. This will continue because as global population continues to increase and especially in some of the emerging countries like China and India, the consumption of energy is bound to increase exponentially.

In the past fifty years, global energy consumption has increased monotonously and how is this demand satisfied? This demand is being meet primarily with crude oil. Crude oil has been the largest energy component since 1960 and grew very rapidly in the 1970s and ever since, has grown less rapidly. Though oil has been losing ground but nevertheless, it remains the most important source of energy, second being coal, according to the Energy Information Administration (EIA). Oil is a fossil fuel and the world is about 80 to 85% dependent on fossil fuels for our energy supply. This is a challenge because when fossil fuels are burnt, they emit CO2 in the atmosphere and since CO2 is a greenhouse gas, it contributes to global warming 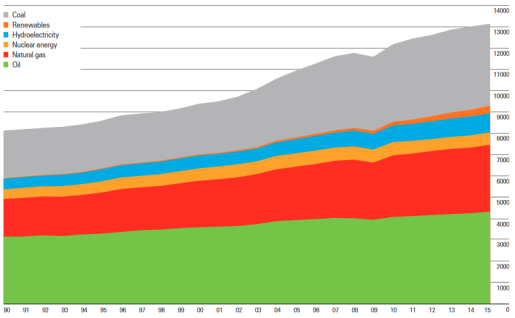 Oil is a mix of hydrocarbons that are liquid under atmospheric conditions. The fact that they are liquid allows for easier processing, transportation, storage, and has a higher content of energy per volume. These are the greatest advantages that oil has over other energy resources.Â  However, there are scenarios where the oil is not trapped in a cap rocks and forces it way out to the surface, or very close to the surface of the ground, at which point, the lighter molecules evaporate into the atmosphere and what is left are heavier molecules, which are normally called extra heavy oil or bitumen. This is known as Oil sands or Tar sand and it is made up of a mixture of sand, water, clay, and bitumen[1]. Oil sands or Tar sand are found in various countries throughout the world, but the vast quantities of oil sand reserves are found in Canada and Venezuela, according to EIA. Alberta, Canada, is estimated to have about 1.7 to 2.5 trillion barrels of oil sand reserve, thus, representing the largest single reserve of oil in the world.[2] Accordingly, Canada produced about 3.8 million barrel per day of crude oil, in 2014 alone. Of this, 2.2 million barrel per day was produced from the oil sands.[3] About 10% of the world’s oil reserves are located in the Alberta oil sands and about 96 percent of Canada’s total oil reserves are contained in the oil sands.[4] Moreover, Canada is said to be the leading supplier of crude oil and refined oil products to the United States and the trend continues to grow in terms of percentage of US oil imports. About 60 percent of Canada’s production capacity from oil sand, about 1.34 million barrels per day is exported to the US.[5]

Energy as found in nature needs to mined, processed, refined and transported before it is available for end use. Unlike oil produced by conventional oil drilling which is generally less dense than water, extracting oil from oil sands is more complex. There are two methods for getting bitumen out of the ground and turning it into usable products – “in-situ” and “open pit mining”. The extraction method used will depend on how deep the oil sand deposits are below the surface. Both methods are complex, energy-intensive and expensive processes.

In-situ extraction process is used to mine bitumen that lies deep below the surface of the ground (greater than 75 meters underground). According to studies, about 80% of oil sands reserves in Canada are accessible via in-situ techniques.[6] The in-situ method normally uses a process called Steam Assisted Gravity Drainage (SAGD). This method requires the drilling of two horizontal wells; one is used for injecting steam into the oil sand deposit to heat the oil sand making the bitumen to become more fluid and easy to flow more easily. The second well is used to pump out the flowing bitumen to the surface.[7]

Like the conventional oil mining Open-pit mining is used when mining oil sand reserves that are closer to the surface of the ground (less than 75 meters below the ground). According to industry report, 20% of oil sand reserves in Canada are extracted using this mining technique.[8] With this method, trees and top layer of soil are cleared, large shovels are used to scoop the oil sand, which is mix of sand, water and bitumen into large trucks and then moved it to onsite processing facility, where hot water is added to this mixture of sand, clay, bitumen, in a large separation vessel. Bitumen froth is forced to rise to the surface, during the separation process and then removed and diluted with chemicals.[9] Normally, the spent sand and other materials that are recovered during this process is then returned to the mines to fill in empty space that has been mined as a way of reclamation

Once the Bitumen is recovered from either through open-pit or from in-situ operation, the viscous substance is then processed in order to make it easier to transport through pipelines to various refinery, where it is to be used as feedstock. This process is called upgrade. The purpose of upgrading is to transform bitumen into synthetic crude oil, a high quality, light sweet crude oil, by removing carbon and adding hydrogen and chemical to bitumen.[10] Typically the upgrading process comes in two phases namely primary and secondary upgrading. The primary upgrading involves breaking down the heavy molecules of bitumen into lighter and less viscous molecules. The secondary upgrading is used to further cleanse and purify the bitumen attained from primary phase. This phase involves removing other impurities such as nitrogen, Sulphur, and trace metals and get it ready for oil refineries.[11]

The mining and processing of oil sands present a variety of environmental impacts, such as global warming and greenhouse gas emissions, disturbance of land structure, and air and water quality. It also may have significant social and economic impactson local communities. Another major concern is related to the tremendous amount of water required for oil sands development -extraction, upgrading and refining. It is estimated that the process requires an average of three barrels of water for one barrel of oil produced,[13] though some of the water are be recycled. The major environmental challenges to oil sand extraction among others are land, water, air:

Development of oil sand crate concern about the accumulation of large amounts of residual waste known as tailings. Tailing, which contain a mix of water, clay, un-recovered bitumen, and dissolved chemicals, including some organic compounds are considered to be extremely toxic and very hazardous to the environment. Moreover, the tailings are stored in large ponds and causes seepage into the surrounding landscape, though the water released from the ponds can be recycled and reused, however, most still remains as mud almost indefinitely. The massive activities associated with oil sand project are also known to create tremendous structural disturbances of the landscape including seismic exploration and construction of wells, roads pipelines etc. negatively impact the environment and endangers the wildlife.

Since oil sand is made up of a mixture of sand, water, clay and bitumen, a hot water process is required to separates the bitumen from the associated sand, water, clay and minerals. The process takes enormous amount of water of fresh water to produce a barrel of bitumen from mined oil sands. In many cases, the water is sourced from ground water aquifers. Rapid expansion of oil sands projects are causing great strains on fresh water resources, which leads to ecological and environmental problems.[14] Also, since bitumen is denser than water, it can be harder to clean up when there is a spill. Additionally, oil sands mining operations produce huge amounts of toxic waste, known as “tailings”, which consist of water, sand, silt, clay, hydrocarbons and contaminants.Â  The contaminates may contain various levels of naphthenic acids, polycyclic aromatic hydrocarbons, phenolic compounds, ammonia and mercury etc., some of which, according to International Agency for Research on Cancer and the U.S. Environmental Protection Agency, are known to be cancer-causing agent.[15] Even worst, the tailings are mostly stored in ponds or man-made dams, thus causing the tailing to leak into ground water and surrounding water resources. It is estimated that about four billion liters of tailings leak each year, thereby triggering immense environment devastation.[16]

Extracting Oil sands require a substantial amount of energy in processing to process, upgrading and refining bitumen to the final products suitable for market. The entire development process is so energy intensive that it contributes immensely in carbon emissions. Reports suggest that the oil sand industry is among the highest contributors of national air emissions in Canada.

Oil is produced to be consumed, more than half of the oil consumed in the world is for transportation – fueling society’s unquenchable demand for mobility. More than 50 percent of oil produced is used for transportation needs.[17]. As the world’s population grows, so will the global passenger mobility, global freight and transportation volumes. Additionally, the current global rise in urbanization, the global economic growth, as well as high level of economic development are other important factors prompting the increase in demand for oil. As fossil fuel, final oil products are burnt for energy through the various applications for which they are used. When burnt, they emit high amounts of harmful emissions, including nitrogen oxides, sulfur dioxide, and particles that drift into the atmosphere and contribute to air pollution. Carbon dioxide and water vapor, along with other gases such as ozone and nitrous oxide, are known greenhouse gases and the increasing amounts of these greenhouse gases in the atmosphere are linked to global warming and could have disastrous environmental consequences.[18] However, since the business of producing oil from oil sand is base generally on oil price, chances are that there will be some slowdown in sand oil operations around the world, as oil prices decline. Due to the recent downward trend of oil prices, the economic viability and financial attractiveness of oil sands projects have also declined. Financial analysts including those from Goldman Sachs and Total have concluded that “oil sands projects require long-term prices in excess of $80/barrel to break even”[19]. Deutsche Bank and BP, among others, have raised doubts about the future of investing in oil sand and Shell Oil has significantly scaled back its oil sands plans[20]. If these phenomena should continue, it might be the preeminent way in reducing and mitigating the environmental degradation being caused by oil sand.