Netflix, Inc. is an American media service provider. Based out of Scotts Valley, California, Netflix was established in 1997 by Reed Hastings and Marc Randolph. The idea for a mail order movie service came from the founder being fine $40 at Blockbuster video for returning a movie late. Originally only offering movie and game rentals delivered to your home. Netflix has since expanded to offer various streaming content internationally. Netflix is continuing to be a leader in the industry by provided ground-breaking original movies and series.

According to Inc.com, Netflix is currently the number 1 streaming service, just ahead of Hulu based on revenues, subscribers and countries offered (Jackson, 2018). So how will Netflix ensure that they remain the leader in this industry. Netflix is currently exploring the idea of expanding into a new studio and production space in New Mexico. This expansion would be partially financially supported by the state and the city of Albuquerque. To qualify for the state and city investment, Netflix will need to spend at least $600 million in production within the first 5 years of operations and an additional $400 million in direct or indirect spending (Knight, 2018).

Over the years, Netflix has continued its steady growth in revenues, employees and library. According to Market Watch, Netflix revenues in 2017 were $11.69 billion with a resulting gross income of $4.08 billion. There has been an increase in the revenues and gross income over the last four years. Netflix is currently offered in more countries than any other streaming service (Market Watch, 2018). As a private company, Hulu is not required to release revenue information. According to Netflix’s K-10 Annual Report, there were approximately 5,500 employees, of which 5,400 were classified as full-time and 600 were classified as temporary. There has been a consistent increase in the number of employees over the last four years (Netflix, Inc., 2018). These increases in employees have been necessary to the continued expansion of the company and in the production of original content. 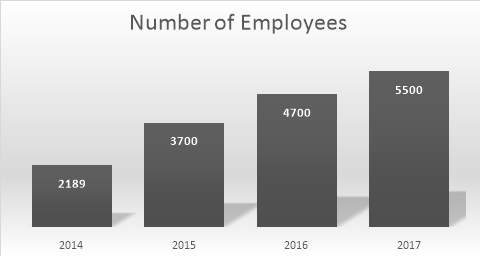 As of October 2018, Netflix as a larger content library than their closest competitor, Hulu. Netflix currently has approximately 5096 title in their content library with 3867 of those titles coming from movie content. Both Netflix and Hulu have similar T.V content so it is the difference in movie content which ensure Netflix has the larger library. By ensuring Netflix can increase their original content, they will continue to expand their library with exclusive content.

Netflix’s mission statement reads as follows “Our core strategy is to grow our streaming subscription business domestically and internationally. We are continuously improving the customer experience, with focus on expanding our content,               enhancing our user interface and extending our streaming service to even more internet-connected devices, while staying within the parameters of our consolidated net income and operating segment contribution profit targets” (Netflix, Inc., 2018). Deciding to expand their studio and production space has been crucial to Netflix historical success. With subscribers demanding more and more original content Netflix will need additional space to meet those demands.

New Mexico has seen success as a popular filming and production site with various movies and T.V. series. The extremely popular T.V. series “Breaking Bad” and “Better Call Saul” are just a few of the series filmed in New Mexico. Multiple movies have been filmed in New Mexico, everything from “The Avengers”, “No Country for Old Men”, “The Book of Eli”, and “Star Wars”, just to name a few. Netflix has already seen success in New Mexico with the series “Godless”, and “Longmire” (The Public Library Albuquerque and Bernalillo County, 2018). The sales price of the Albuquerque Studios has not been released, however, the city and the state is contributing $14 million to the purchase with the expectation of Netflix infusing $1 billion into the New Mexico economy over a 10 year period and creating 1,000 jobs per year (Davis, 2018).

A condition of the city and state contributions to the purchase price, Netflix will commit to direct spending on New Mexico productions of at least $600 million in the first five years and an addition $400 million on direct or indirect spending including leasing the space to other production companies in the following five years. If Netflix can maintain their average revenue and gross income growth, projected revenues could reach approximately $20 billion by year end of 2022. By increasing content produced by Netflix and content produced by other companies utilizing Netflix new studio and production space revenues could exceed project totals. An agreement to create 1,000 jobs, each year in a specific region can be very complex. However, with the different positions required to maintain and effectively operate a large studio and production space it can be done. In creating an additional 1,000 jobs each year along with the approximate 1,100 annual job growth creation, Netflix could see their employees count could reach as high as 13,915 by the end of year 2022. When done responsibly, this kind of job creation has a positive impact on the economy. 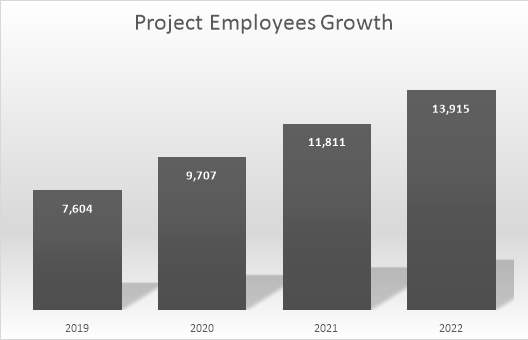 With the strategy of growing their streaming subscription business domestically and internationally, Netflix has earmark billions to increase their original content by approximately 700 original show and movies annually. With those expectations, Netflix could see their content library expand as high as 7,896 show and movie options.

Netflix needed to expand the physical space available to them to continue creating original content. Over the past 5-10 years, original content has been the determining factor in subscribers streaming service decisions. According to their K-10 Annual report, most of Netflix revenues are generated by the fees collected by subscribers and video sales of original content. Retention and acquisition of subscribers is the determining factor to the long-term success of any streaming service. By ensuring they have the capability to create and produce original content, Netflix is increasing their chances of retaining their current subscribers while acquiring new ones. The economic impact of Netflix’s decision will be seen on a national and international levels. Investment in any area will increase spending and aid in job creation. Netflix’s has begun producing content targeted specifically to an international audience so there is no market that is not being focused on.