Apple is a global company that produces devices such as iPhone, iPad, and iMac. Actually, it is specializing in Software and they have a system called IOS. With the technology evolution, hackers have advanced and find vulnerability in Apple software that allowed breaking the system. This way called jailbreak.

This project includes a general review about jailbreak and the way it works. Also its development over the years and mention names of some organizations such as iPhone Dev team, Chronic-Dev, dream team, Pangu, Evad3rs, PP25 and Keen.

Jailbreak is one of the words that grown fast recently. Apple prefers to design something and tell you, “This is how it should be used.” Apple came with the system that is fixed which mean you are not allowed to install tools that’s help you with your needs and because of that Apple is one of a biggest secure system in the world. Some people feel that they can’t do whatever they want with feeling that Apple’s operate system is like a jail. Jailbreak came to gives the people ability to break the operating system to do whatever they want whether to install tools or themes. Apple products are well-made but they had limitation. Jailbreaking breaks those limits and gives you more control in your device.

United States of America has a rule that allowing the jailbreak and you can jailbreaking your smartphone or tablets you want[1]. Apple support center [2] published a clearance that jailbreak is legal but you will lose the support (warranty). If you install jailbreak in your Apple product, Apple will not sue you because of that and all what they can do is to stop supporting your device and if something happens it is under your responsibility.

It looks like tethered jailbreak with addition thing that here you can turn off your device and boot it again without any problem. The features are limited [3].

It is the common jailbreak and the new one. It gives the user ability to run all the tools and applications they downloaded anytime they want. In this type, you can turn off your device without fear of losing the jailbreak [3].

There are many developers of a jailbreak, Cydia, and hackers of IOS system who have a wide fame in the community of iOS users and jailbreak system. These developers and hackers have great merit in making jailbreak a strong community. They have begun attacking the iOS system and deployment jailbreak since the early days of the issued of the first system for the iPhone. In July 2007, a few days after the release the iPhone system, a group of developers create the first tool of jailbreak, and shortly afterwards, there were many versions of tools for jailbreak. In the October 2007, they created the first jailbreak 1.0 which was also called (AppSnapp)

The bootchain [4] (also called chain of trust) is the system by Apple which can tries to ensure that only signed or trusted code is loaded on an iOS device.

The bootchain consist couple of deferent modules that load each other and between the loadings there are check points that Apple put it in order to prevent unauthorized access to the code.

/private/etc/fstabis is where all the iOS files are stores and must be patched. fstab is like a switch that is giving you the ability to control the media partitions and the permissions. By default, fstab is setting as a read-only mode that letting you to read or view only without making any changes. To be able to make any modifications, you have to set the fstab as “read-write” mode. It is very important for your Apple device because it is controlling the permission of the media partition and the root.

The big problem is to pass in all the files you need through the various checkpoints. The checkpoint is what Apple does in order to ensuring the file is legit or coming from a third party. Every file is signed by a key. The file will be through a way and be unusable if this file without kay.

In short, we can access to the door if we either find a back door entry (bypass) or unlock the lock (patch all checkpoints). Patching is a difficult and mostly not worth the effort. So, most people who make the jailbreak will try to find a backdoor entry or a bypass.

The limera1n exploit is the bootrom and iBoot exploit used to run unsigned code (and thereby jailbreak) the iPod touch 3rd Generation, the iPhone 3GS and all A4 chip devices. It was first used in the limera1n tool by “geohot”. It is used to perform a tethered jailbreak on the devices that mentioned above. The jailbreak can then be turned into an untethered jailbreak with other exploits, such as the 0x24000 Segment Overflow [5]. Limera1n is the final publicly disclosed bootrom exploit of any device. The last device released vulnerable to limera1n is the iPhone 4.

Jailbreak means that the user can download applications without the need of Apple store, and controls the tones and add modifications to the system. Also decoding constraint on company communications device, such as AT & T or Verizon, it can go further than this when some people want to amendment on the phone. The majority is in the process of jailbreak for your iPhone, using Cydia to download the software tools to your device and install them. Cydia is an application or store tools allows owners devices that have been untying them to browse the applications and tools and carry it to the device without any restrictions

There are many people prefer to stay away of Jailbreak their devices. When you Jailbreak your device that means your device is no longer under the Apple ensuring [2]. All tools and applications you download are not licensed by Apple and it may break your device because it is not secure. Also one of important things in the device is the battery. Jailbreak consumes a lot of power on your device which mean your battery couldn’t stand long.

3.1. How to know if your device can jailbreak

As a first step you have to know the version of your IOS system. Then search on Internet if this version has a Jailbreak or not. The best way to search is to get into the Jailbreak teams websites. Since Jailbreak is published by one team other teams published their copies too.

All jailbreaking tools available to install in application called Cydia, which is similar to the Apple App Store but applications available on Cydia are not checked by Apple and developers can submit their applications to distribute through Cydia. 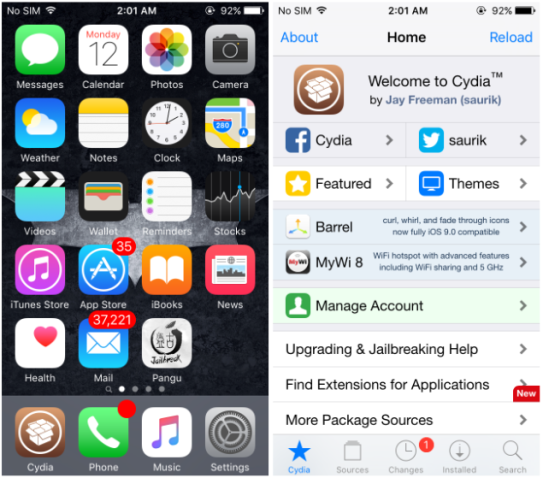 Cydia is a third-party installer application for all Apple devices. Developed by Jay Freeman (Saurik), Cydia is similar to the official App Store. Cydia is a manager mobile application for IOS, which enables the user to find and install tools or software packages on jailbroken device. It’s important for you to jailbreak your IOS device to get the Cydia. With Cydia everyone has the option of customizing their devices [6].

Cydia is a store depends on the developers. The sources are small stores of the developers to upload their tools on it. Cydia came within BigBoss source. This source is built-in the Cydia because it is by the Cydia creator. If you want to install other developers’ sources follow these steps: 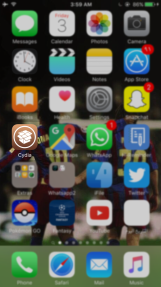 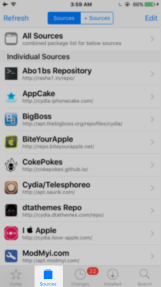 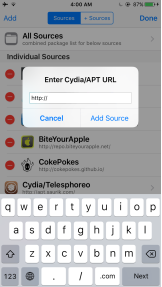 Now the source will be add into your list of sources and can search on any tool in it and install whatever you want.

The security without Jailbreak is under Apple control. Apple has a store includes more than 2 million of applications [7]. These applications are not only for smartphones only. They support tablets, Apple TV and smart watches. Apple takes two days to approval a new application that uploaded from a developer [8]. These two days is giving Apple a time to review the app submitted to the App Store to determine whether it is perform as expected, reliable and is free of offensive material. Apple reviews every app submitted based on a set of technical, content, and design criteria.

We agree Jailbreak is a risk for your device. This is for people with no knowledge of technologies. Privacy is one of those things that most people will say they care about, but they really don’t. However, if you truly do care about your privacy, device jailbreaking is a good way for that. Jailbreak is giving you tools to hide your information of others, even of Apple. There is another tool take care of your phone when it is stolen. When the criminal enter wrong password the tool take a selfie (photo from front camera) and send it to your E-mail with the location. Those are simples of thousands of tools give you a security more than device without Jailbreak [9].