Topic 1: Give two examples of real world distributed applications that were not discussed in the class slides (Hospital Management system, Airline reservation system, Banking system). You should not only specify what the application does, but also provide at least 3 features of the system (hardware technology, software technology, integration features, number of nodes, network characteristics, etc.)

This is a computerized Management information system. It is used by the National VISA Center (NVC) to manage the processing of immigrant visa petitions received from the Department of Homeland Security (DHS), United States Citizenship and Immigration Services (USCIS) regional service centers and district offices. The information shared by IVIS is used for processing; auditing and tracking of individual immigration visa applications as well as tracking the number of immigrant visas assigned that are subject to numerical limitations based upon the visa classification and country of chargeability. 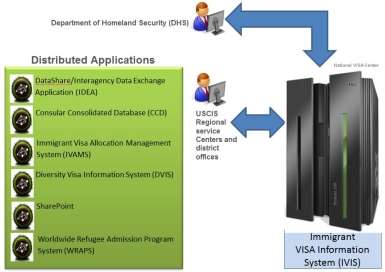 Only internal organization that has access to IVIS data is the Bureau of Consular Affairs (CA).

IVIS System is used by CA for issuing visas to foreign nationals and passports to U.S. citizens. IVIS results are used as a data source for this assessment at Posts abroad and domestic passport agencies.

Specifically, data is shared among the following CA applications:

This mainframe system has Networking z/OS network capability which includes a fully -featured communications server with integration of SNA (System Network Architecture) and TCP/IP protocols, making it a large server capable of serving a large number of worldwide clients simultaneously

GS-Retail is a largest retailer in South Korea. They are using Retail management information system (RMIS) to support their distributed stores by linking them together using distributed applications. Below are the features of this GS-Retail’s RMIS:

Integration features: Easily scalable and expandable solution where data nodes can be added to the existing cluster solution to expand the capacity of the system.

Network characteristics: Network is fault- tolerant and resilient. This system has two networks – Public (for external client communication) and Private FCM Network which is used by the system for internal communication between the data nodes. For public network, two HBA adapters were provided which were bonded together.

Packet switching network is a network which routes digital data in small pieces called “packets”, each of which proceeds through the network independently. This digital data is nothing but a bit stream with encoded information. Packet is not really a physical thing. Thus, packets switched networks transport packets. This network is in many ways similar to the transportation network of roads, highways and intersections which transports vehicles that carries people and goods.

CLAIMS 3 is the case management system used by USCIS that supports and maintains officer casework documentation and tracking for most benefit requests. USCIS oversees lawful immigration to the United States. It receives and adjudicates petitions, applications, and other requests for immigration benefits.

ICMS is a web – based front-end to CLAIMS 3. ICMS can be used to review, modify, and track the

3 features of the system (hardware technology, software technology, integration features, number of nodes, network characteristics, etc.) :
CLAIMS 3 and associated systems are old, legacy, mainframe systems that do not have the capability to interface in real-time with other systems or to generate reports, metrics, or aggregated statistics. CLAIMS 3, includes the Mainframe, Local Application Network (LAN), ICMS, and MFAS.

But CLAIMS 3 still serves as the authoritative source case management system for certain benefit requests because so many other tools and systems point to it.

Software technology : Data Replication technology is used to replicate data from CLAIMS 3 across many systems and tools within USCIS due to the technical limitations of CLAIMS 3 itself.

This system stores the information related to:

IVIS applications assists NVC in tracking and processing immigration visa petitions based on local necessities and requirements established by the State Department. The immigrant visa issuance process begins with the submission of a petition for immigration to the USCIS. USCIS reviews and adjudicates the petition and forwards approved petitions to the State Department for visa processing.

Distributed apps can communicate with multiple servers or devices on the same network from any geographical location. The distributed nature of the applications refers to data being spread out over more than one computer in a network.

Distributed applications allow multiple users to access the apps at once. Many developers, IT professionals or enterprises choose to store distributed apps in the cloud because ofcloud’s elasticity and scalability, as well as its ability to handle large applications or workloads.