Ethics has been adressed from various perspectives and, consequently, defined from diverse standpoints. However, for the purpose of this essay it will be viewed beyond the prohibitive or sectional nature of it and instead address the meetpoint of most theories: considering ethics as a universal practice that trespasses the personal boundaries and the imposition of principles or expected conducts of individuals, and rather viewing it as the reciprocal influence of giving the same importance to each participants’ interest (Singer, p.11; Trevino and Nelson, 2011, p.17). Once this perspective is identified, it will be brought up in discussion a more individual and conductual approach, deepening into “the principles, norms, and standards of conduct governing an individual or group” (Trevino and Nelson, 2011, p.17) .

Talking about ethics in the workplace environment, it is focused on the relationship between profitability and ethical behavior at various levels of the organization, adressing the influence of each of the spheres – personal, organizational, and systemic – among each other and its impact of the applied practices (Enderle, 2018, p.620; Henk Van Lujik, 1997, cited in Fisher, Lovell and Valero-Silva, 2013, p.38). According to Grosser, Moon and Nelson (2017, p.626), even though general perspectives of Ethics can be used to address dillemas at the workplace, there has also been a growing area of theorization surrounding the particularities of business ethics.

Starting with the identification of the different approaches, two main blocks will de addressed: the prescriptive –grossly considered the moral guide that assumes people’s desire is to take the right decisions – and the descriptive – building up on the idea of the psychological individual influences on decision-making (Trevino and Nelson, 2011).

In the building block of the prescriptive approach, we have three theories. Deontology focuses on decision-making through what considered to be right rather than good; “they believe that sometimes it is permissible, and sometimes required, to bring about suboptimal states of affairs”  (Lazar, 2017, p.580). This theory’s standpoint establishes that regardless of the consequences of a decision, compliance with what is considered right comes first (Timmermann, 2015, pp.77-78). According to Trevino and Nelson (2011, p. 42-44) and Singer (1993), the principles this current follows take into consideration several values – including respect, fairness, and justice – to establish a set of rules and priorization of these rules for guidance.

Consequentialism on the other hand establishes that the attention should be on the consequences rather than on the duties (Palmer, 2017, p.89). The desire to obtain our society’s broader good and have benefits instead of harms become the outcome of the equation is priority (Trevino and Nelson, 2011, p.40-42). One of the greater challenges of taking this happiness–weighting posture is the ability to identify all the possible outcomes without leaving out any minority’s considerations or impact (Fisher, Lovell and Valero-Silva, 2013, p.117; Trevino and Nelson, 2011, p.40-42)

Finally, virtue-ethics “is located on the central pillar of character and culture (….) virtues are not ‘ends’; rather than they are ‘means’ (Fisher, Lovell and Valero-Silva, 2013, p.131). According to Trevino and Nelson (2011, p.46) this perspective allows us to consider the individuals’ particularities – such as their character, integrity and what motivates them – as the main topic and rather consider principles as part of the environment or context in which the individual is developing; the subject is central rather than the act. 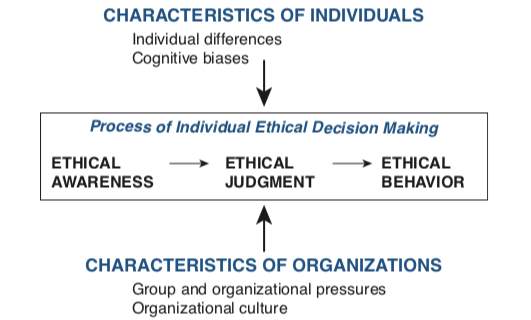 Deepening into the descriptive approach, according to Trevino and Nelson (2011, p.71) focus is on the influence of individual’s characteristics in the ethical decision-making process. Figure 1 (above) allows us to visually represent this process. It starts with the Ethical Awareness, the one that establishes that it’s important that the individual is capable of identifying what is the ethical concern they are dealing with in the current problem they’re embracing. Following this comprehension, the individual will be lead into the Ethical Judgement part of the process, in which – as it is detailed in Figure 2 (below) as well – the main purpose is to analyze different components of the situation, going through the facts, consequences, feelings and emotions, and potential biases. Once all the so-called areas of potential distortions have been taken into consideration, we’re bound to the Ethical Behavior: the resolution of what will be their flow of action after taking in all the previous analysis during Awareness and Judgement plus the challenges of its surroundings, such as the culture of the organization, rules, and leadership. Among the individual characteristics that could impact in the flow of this Decision-Making Process, variables such as the locus of control, machiavellianism, the moral development of the individual in a cognitive level, and the moral disengagement are taken into consideration.

As we can see in Figure 2, it is attempted to summarize the guidelines provided by Trevino and Nelson (2011) that pursues to integrate the Prescriptive Approaches. However, the same literature also challenges this steps in two ways: firstly, it highlights the importance of not visualizing this guideline as a linear process but keeping in mind the importance of seeing through all 8 of them – whichever the order – , and secondly, it challenges the steps seeing them from the descriptive approach and encourages the individual to go a step beyond: internalize the findings of each step and identify the impact that the person’s internalizations have on the decision making process.

Quite similarly to the suggested flow of action discussed before, Kolb’s Model –

which adresses problem solving by “the integration of dialectically opposed mental orientations” (Osland et al., 2007, p.289) – suggests having a broad visualization of the information, ideas, stakeholders and priorities, considering as well the way ones influence the others, prior to the implementation of any action (Figure 3). 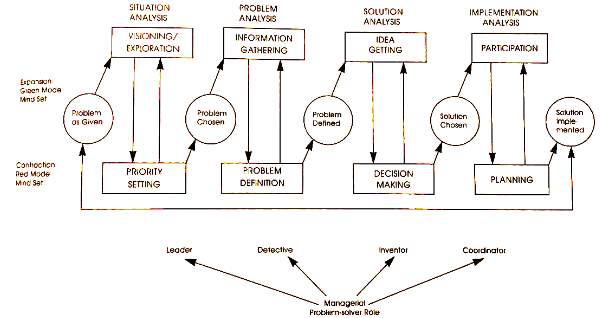 In the same way, (Brown, 1999, p.7) supports the idea that “the quality of our decisions depends on the quality of our resources”, being enfatic on the importance of considering the analysis from the general (value judgements and assumptions) to the specific (proposals and observations) elements of each resource (figure 4).

In order to execute the social learning approach effectively, it is required to create an environment in which the individuals would have the oportunity of practicing, be exposed to feedback, and re-enacting the situation in a real-life experience: the so-called behavioral modeling (Landy, 1989, 323). Through this process, individuals have the opportunity of living an action learning strategy, in which with the main objective of solving a specific problem they develop a new set of competencies to be able to overcome an issue (DuBrin, 2002, pp.309). Finally, to complement in a holistic environment of learning, the relevance or role-model or mentoring figures would be considered crucial during the ethics learning process to strenghten the perception of the organization regarding what is expected from its individuals (Trevino and Nelson, 2011, p. 180).

Regardless of the nature of the organization, managerial figures will be exposed to certain types or situations where hard ethical-dillema-filled issues will be set on the table. Taking into consideration the strength of the structure models such as Trevino and Nelson (2011), theories do provide an ‘easy to follow’ guide for managers to be able to resolve practical ethical dillemas. The core ethical implications taken into consideration in the most traditional perspectives of ethics can also be found in more managerial-focused models such as the one describred by Osland et al. (2007). Nonetheless, if such theories and models are to be seen only as an in-class training concept, they might as well not be sufficient for managers to learn how to handle their concerns. It is imperative that an effort is made to intentionally transport the lessons into situations as a part or the organization’s daily environment, where managers can have real-life behavioral exposure and can receive not only feedback but a mentorship related to this practical ethical dilemas. This way, following the concepts of social learning previously mentioned, an in-depth ‘know how’ would be most likely ensured, allowing them to navigate with ease through the Ethical Decision Making Theory of Trevino and Nelson (2011): individual perceptions influencing somehow in the process but taking into account all the factors evolving around. Therefore, ensuring a more holistic approach for training would be an interesting approach of research. Furtherly deepening the investigation into the impact this kind of training would have on the perception of right vs. wrong, the individual variables influencing the general definition, and the quality of decision making would be suggested in order to deepen the reccomendations on ‘how’ we teach ethics rather than just focusing on the ‘what’.