Being one of the largest and fastest growing airlines in the United States and globally, American Airlines faces a wide range of challenges due to the competitiveness of the industry. In 2011, the company had filed for bankruptcy protection but it emerged from the situation two years later (Levine-Weinberg, 2018). However, the impact of such cases could be devastating in the airline industry because issues of bankruptcy pose danger to revenue generation. Nevertheless, the industry condition improved later following the merger with US Airways. Due to the merger and growth witnessed in recent years, the company now commands over 20% of market shares compared to its rivals (Levine-Weinberg, 2018). Over the years, the company has made tremendous steps and strategic measures to remain competitive and stay ahead of competitors.

Despite the progress that American Airlines has made in the recent years and rapid rise in profitability since the 2013 merge with the US Airways as well as stability in fuel prices, challenges exist (Kalemba & Campa-Planas, 2018). Since early 2016, the company’s earning began to recede quickly, rising a major threat to its profitability, competitiveness, and growth. In late 2018, the company released yet another subpar earning report despite several initiatives put in place to stabilize its earning. As a result, the Airline now faces stiff competition from other companies such as United Continental which makes it difficult for the company to achieve the kind of rebound that the management expects.

Furthermore, the American Airline had to cope with the increase in the cost of jet fuel last year although this issue weighed on earnings across the tourism industry. Notably, American Airlines was hard hit since its unit profitability growth slowed significantly compared to its rivals. Financial statement and reports from the third quarter of 2018 shows that the Airline’s revenue per available seat mile (RASM) increase by a modest 2.8 percent but this could not offset the 37.8% surge in the company’s average jet-fuel cost that increased to $2.30 per gallon (Levine-Weinberg, 2018). Comparing it with one of its closest competitors, United Continental delivered a strong RASM 5.7% increase in the close of the third quarter. In addition, the adjusted pre-tax margin for American Airline plummeted to 6% compared to United Continental’s 9.7% for the third quarter (Kalemba & Campa-Planas, 2018). As a result, American Airline faces some challenges due to fluctuating fuel prices which have had an impact on its revenue.

Comprehensive strategic planning is needed as the company completes the first quarter and enters the second quarter to ensure that appropriate strategies have been put in place. Despite being the largest Airline company by fleet size, its performance has been dropping compared to its competitors such as Delta and United Continental. Strategic assessment of its operating environment can unveil measures that can be implemented to reduce its operating cost despite the unpredictability of the jet fuel prices. As a result, this research paper seeks to establish strategic measures that American Airline can implement to remain competitive in the travel industry.

Air transport and tourism are highly interconnected and overlap in many ways. Studies have shown that air transport has a tremendous impact on the destination’s economy, particularly the tourism (Spasojevic, Lohmann, & Scott, 2016). According to Berghöfer and Lucey (2014), the tourism industry is a driving factor and facilitator in earning and profitability in the air travel industry. However, the US air travel industry has undergone major changes in the last two decades. The events of 9/1l led to a drop in flights and imposition of security procedures that had greatly influenced the costs of air services. A recession in 2001, as well as the 2007-2009, also affected air travel demand as the jet fuel prices increased substantially. The recent increase in fuel prices has also led to billions of dollars losses in the airline’s industry, prompting firms to merge and increase in acquisitions and liquidations. Companies responded by reducing capacity, eliminating inefficient aircraft types, and raising revenue by imposing expanded ancillary fees. Such responses led to return in profitability in the in the past.

The recent performance history of US airlines can be viewed in the context of external shocks, industry response to the shocks, and the effects of the response. Two main external shocks to the US airlines industry in the recent past included the economic recession that led to the reduction in air travel demands an increase in jet fuel prices which led to increase in the cost of operation and travel demand. Research shows that the US economy witnessed two major economic recessions since 2000 which had a negative impact on air travel demand. The first recession occurred in 2001 while the other one occurred from 2007 to 2009 (Spasojevic, Lohmann, & Scott, 2016). Studies have found significant evidence of negative impact of both recessions on travel industry due to decline in disposable income and per capita income of US citizens from 2000 to 2011 (Zou, Elke, Hansen, & Kafle, 2014). As a result of the reduction in purchasing power, there was a decline in demand for leisure air travel which slowed down the growth of the airline industry.

Similarly, the prices of jet fuel have increased in recent years, with 2004 to 2008 and 2017-2018 have had the worst impact on the industry. These increases in prices have become major sources of financial challenge for airline companies. The prices almost quadrupled from 2000 to 2018, with the highest being 2012-2013 when the prices went as high as $120 per barrel (Sibdari, Mohammadian, & Pyke, 2018). As a result, fuel accounted for 35%-40% of the overall cost of airline expenses in 2013 but that has dropped to approximately 15% in the last two years. Research shows that the increase in fuel prices led to a decline in overall seat capacity offered by many airlines. 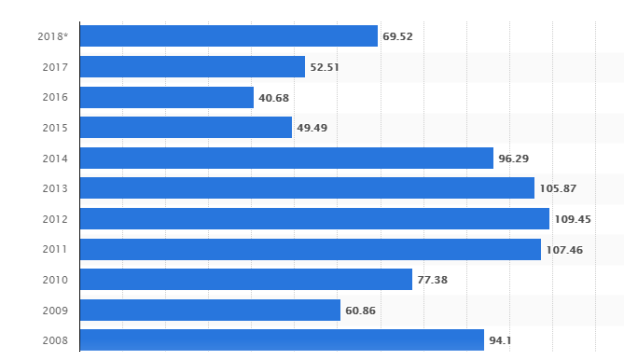 Industry response to financial strain differed from airline to airline. Ferrer-Rosell and Coenders (2017) noted that most companies’ responses included consolidation, capacity reduction, eliminating efficient aircraft, increasing fare prices, and increased dependence on ancillary revenue. Airlines reduced the use of fuel-intensive aircraft types and also hiking fares to pass the costs to the consumers due to fuel cost increases. Despite the strategies, 49 US airlines filed for bankruptcy between 2001 and 2013 although most of these bankruptcies did not lead to carrier ceasing operations (Lim & Hong, 2014). Nevertheless, bankruptcy reorganization allowed carriers to marge while others negotiated acquisition deals. These strategies led to substantial consolidation of seat capacity of both domestic and international seats. Some airlines also closed under-performing hubs, especially those that had experienced drastic services decline in recent years. 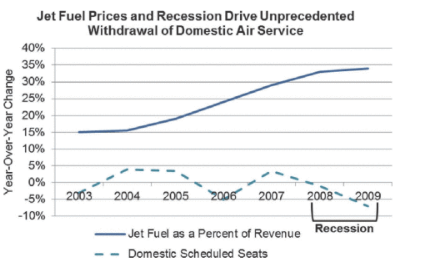 For example, scheduled domestic flights in areas such as Memphis, St. Louis, Pittsburgh, Cleveland, and Cincinnati declined by almost 40% from 208 to 2018 (Atems, Bachmeier, & Williams, 2018). Other industry responses included the increase in short-haul flights as well as flights with smaller aircraft. By identifying measures to reduce operation cost, Hwang and Lyu (2018) developed a taxonomy to identify destinations that can be cut to reduce cost. These strategies included identifying the demand of flights in the destination, proximity to another high-demand hub, and presence of Ultra large crude carrier. These measures, among the others identified, can be instrumental in reducing the cost of operation.

From the literature review, it is evident that the airline and hospitality industries are closely connected. As a result, any substantial factors that influence the cost of operation in the industry also affects the overall demand in travel and as a result, a decline in the tourism industry. Evidently, air transport is affected by a wide range of factors, the leading ones being economic stability and the jet oil prices. American Airline, like many airlines, also gets affected by these factors. As a market leader by the fleet, American Airline management can learn from the literature and take precautionary measures to prevent losses in the wake of increasing jet oil prices, which can save the tourism sector. Instead of increasing fare as a way of transferring expenses to customers, the company can focus on other measures such as the use of economical aircraft, consolidation with other smaller airlines, and maximizing flights on high-demand hubs. These measures can be instrumental in preventing possible decline profitability of the company and the ramifications it may have on the tourism industry due to the large market share it commands.

Although this research has examined measures that American Airline can put in place to remain profitable based on the literature, much still needs to be done in other areas that could also have an impact on profit of the company. For example, an assessment of their competitors can give details about what the company is doing right and identify areas of improvement. Similarly, customer experience and global challenges such as terrorism can have a devastating impact on the general profitability of the company. Assessment of these factors and also reviewing of emerging markets can identify opportunities for growth.