The ancient Greek city-state occupied an extremely important position in its history, it gradually developed in the 8th century BC. Polis which is a basic state form of Greece generally centered on a city, including the surrounding villages. Among the many city-states in Greece, Athens is not only the ancient but also the most powerful city-state in Greece.  This paper will introduce the ancient Greek city-states by focusing on the geographical location, main features and city history of Athens.

The classical Athens is located in the southeast of Greece. In terms of specific latitude 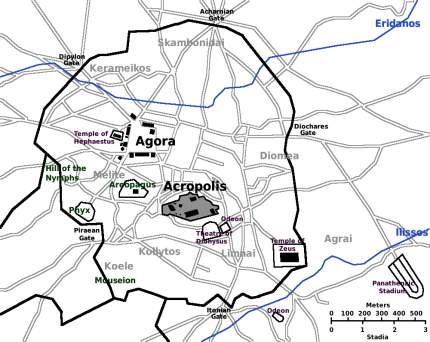 and the Ilysos River pass through the city.

After the fall of Mycenae in 800 BC, the acropolis became a sacred place where many gods were worshipped. The 5th and 4th centuries BC were classical periods of Greek civilization, while the culmination of the history of Athens. During this period, the layout of the city of Athens presented a state of freedom, and the city buildings did not require deliberate symmetry. It combined with special and complex terrain in planning, and centered on the Acropolis and Square. As can be seen from picture 2, Athens was divided into two major sections, the Acropolis and the Lower City. The Acropolis is located in the center, it is first the home of the gods, and the priesthood is also established in this place. “The Acropolis was the artistic and religious seat, with temples and great status. The Parthenon dominated the site” (Bunson, 1995, p. 41). In the beginning, the Acropolis was a defensive fortress, but it lost the military defense function after the classical period and was completely used for religious sacrifices. The various buildings of the Acropolis are built according to the terrain, so they are in an irregular state. The Acropolis had large buildings in the 6th century BC but was destroyed by invaders from Persia. It was not until 448 BC that the Athenians began reconstruction work under the leadership of Pericles (Moulton, 1998, p. 52). The ancient Athenian Agora is located near the Acropolis and is the center of urban political and social activities, as well as the hub of commerce and trade. Meanwhile, “the Agora also played serious a role in religious festivals. The architectural layout of the Agora was centered around the Panathenaic Way, a road the ran through the heart of Athens to the main gate of the city, the Dipylon” (Atlas Obscura, 2019). There is no fixed form in the square, and the arrangement of public buildings and facilities is also irregular, they are distributed in or on both sides of the square according to local conditions. The well-developed Agra has many public facilities such as sculptures, shrines, etc. It not only functions as both political and commercial, but is often used as a venue for festivals and cultural events, which is conducive to strengthening the collective sense of honor and democratic awareness of citizens. According to Encyclopædia Britannica, a dramatic competition was held here before the construction of a separate theatre, “Various public buildings and shrines were erected around the borders of the square, including the Basileios (Royal) Stoa, where the archon Basileus, one of the chief magistrates of the city, had his headquarters; the Old Bouleuterion (or Council House); and a large enclosure (100 square feet) that probably housed the Heliaia, the largest of the popular lawcourts” (Encyclopædia Britannica). George Grote, a classical historian, mentions that the defenses of the original Greek towns were not derived from the city walls, but relied on complex terrain (2010). When the Athens 5th century recovered from the destruction of the Greco-Persian Wars, Athens rebuilt the walls to the port of Piraeus, so that the port formed a whole with the city of Athens, completing the complete defense system from Athens to the seashore. In 450 BC, Athens strengthened the construction of the Long Walls in this war with the allies of Peloponnese Sparta, the South Long Wall running from the city to the old port at Phalerum, the North Long Wall to the newer port at Piraeus. In 431 BC, the Peloponnese War broke out, and Sparta first attacked Attica. Pericles’ strategy is to take a defensive stance on land, avoid conflict with the Spartans on land, and use the walls of Athens to the long-walled work of Piraeus to maintain a land-based passage with the outside world. Despite facing a strong enemy, the city of Athens is still protected by the Long Walls. But after realizing that they can no longer fight against Athens on land, Sparta transferred to the maritime battle. The expedition of the Athenian Sicily failed and lost a large number of naval elites. Then the main fleet of Athens was defeated by the Spartan Navy’s trap. Since then, Athens lost its sea power and supplies. Athens surrendered in 404 BC and accepted the defeated treaty and dismantled the long wall.

In conclusion, there are many reasons for the development of Athens in the classical period. First, the special and complex geographical factors of Athens determine the external form of the city. Second, the Athens economy has formed the foundation of urban development. Athens is the center of the city-state, and its industry and commerce are very prosperous in the classical period; the city of Athens connected ports by the Long Wall, allowing foreign trade to flourish. Last but not least, the political system and war have a great impact on the development of the city. Athens played a major role in the Persian Wars, won a lot of resources and slaves, and enjoyed the tribute from the Delos League, forming the prosperity of the city of Athens; after the failure of the Peloponnesian War, the industrial development of the city was affected, the national politics is also in a state of collapse, and the escape of slaves reduces the labor force, which inevitably causes the decline of the city of Athens.