In 1888, during the late summer a series of murders happened in London, England’s poorest district, Whitechapel. The victims of these murders were female prostitutes whose lives took a turn for the worst. This case has remained unsolved since it was opened in April of 1888 (Rosinsky) . This report will be covering the history of the murders, the principle murders, and possible suspects for the murderer.

History of the Whitechapel Murders

The Whitechapel Murders began on April 4th in the late evening. Emma Elizabeth Smith, a prostitute, was assaulted by three men while she was walking back to her lodging house. She survived the attack however she died a few hours after arrival to her lodging house (Bulls Eye Lantern) . Several months later, another prostitute, Martha Tabram, was found dead with “thirty-nine stab wounds, nine in the throat, five in the left lung, two in the right lung, once in her heart, twice in her spleen, and six in her stomach. Her body was laid with her genitals exposed however no evidence of intercourse was found” (Bulls Eye Lantern) . Five other murders followed and the police began to suspect a single murderer was behind them. A total of eleven murders were recorded in Whitechapel however only five of them were believed to have a common killer.

An anonymous individual, Jack the Ripper, is believed to be responsible for the murders of Mary Ann Nicols, Annie Chapman, Elizabeth Stride, Catherine Eddowes, and Mary Jane Kelly. The Ripper is believed to be male since witness’ reported seeing a male perpetrator with the women and officers claimed a woman would not be strong enough to commit the murders. During the case, conflicting descriptions of the Ripper arose with some saying that he was a butcher or a doctor due to the way his victims were slaughtered (Rosinsky) . Fun fact, the Ripper got his name due to the anonymous letters and postcards he supposedly sent to the police office (Rosinsky) . Recent research suggests that Martha Tabram may have been another of the Ripper’s victims however she isn’t considered to be one of the “canonical five” (Bulls Eye Lantern) .

These five victims are grouped together and called the “canonical five” (Bulls Eye Lantern) due to the way their bodies were found. All of these women were found with their throats slit and their bodies mutilated with the exception of Elizabeth Stride who only had her throat slit. The Ripper’s killing method was considered to be “rash and spontaneous” (Bulls Eye Lantern) and medical professionals speculate that he would first strangle his victims to lower their blood pressure which would minimize blood spray (Bulls Eye Lantern) . They are all considered to be the victims of Jack the Ripper. 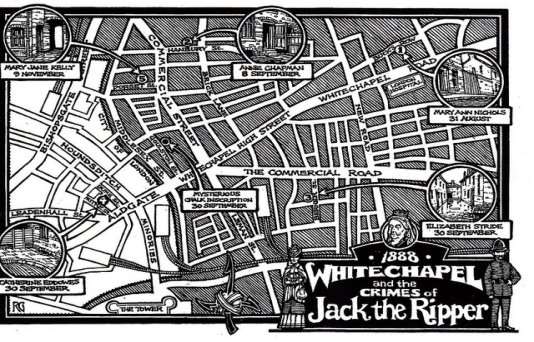 First Murder. At one in the morning on August 31st, Mary Ann Nicols was found lying in a pool of her own blood. She was out getting her doss money for the fourth time that night after spending the earnings of her other three times. At three am she was found with her “throat cut open ear to ear lower part of her person completely ripped open” (Rosinsky) . Ms. Nicols’ death is considered to be the start of Jack the Ripper’s murders. 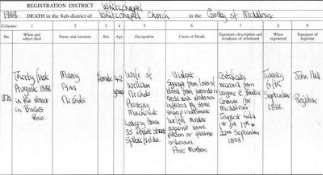 Second Murder. On September 8th Annie Chapman was found dead against a fence of a tenement house at daybreak (Bulls Eye Lantern) . Medical professionals discovered that her killer removed her uterus, sections of her bladder, and most of her vaginal canal (Bulls Eye Lantern) . Her clothing was pulled up to her knees, her face was covered in blood, severed limbs were near her corpse, and several of her internal organs were removed (Rosinsky) .

Third Murder. Elizabeth Stride’s death isn’t nearly as violent as the other five Ripper victims. Her corpse was found lying against a building located by a street corner on September 30th. Witnesses report seeing Ms. Stride arguing with a man who then pushed her down the stairs; the man elected to stay out of the argument since domestic fights were common. Upon inspection of the body, blood was found on her hands which may have indicated a struggle between Ms. Stride and her attacker. Ms. Stride is the only victim of Jack the Ripper who did not experience body mutilation. (Bulls Eye Lantern) .

Fourth Murder. The Ripper struck again on September 8th mere minutes after the discovery of Elizabeth Stride’s corpse. Catherine Eddowes’ corpse was found forty minutes after with extreme facial mutilation. Police officials couldn’t recognize Ms. Eddowes’ body due to the mutilation until a friend of Ms. Eddowes, John Kelly, recognized a ticket her corpse was holding. The officer that found the corpse said that she was “cut up like a pig from the market” (Bulls Eye Lantern) . Ms. Eddowes’ facial mutilation included: the removal of her nose tip, cuts on her eyelids and an ear, and triangular cuts on her cheeks. Her throat was cut to the spine, knife marking were present in her vertebrae, a long zig-zag cut stretched from her sternum to her pelvis, and her uterus and left kidney were completely removed (Bulls Eye Lantern) . 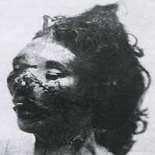 Fifth Murder. The murder of Mary Jane Kelly is considered to be “the Ripper’s masterpiece” (Bulls Eye Lantern) by many studiers of the Jack the Ripper murders. The disfigured corpse of Mary Jane Kelly was discovered on November 9th in her bed. Details of the savage assault are:

He cuts her throat from left to right, right back to the spinal column. He cuts her from vagina to breast bone like the other victims. He takes out her heart. He then cut off her breasts with circular incisions; put one by her head and one by her feet. He cuts off her stomach flesh in three flaps and puts it on the bedside table. [Then he] Sliced off her chin, her lips, her nose, her eyebrows, her eyelids. Skins her cheeks, skins her forehead. Completely disfiguring this corpse. And if that’s not enough he then slices off the flesh of her thighs and you can see the exposed bones. (Bulls Eye Lantern) 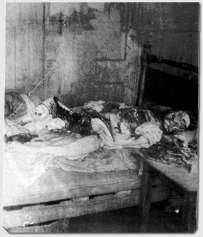 The question of “Who is Jack the Ripper?”, remains a mystery today (Rosinsky) . Speculation occurred throughout the entire case but Britain’s police force and top detectives still couldn’t find a solid lead on the murderer. After the murder of Annie Chapman, police thought that Jack the Ripper had medical training in order to complete the mutilation he did. Anti-Semitism arose when Jewish Shoemaker, John Pizer was arrested on suspicious grounds for Ms. Chapman’s murder. A folded leather apron was found near Annie Chapman and Catherin Eddowes’ corpses made officials think that the murderer may have been a butcher. Modern forensics testing have been used to attempt to pin the murder but it hasn’t proven helpful (Bulls Eye Lantern) .

A total of eleven murders were committed in Whitechapel, England during 1888. A self-proclaimed serial killer, Jack the Ripper is believed to be the mastermind of five of the murders. Even though advancements have been made in forensics, we still don’t know who Jack the Ripper could have been.