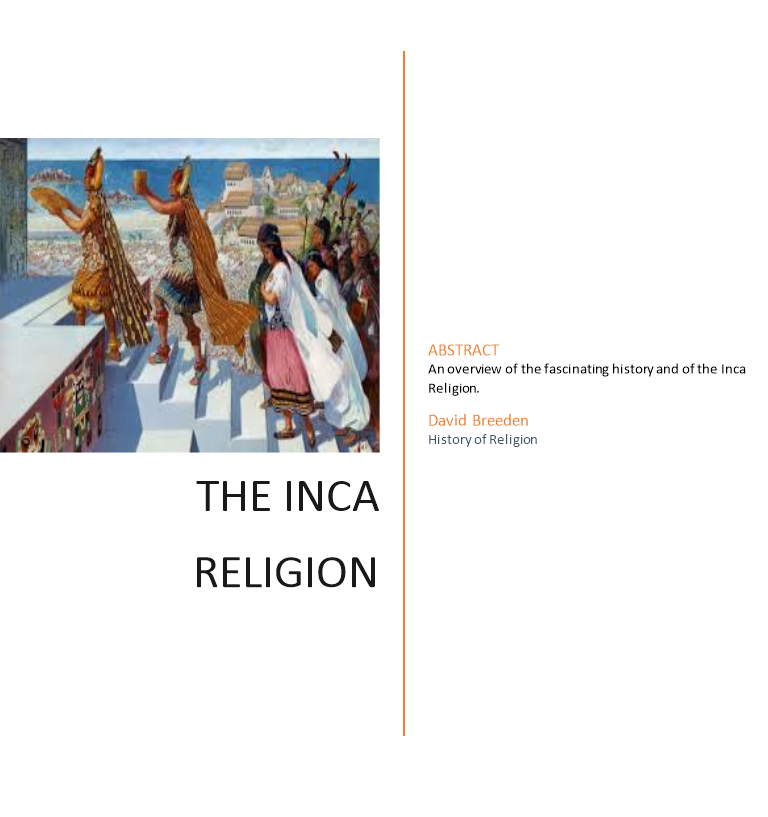 Perhaps one of the most fascinating and awe inspiring religions in human history is that of the Inca’s. Countless people have been captivated by this religion over many generations. Many books have been written and movies made to capture the essence of this religion. After reading about this paper, it will be clear how incredible these people and their religion was.

To first understand the religion of the Inca’s, you must first know the history of the people. The Incan civilization originated from a tribe in the Cuzco area of Peru. The Incas were one of the largest, richest and most powerful empires before pre-Columbian America as their territory covered a massive area at its peak. The Inca Empire crossed many boundaries as it conquered many countries and areas through a variety of means: from conquest to peaceful assimilation. This lead to the Inca Empire gaining a large part of South America. By its height in the 1520s, the Inca Empire stretched 3,500 miles from present day Argentina, Bolivia, Chile, Columbia, Ecuador to the area in which the Incas originated, Peru. It was the largest empire on earth at the time. After each area had been conquered, the Incas would take control of the area by imposing their language and organizational skills on the people. This would be followed by building improvements to the area such as creating roads for the people to travel on, irrigation canals, stone buildings and fortresses. The Incas had astonishing and technologically advanced masonry techniques for their time. The estimated population of the Inca Empire at its peak was around twenty million people with the official language being Quechua.

To control such a huge area, the Incas built roads, including both mountainous and coastal routes. The Inca Empire was ruled with efficiency in part because of a superb highway system that included intermittently paved roads up to 24 feet wide, tunnels, bridges, and stepped pathways cut into living rock. The principal highland road atop the spine of the Andes, ran 3,450 miles from the Colombia-Ecuador border to central Chile. Lateral roads linked it to the coastal highway. Ironically, the very roadways that made it possible for the Inca to control their vast empire, rapidly moving an army to quell a rebellion, were also the avenue of the empire’s downfall, giving the Spanish conquistadors under Pizarro direct access to the heart of the kingdom. One existing part of the road between Cusco and the palace of Machu Picchu is called the Inca Trail. The amount of control exercised by Cusco over the rest of the empire varied from place to place. Tribute paid to the Inca rulers came from farmers of cotton, potatoes, and maize, herders of alpacas and llamas, and craft specialists who made polychrome pottery, brewed beer from maize, wove fine wool tapestries, and made wooden, stone, and gold, silver and copper objects. “Inca cities were as large as those of Europe, but more orderly and by all accounts much cleaner and more pleasant places in which to live” (McEwan, 56).

The Inca were organized along a complex hierarchical and hereditary lineage system called the Ayllu system. Ayllus ranged in size from a few hundred to tens of thousands of people, and they governed access to such things as land, political roles, marriage, and ritual ceremonies. Among other important duties, Ayllus took maintenance and ceremonial roles involving the preservation and care of honored mummies of the ancestors of their communities. In Inca social structure, the ruler Sapa Inca, and his wives, the Coyas, had supreme control over the empire. The High Priest and the Army Commander in Chief were next. Then came the Four Apus, the regional army commanders. Next, were temple priests, architects, administrators and army generals. After them, were artisans, musicians, army captains and the quipucamayoc, the Incan accountants. At the bottom were sorcerers, farmers, herding families and conscripts.

The only written records about the Inca that we can read today are documents from the Spanish conquistadors of Francisco Pizarro. Records were kept by the Inca in the form of knotted strings called quipu. The Spanish reported that historical records, particularly the deeds of the rulers, were sung, chanted, and painted on wooden tablets as well.

In the Inca Empirec several polytheistic religions were practiced by its different people. Most religions had common traits such as the existence of a Pachamama and Viracocha. The Incas controlled religion to give the empire cohesion by having conquered peoples add the Inca deities to their pantheon. Inca deities occupied the three realms: Hanan Pacha, the celestial realm in the sky, Uku Pacha, the inner earth, and Cay Pacha, the outer earth where humans live. The most important deities of Hanan Pacha were Inti, the sun god, and Mama Quilla, the moon goddess. Inti Raymi was the festival of the sun god, the largest and most important Inca festival. The lightning deity also resided in Hanan Pacha. Uku Pacha was the domain of Pachamama, the Earth mother, who is universal to Andean mythologies. Kanopa was the God of Pregnancy. Con-Tici Viracocha Pachayachachic, The first god, creator of the three realms and their inhabitants, was also the father of Inti.

Many ancient Andean peoples traced their origins to ancestral deities. Multiple Ayllus could share similar ancestral origins. The Inca claimed descent from the Sun and the Moon, their Father and Mother. Many Ayllus claimed descent from early proto-humans that emerged from local sites in nature, called Pacarinas. The earliest ancestors of the Inca were known as Ayar, the first of which was Manco Capac or Ayar Manco. Inca mythology tells of his travels, in which he and the Ayar shaped and marked the land and introduced the cultivation of maize.

A prominent theme in Inca mythology is the duality of the Cosmos. The realms were separated into the upper and lower realms, the Hanan Pacha and the Ukhu Pacha and Hurin Pacha. Hanan Pacha, the upper world, consisted of the deities of the sun, moon, stars, rainbow, and lightning. Ukhu Pacha and Hurin Pacha were the realms of Pachamama, the earth mother, and the ancestors and heroes of the Inca or other Ayllus. Kay Pacha, the realm of the outer earth where humans resided, was viewed as an intermediary realm between Hanan Pacha and Ukhu Pacha. The realms were represented by the condor (upper world), puma (outer earth) and snake (inner earth).

Huacas were widespread around the Inca Empire. Huacas were deific entities that resided in natural objects such as mountains, boulders, streams, battle fields, other meeting places, and any type of place that was connected with past Incan rulers. Huacas could also be inanimate objects such as pottery that were believed to be vessels carrying deities. Spiritual leaders in a community would use prayer and offerings to communicate with a Huaca for advice or assistance. Human sacrifice was a part of Incan rituals. Priests presided over sacrifices, an essential part of many rituals and ceremonies. The majority of the sacrifices involved animals, such as llamas or guinea pigs. However, in times of disaster or at very sacred ceremonies, a woman or a child might be sacrificed to the gods. These people would be given Chicha, a thick beer made from fermented corn to drink in golden goblets while the priest sang songs of their virtue before they were strangled. The bodies of the sacrificed were then buried in a cocoon of fine textiles and surrounded by gold and silver statues, bags of corn and other offerings. The ancient Inca chose children as young as 6, but also as old as 15, “fattened them up” for a year and sent them on a sacrifice pilgrimage (“Inca Human Sacrifices”). The Incan people thought it was an honor to die for an offering. The Incas also used divination. They used it to inform people in the city of social events, predict battle outcomes, and ask for intervention.

The Inca were a deeply religious people. They feared that evil would come at any time. Sorcerors held positions in society as protectors from the spirits. They also believed in reincarnation, saving their nail clippings, hair cuttings and teeth in case the returning spirit needed them. The religious and societal center of Inca life was contained in the middle of the sprawling fortress known as Sacsahuaman. Here was located Cuzco, ‘The Naval of the World’ the home of the Inca Lord and site of the sacred Temple of the Sun. At such a place the immense wealth of the Inca was clear with gold and silver decorating every edifice. The secret of Inca wealth was the Mita. This was a labor program imposed upon every Inca by the Inca ruler. Since it only took about 65 days a year for a family to farm for its own needs, the rest of the time was devoted to working on Temple-owned fields, building bridges, roads, temples, and terraces, or extracting gold and silver from the mines. The work was controlled through chiefs of thousands, hundreds and tens.

Ancestor worship was a central part of Incan theology. The souls of the dead played a protective role in the lives of their descendants. The bodies of ancestors were mummified and entombed. Often they were buried with their most prized possessions, women, servants, weapons, and ornaments in addition to an abundance of food and Chicha. Some groups of Incas placed the deceased on a large carved stone where they were mourned before burial. In some areas, the dead were sewn into fresh llama-hide and kept at their family’s home. Descendants of the deceased would regularly visit the tombs of their loved ones in order to bring them food and precious goods. Mummies of dead rulers were the holiest Huacas in the empire. They were treated as if they were still alive: continuing to own the property they had when alive, eating with their descendants and each other, and enjoying important ceremonies. They were also considered to be oracles and were therefore consulted on a regular basis.

This information listed in this paper is just but a taste of the rich history of these people and their religion. After reading this, it is clear why they are such a fascinating people and why they have been studied for so many years