For hundreds of years, the Roman Empire faced many challenges from within and without. Rome was neighbored by more powerful states. The date of the rise and fall of Rome is debatable. Historians have also identified varied causes. Some believe that the fall of Rome marked the beginning of the middle Ages.

In 184 AD, a good emperor named Marcus Aurelius died. He was succeeded by his son Commodus, who led the treasury into bankruptcy. This was the beginning of chaos in Rome. In 192 AD, Commodus’ troops assassinated him. The armies of the empire also attacked each other as they differed on the ideal emperor. Because of these internal wars, repeated attacks by neighboring tribes were successful. Had they been united to fight their enemies, perhaps the Romans would be able to defend themselves. The institution of many emperors within a short span of years indicates the political instability and division that existed in Rome.[1] 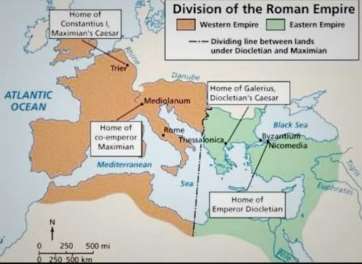 In 284 AD, General Diocletian became emperor. Some form of stability was restored during his reign. He divided the Roman Empire into two for easier governance, the Eastern and Western Empires. Each emperor had a junior co-emperor. The Empire was ruled by four emperors during this period, each ruler having his own territory. Diocletian secured the borders of the empire, increased the number of provinces and made the armies larger2.

Although Diocletian managed to bring some economic and political stability to the empire, imposing high taxation on the Romans caused them to lose faith in their rulers. The persecutions were also unfair to the Christians. The wars at the end of his reign undid the change he brought and were an expense to the empire.[2]

In 312 AD, Constantine became emperor in the East. He won several civil wars and later emerged as the ruler of the entire empire3 in 324 AD. He tried to reinforce Diocletian’s policies. He established Christianity as the official religion and caused the Christian persecutions to cease. As the Romans embraced Christianity, they began depending on religious leaders for guidance and did not recognize the authority of emperors. Constantine also created a capital for the empire in the East. As a result, the Eastern Empire thrived more than the West in culture and economic growth. Constantine died in 337AD.

Constantine’s favoring of the East made the Western Empire weaker. Poor economic growth results in inflation and inability to defend a region from external attacks.[3]

There was civil war until Theodosius I succeeded Constantine. In the late 300s AD, Germanic tribes began to invade the Roman Empire. They sought better living conditions and fled due to attacks by the Huns, warriors from central Asia4. In 378 AD, the Visigoths defeated the Romans at Adrianople. The Eastern Roman emperor, Valens, was killed. Theodosius defeated the Western ruler and became the emperor. To end the long-standing battles with the Visigoths,

Theodosius allowed them to live in the empire. He attempted to use Christianity to bring unity to the empire.[4]

Once the Roman Empire became a target for attacks, its fall was inevitable. Although the emperor tried to maintain peace, this was not lasting. The defeat at the battle demonstrated Rome’s weakness. 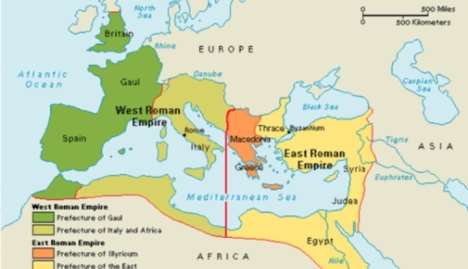 In 395 AD, after Theodosius’ death, the division of the Roman Empire became final. His sons, Arcadius and Honorius, ruled the East and West respectively. Honorius was nine years old and incompetent. He was guided by a talented general named Stilicho5. Arcadius was eighteen and had co-ruled the Eastern Empire ten years earlier with his father. They ruled each of their regions separately, marking the permanent split of the empire.

Placement of young men in positions of power weakened the leadership of the empire. The empire was also stronger when it existed as a unit. This split created a loophole for attacks.[5]

Although they lived in the Roman Empire, the Visigoths faced hostility, high taxation, and prejudice6. They failed to trust the new emperors and had recognized their weakness. In 410 AD, under the guidance of their leader Alaric, they attacked Rome. They destroyed massive properties owned by the Romans. In an attempt to intervene, Stilicho purposed to join forces with the Visigoths to defeat the Huns. He was beheaded when suspected to be a traitor.

The empire became extremely weakened by these attacks. By this time, it was only a matter of time before the empire fell. Fair treatment of the Visigoths might have prevented the attack.

AD476 The fall of the Emperor of Rome

Other groups continued to invade the empire. In 455 AD, a Germanic tribe known as the Vandals raided Rome. In 476 AD, the Western emperor Romulus Augustus was defeated by a German soldier named Odoacer6. Odoacer declared himself king, marking the end of the Western Roman Empire. The Eastern Roman Empire lasted another thousand years. With a barbarian as the ruler of the West, the initial identity of the Roman Empire was now destroyed. There were no means to rebuild the empire.

The rise of Christianity stands out as the main factor contributing to the end of the Roman Empire. When the empire started, Christianity was not recognized. When Constantine was emperor, he was actively involved in Christian policy-making. Theodosius made it a state religion during his reign. These emperors were seeking a means to unify the empire. This religion being monotheistic was very much unlike the traditional polytheistic Roman Religion. The change was drastic. Many resources were utilized in trying to enforce Christianity as a state religion.

Families gave their daughters away to become nuns. This caused a great population decline. The Christians refused to join the armies as rituals were involved routinely. They also freely gave a portion of their income to the church as part of their religious practices, causing a diversion of wealth. Christian persecutions added to the already existing internal conflicts in the empire. The strife made the Romans unable to tackle wars from external forces.

Church leaders became influential in the governance. They used prophetic books for guidance to leaders on how to succeed in wars. The Roman people began depending on these leaders for guidance instead of trained military and administrative leaders. The Romans had previously revered the emperors as gods. With the popularity of Christianity and belief in one God, the emperors were less influential.

The fall of Rome, however, was not caused by a single event. Such factors as the division of the empire into two, inflation, economic instability, and military problems also contributed. The multiple invasions weakened the military defenses and led to the eventual dethronement of the emperor.

4th September, 476 AD seems as the date Rome ceased to exist. This is when the Western Roman Emperor was dethroned and no one else was declared emperor.

Ferrill, Arther. The fall of the Roman Empire: The military explanation. London: Thames and Hudson, 1986.

Gibbon, Edward. History of the Decline and Fall of the Roman Empire Volume 2. Blue Unicorn Editions, 2001.

[2] Ferrill, Arther. The fall of the Roman Empire: The military explanation. London: Thames and Hudson, 1986.