Can you imagine life without these machines?

At the dawn of the 18th century, technological and scientific advancements led to England being one of the most powerful and successful maritime power in the world. Foreign trade had scaled new heights and the demand for manufactured goods had increased. As a result of the use of machinery for agriculture, there was not much work in the rural areas. People migrated to towns looking for opportunities for work. Manufacturers attempted to find ways to increase production to meet the new demands. All these factors, among others, led to what was later termed as ‘The Industrial Revolution’ by historian Arnold Tonybee.

Onset of the Industrial Revolution

Life before the Industrial Revolution was tough. For centuries, man had relied on animals and himself, to do all the work and make objects of daily use. With new technological advancements, man started to rely on technology to perform similar tasks – quickly and efficiently. This change from an agrarian economy where hand tools were used, to one, where machines such as the seed drill, steam engine, etc. were invented, factories were established, resulting in complete change in the life of the people is termed as the Industrial Revolution.

Features of the Industrial Revolution

One of the most important features of the Industrial Revolution was the various inventions made during the time that went on to change the course of history forever. Eli Whitney’s invention of the cotton gin helped separate the cotton from its seed approximately fifty times faster than before. Jethro Hull, a farmer, invented a seed drill which planted grains very efficiently. Increase in the production of raw material meant that there was loads of raw material to be processed, especially in the case of textiles such as cotton. A weaver named James Hargreaves gave the much needed breakthrough by inventing the spinning jenny, a machine that spun many threads at once, though they were thick. Richard Awkright, invented the spinning frame, also known as the water frame. It spun thicker thread into thinner and stronger ones. It was Samuel Crompton’s spinning mule that made the large scale production of yarn possible. Edmund Cartwright invented the power loom that further increased the production of cloth and reduced labour costs as well.

Inventions of machines led to the formation of factories for production of cloth. Mass production of cotton and cotton fabrics led to a great reduction in the prices. These inventions changed the socio-economic structure of England as weavers and workers were able to earn good wages and lead a better life.

Although the cotton mills marked the beginning of the Industrial revolution, it is the invention of James Watt’s steam engine that powered and continued it. The steam engine used the force of steam to power engines. Invention of this machine brought about many changes in England. Factory owners realised that they could now build factories where people lived and need not construct them it near a water source, as they did earlier. It was Abraham Darby’s ability to cast iron in a coke-fueled furnace that enabled inventors like Thomas Newcomen to have his steam engines cast by Darby[3]. Henry Bessemer’s invention of the Bessemer Converter enabled inexpensive manufacture of steel abundantly. The transportation system was completely overhauled when steam powered trains and other locomotives were built. The transformation of roads and railways made travel and shipping of goods fairly comfortable and cheap. [4] [5] [6] [7] [8] 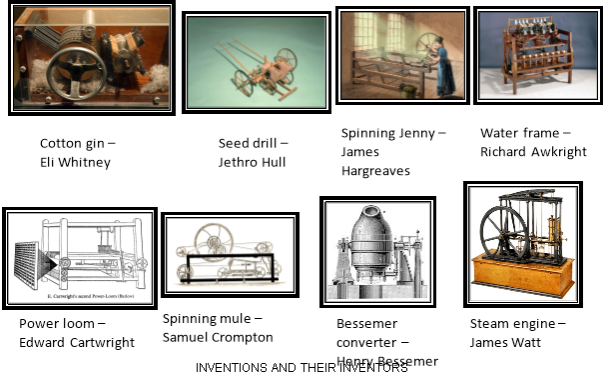 The invention of the steam engine, usage on iron and steel in ships was useful in manufacturing ships that were much faster. Ships started voyaging through oceans which in turn increased trade even further. This period of intense industrialisation witnessed a major change in architecture and infrastructure. New towns came up that boasted of town halls, libraries, gardens, concert halls, etc. [9]

Another important feature of the Industrial Revolution was the change in the socio-economic life of the people. As factories were set up and towns formed, people moved to towns in search of employment which made urbanization, a common feature of the Industrial Revolution. Historians are of the opinion that although some women stayed at home to look after the children, many worked in factories with their husbands. Sometimes, children were made to work in factories as well.

In general, the Industrial Revolution improved the standard of living of the people as they were able to afford the basic necessities of life and could indulge in leisure activities during their free time. People read books, went on vacation, enjoyed concerts or spent days on the beach, educated themselves, etc. to pass their time. People started to take an active part in politics as well. [10]

Why did the Industrial Revolution originate in England?

Having read about the different features of the Industrial Revolution, it now becomes imperative to read about certain conditions that came together to set the scene for its inception. Colonies like India were a good source of raw material such as cotton for their factories in England. The colonies were good markets too as they sold their manufactured goods there. Being a supreme maritime power with one of the largest ships in the world, it was easy for England to transport the raw material and the finished products. A stable government at the centre, with few restrictions on the economy, helped the industry and commerce to thrive. Laws made by the government favoured the companies that set up factories and businesses. Natural resources such as coal and iron were available in abundance to be used in factories. Streams and rivers in England were used to generate power and served as a medium of transportation of goods and raw materials. England, to begin with, was a prosperous country and people had extra money to spend on other things besides the basic needs of food, clothing and shelter.[11]

Impact of the Industrial Revolution

The Industrial Revolution became the most noteworthy ensemble of social, cultural and economic change that affected human history. Let us discuss some of them.

Though the Industrial Revolution began in England, it gradually spread to the other countries of the world as well.

Industrialisation stirred the aspirations of England. They wanted to maximise the profit of their industries. England wanted resources to fuel their production as well as a market to sell their goods. Weaker countries such as India were the perfect target. This policy of England to acquire political, economic and social control over a weaker country is known as imperialism. Imperialism was one of the worst impacts of industrialisation. England sourced the raw materials of their products from these countries and sold the manufactured products in these countries itself at exorbitant prices. Imperialism involves the use of power, military or otherwise to exercise control over the weaker country. [13]

Imperialism destroyed the culture and the local industries of the colonies. Inexpensive foreign goods destroyed the markets of local indigenous products. No effort was made to modernize the colonies. Agriculture was also affected as the imperialists allowed the colonies to grow those crops that were beneficial to them, whether or not it was conducive to the locals.

We shall study about the British policies and plans in India later in the book.

Peep into the Past 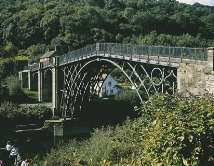 The World’s first Iron Bridge built on River Severnin England is one of the most famous industrial monuments in Britain. Shropshire, the area in which it was built was famous for its coal deposits. The steep Severn gorge posed a problem for transportation of people and goods. Architect Thomas Pritchard suggested ironmaster John Wilenson make the iron bridge. Though Wilkenson started the project in 1777, the iron bridge was completed by Abraham Darby in 1779. It was opened to the public on January 1, 1781. The bridge was used for over 150 years before it was shut down for vehicles in 1934. The Iron Bridge was designated as an ancient monument. It is now a World Heritage Site.