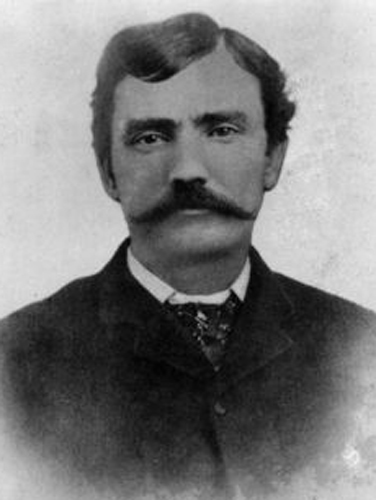 There are very few men in the world that are known for being a true American outlaw and gunslinger.  Gunfighters were known on cattle trails and in gambling halls to be cunning and not at all a good insurance risk.  There are also few men that had the privilege to call themselves a “lawman”.  Men of the law had to be just as clever to keep the people under their charge safe.    But there is one man of the American Wild West that could claim both titles and his name was John “King” Fisher.  This celebrated, quick-shooting outlaw began his legacy by breaking a few minor laws in his teens, then continued down a slippery slope of criminal activities that eventually led him full circle to become a lawman killed by outlaws.

John King Fisher was the oldest of two sons born to Jobe Fisher and Lucinda Warren in Collin County, Texas.  After the death of King’s mother in 1855, his father remarried and moved the family to Williamson County where King’s uncle lived.  His father’s new wife was a frail woman in poor health, so after a time, his father decided to move the family again; this time for Goliad County to be closer to the coast.  King’s father was in the cattle business and frequently operated freight wagons on the Gulf.  After the death of his second wife, he began to notice that his son, King, was starting to surround himself with people of the wrong crowd.  He decided to write a letter to a relative in Florence requesting that King go stay with them and attend school.  The relative accepted and King made the 150-mile trip by himself, on a sorrel mule (Fisher, 1960).

Young King was described as athletic, good-looking, and popular with the ladies.  He was good at fist-fighting, horseback riding, and broke wild horses in his spare time for extra money (Fisher, 1960).  Once, while riding horseback, he became tired and decided to stop to take a nap.  While he was sleeping, his pony broke loose, so upon waking King decided to borrow a stallion from a nearby pasture belonging to a man named Turnbow in an attempt to chase his own horse down.  Mr. Turnbow learned of the theft and decided to press charges against King making this his first brush with the law.  Ironically, after the authorities captured him, he escaped using a knife that Mr. Turnbow intentionally slipped him to cut the lead rope they used to apprehend him (Chaney, 2014).  King fled from the law back to Goliad.

In Goliad, he continued his downward spiral into a life of crime by surrounding himself with the same crowd that his father had initially tried to get him away from.  He was eventually arrested for burglary, found guilty, and sentenced to serve two years in the state penitentiary.  King was only 16 years old at the time, so he was released after only serving a few months in prison because he was so young.  Only months after his release, King aimed to become a cowboy and “plunged into the wild border country, following the big westward migration of Goliad people (Fisher, 1960).”  He established a ranch on Pendencia Creek in a region called “Nueces Strip” where cattle rustling was a large business.  Relying on intimidation, he quickly became known as one of the leaders on the Strip and his ranch became a sanctuary for criminals, rustlers, and drifters that came through the area.  He was so respected and feared that road signs near his ranch read “This is King Fisher’s road. Take the other (Chaney, 2014).”  King had created a sizable gang, having over a hundred men loyal to him and “King Fisher’s Territory.”

The border between Texas and Mexico was never wilder than it was in the 1870s.  Small settlements were found here and there, but the majority of the country was unfenced.  Using this fact to his advantage, King and his crew would frequently dash into Mexico, steal cattle and horses, then quickly return to his ranch.  On one occasion, he found several Mexicans attempting to remove a horse from his ranch that they claimed had belonged to them.  According to Major T. T. Teel, a criminal lawyer that frequently represented King in court, the Mexicans fired at King, “whereupon the King pounced like a panther upon his assailant, took the gun away from him, then killed all three of them with it (Fisher, 1960).”  He wore elaborate outfits like his famed tiger-skinned chaps and he carried a pair of silver-plated, ivory-handled six-shooters of which he had become deadly fast and accurate with either hand.  King was no man to mess with, and the public knew it.  He was arrested and brought to court on several charges many times but was acquitted either due to lack of evidence or lack of witnesses.  In 1877, King even said “You could not persuade a man in this whole county to testify against King Fisher or any of his clan (Chaney, 2014).”  He ruled the country between Eagle Pass and Castroville, Texas.

After living the life of a true outlaw for the majority of his adulthood, in 1876 he began to settle down and showed signs of reform.  He married Sarah Vivian, had four daughters and attempted to lead a somewhat more respectable life.  In 1881, after being accused of several murders, King was again acquitted and decided to become deputy to Sheriff Ben Boatright of Uvalde County, Texas (Bennett, 2011).  Though it was not in his nature to play second fiddle to anyone, he took the job with the understanding that he could be a candidate for sheriff after two years.  He wanted the top title.  To no surprise, he became extremely good at his new job.  However, no amount of personal redemption could stop the tragedy that would soon transpire.

While King was in Austin, Texas on business, he met with his friend Ben Thompson, a notorious gunfighter and avid drinker.  A few years before, Thompson was involved in the murder of Jack Harris, a local gambling hall and theatre owner of San Antonio’s famous “Fatal Corner” otherwise known as the Vaudeville Theater.  Fueled with alcohol, King and Thompson decided to take a train from Austin to San Antonio to catch a show at the Vaudeville on March 11, 1884.  Blinded by the rage of taking their revenge, former partners of the murdered theatre owner, Joe Foster and Billy Simms cornered King and Thompson inside the theater and brutally shot them down (Bennett, 2011).  Stories have varied of that night, but in G.R. Williamson’s book, “The Texas Pistoleers”, he claimed that gunfire erupted after Joe Foster’s refusal to shake Thompson’s hand while he was attempting to settle the matter of his previous discretions against his partner.  King Fisher was simply just in the wrong place at the wrong time, with the wrong gunslinger.  As is true among most gunfighters and outlaws, he did not live to see his 31st year.

Over his lifetime, John King Fisher was indicted of six murder charges and about 15 lesser counts but was never fully penalized or convicted.  His quick-shooting skills, bravery, and overall use of intimidation earned him the admiration of his henchmen and fear from his enemies.  Although he spent the majority of his life breaking the law, he attempted to redeem himself by upholding the law with future thoughts of becoming sheriff.  Regardless of what could be said of him, King Fisher lived a life of contrasts and is a genuine example of a man that lived and died in the action-packed stories and history of the 19th Century’s wild Texas frontier.