The Apprenticeship System was intended to provide a smooth transition for the ex-enslaved into freedom after Emancipation was declared. It also ensured an adequate supply of labour for Planters during the period it lasted.[1] The newly made Apprentices were separated into two groups: the Praedials who were to work 6 years in the fields and the Non-Praedials who were to work 4 years domestically.[2]Apprentices were supposed to learn new skills such as budgeting and saving. Planters on the other hand, were expected to introduce new technologies and get accustomed to paying wages. Special Magistrates were employed to make sure that the planters obeyed the laws and the ex-enslaved were protected. The system was implemented in British Guiana, Trinidad and Jamaica. However, Antigua and Bermuda did not implement it.[3]

The Apprenticeship System was not anything like what freedom should have felt like. Although it was supposed to be a transitional for many ex-enslaved it ended up being nothing more than a further period of bondage. At first they were happy in 1834 when Emancipation was granted, but later on they became confused and upset when they realised that their new ‘freedom’ came with terms and conditions to abide by just as if it were enslavement continued.

Apprentices did not understand this system which led to instances of protest. From time to time short strikes occurred and acts of sabotage just as during the enslavement period[4]. For example, in Jamaica. John Graskell of Mt.Sinai was found guilty of insubordination and attempting to get other apprentices to resist[5].These actions taken by the Apprentices showed that they were unhappy with the Apprenticeship system.

Even though the Apprentices were supposed to be paid for any additional hours of work other than the 40 Â½ hours they had to complete each week, Planters continued to frustrate them by tying wages to the rent of huts and they often took advantage of the Apprentices by making them work the extra hours for no pay as they knew that the Apprentices did not have the knowledge to calculate how long they worked and if they were getting paid accurately. Apprentices were in a weak position which did not enable them to bargain with Planters about the conditions of their employment.[6] Aside from this, Planters also punished the Apprentices by using one of the harshest punishments, ‘the treadmill’ which was carried out in workhouses.[7] The Apprentices were quite confused when they received these horrible punishments and faced these frustrations because they were supposed to be treated as free men and employees. This clearly did not happen.

Figure 1: Apprentices on the Treadmill 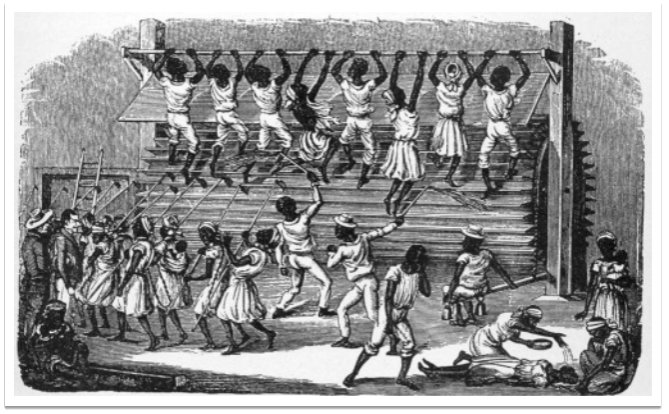 The whole idea of the Apprenticeship System was upsetting to planters, because their “properties” (the Africans) were granted their freedom. The planters were disgusted by the Apprentices and they did not view them as people who should be granted their freedom. Even though planters were compensated, this did not stop them from extracting as much labour as possible from the ex-enslaved before full freedom set in. They tried to exercise their usual power over the now freed people. This was especially done as they had the right to decide if an apprentice’s work was satisfactory or not. Even though the Emancipation Act forbade physical punishment on the plantation, it ordered each colony to set up workhouses[8] to carry out punishments there. The workhouses were dominantly controlled by the planters nonetheless.

When planters discovered that apprentices would sell produce from their provision grounds or work on other properties for income, they tried to stop it by all means. If the Apprentices were making their own money they would forfeit this control that the Planters had and the Planters did not want this. They started giving Apprentices poor quality provision grounds closer to their plantation or in the case of an Apprentice always having their own provision ground the planters made it difficult for them by cutting down fruit trees or forbidding apprentices to have livestock.[9] Planters also refused to pay fair wages after the 40 Â½ hours, or pay the wages on time. The vagueness of the Act allowed the Plantation Owners to manipulate the terms and conditions to their benefit and made the Apprentices suffer.

The Colonial Office attempted to see that the Apprenticeship System was being carried out fairly so they sent Special Magistrates to the Caribbean. They were supposed to protect the rights of the former enslaved and settle disputes between employers and labourers. Many of the Magistrates were either retired British army officials or were civil servants.[10]

However, the ratio of Special Magistrates to Apprentices was small, therefore this left the Magistrates with a lot on their hands. Their job was extremely exhausting as they had no money and worked under poor conditions.

A Special Magistrate’s salary was insufficient and they still had to provide their own housing, food and travelling expenses[11]. As a result of this, many Magistrates were forced to take bribes from Planters such as accepting meals and lodgings, often the night before a Magistrate had to listen to an apprentice’s complaint against a planter. This was not fair to the Apprentices as the Magistrate’s opinions were bias and they were automatically on the side of the planter. Even if there were Magistrates who wanted to help they could not as they did not have the resources to do so.

Fortunately, there were still a few Magistrates who carried out their jobs well and went out of their way to help apprentices and investigating their complaints, often risking their lives. For example, John Bowen Colthurst,Captain James Grady, William Oldery and William Ramsey.[12] According to historian, W L Burn, a ‘good’ magistrate was one who: “â€¦ tolerated neither undue laziness on the part of apprentices nor undue severity on the part of the masters; kept their districts in order, tried to work with the governor and (while courting neither the favour of the planter nor that of the ‘negrophilists’).”[13]

The Apprenticeship System failed as it was plagued by poor labour relations as Planters intended to keep their traditional power and racial dominance over the Apprentices. It also failed as a British Parliamentary Committee recommended that workhouses be taken away from local magistrates due to evidence reports sent by the Special Magistrates in 1837.[14] The planters had mixed reactions to the ending of the system. Some still wanted the system to run its full course while others wanted it to end mainly because they no longer wanted to have the expenses of providing for the Apprentices. As expected, the Apprentices were quite happy that the system was ended. On August 1 1838, laws were passed to prematurely end it[15]. At the end of Apprenticeship everyone was freed wether they were a praedial or non-praedial.

Figure 2 : A gathering for the listening of the Governor reading the proclamation of the end of the Apprenticeship in the Spanish Town main square, Jamaica, 1838 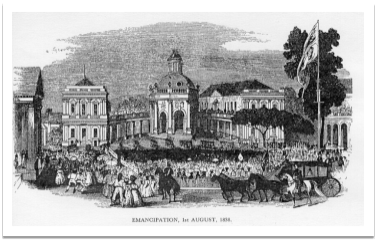 [8] Extracts from the journal of a special magistrate in Barbados showed how the workhouse was used to control apprentices who worked less hard than the overseer demanded or who challenged a planter.

[11] The initial salary of a Special Magistrate was £300 but this was seen as inadequate and it was then moved up to £450.