Introduction: In this essay, an analysis of what is modern, is an inquiry to a broad movement which birthed many Avant Garde styles; and put “-ism” in Modernism beginning with Impressionism movement, French/ German Expressionism, Fauvism, Surrealism, and Abstract Expressionism to name few. Every movement questioned what is art, and what is Avant Garde, and as Butler suggests, “what is going on“? (p14). This cauldron of contemporaneousness overflowed into the early 20th century and beyond.

Modernism Background: Modernism is an all-encompassing term of any art movements since the late 19th century that forever changed the history of the arts through the 20th century. The changes came about from philosophical views, propaganda, and criticism; widely influencing, more specifically, artists. In the late 19th century, a cultural revolution, and revolt to traditional École des Beaux Arts, in Paris France, where Henri Matisse would hold professorship position. The academy of formal arts had been negating art and artist in the late 1860’s. The French Royal Academy, and the bourgeois class rejected art and artists subjectively because their style (pure abstraction) it was non-conforming to formalist conventions and hierarchy of realism. The school’s system and hierarchy of categorizing placed historical paintings at the top, and oil paint as the medium of choice, but pure abstract painting was not acceptable at the academy.

It was Gustave Courbet, in 1884, who did not accept rejection. Gustave Courbet (1819-1877), and Edouard Manet (1832-83) who paved the way for Modern art. However, this rejection birthed what Charles Baudelaire called, “Avant Garde”.Â  Initially, with an exhibit known as the “Salon des Refusés” of 1863.

Norman Cantor (1929-2004) In its earliest tendencies, modernist art began the reductive process of Realism to Abstraction otherwise considered a cultural revolution and rise in consciousness pre-modernism are:Â  Reformation, Enlightenment, and Romanticism (M1_Session 3).Â  Cantor is responsible for establishing and defining the characteristics of Modernism:

” Being anti historicist; taking a microcosmic view of things; self-referential; prefers to depict, or explore the non-ideal; embraces the aesthetic of fragmentation; recognizes the randomness found in the world; strongly functionalist and concerned with “techne”; recognizes the interactive nature of things; Elitist; new openness toward sexuality; fearlessly considers the issues of mass culture; tends towards moral relativism; embraces the very Nietzschean nation that humanity is most authentic when engaged in the arts; pessimistic vitality, and lastly Modernism is opening to pluralism, and multicultural influences.” (M1_Session 6).

Friedrich Wilhelm Nietzsche (1844-1900): was a German philologist, poet, cultural critic and philosopher, and Latin and Greek scholar whose profound influence impacted Western philosophy, and its modern history. Nietzsche, had a difficult time growing up, and was frequently plagued with family and health problems. In 1864, he attended the University of Bonn where he met his friend Ritschl, and later, Nietzsche followed him to Leipzig University. It was in Leipzig where his views of religion would never be the same (Nietzche vii). With his rearing, and health issues (of madness) and new perspective on religion was foreshadowing to his world view, and

some of his greatest philosophical polemics on Western Culture such as reason, and truth, morality Nihilism and Apollonian and Dionysian; he was after all considered a “mad man”.

The first movement of the twentieth century, is Fauvism and it intention was to project a subjective epiphanic and important experience (Butler p15). Meaning this is the ‘new’ and now in art. In the early twentieth century was a period philosophers like Kant, Marx and Nietzsche, and the psychology Sigmund Freud where contributing influences which propagated an emergence of genres within the “modern” umbrella. In Christopher Butlers book, “Modernism: A Very Short Introduction”, clearly suggests, “â€¦and we shall see, ‘epiphanic’ ways of coming to the truthâ€¦”(Butler p 15). In this statement Butler, affirms the subjectivity pertaining to consciousness, in that art too is subject to, its influences of criticism and philosophical ideals based on truth. 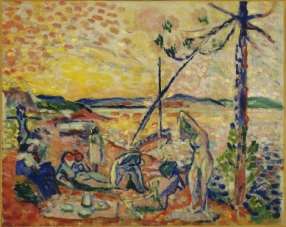 Later, in the 20th century is the French Fauvist, Henri Matisse (1869-1954) is best known for pure expressive color and exaggerated forms to ‘express’ emotion, emotive brushstroke cemented Matisse as Avant Garde artist in the early 20th century. In his painting Luxe, Calme et Volupté, 19041.This painting is a departure from Neo Impressionism that sets the stage for the Fauves movement as coined by Louis Vauxcelles. Per Dempsey, “with its bright palette and subjective, emancipated use of colour, it creates an atmosphere and decorative surface” (66). 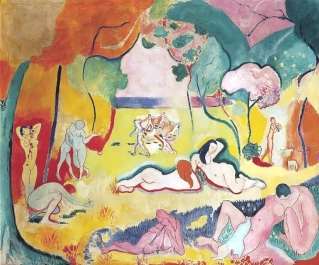 Meaning that by “subjective” Matisse’s colors and style is self -referential according to Cantor characteristics of Modernism, and is further reductive of humanism and more Apollonian way of life, the presumptive mask of calmness. Another example of Apollonian system is his painting, “Joy of Life (Bonheur de vivre: Joie de vivre)”,1905-06.2 The scene depicts the figure in a leisurely and gestural quality, engaged in exhibitionist sensuality; a new embrace of sexuality. The color palette is pure and complementary, mostly middle value.

Next, Matisse’s European counterparts, the German Expressionists are Die Brücke (1905) and Der Blaue Reiter (1911). The German Expressionist where inspired and heavily influenced, by their native compatriot Friedrich Nietzsche, whose Nihilism, and the Apollonian and Dionysian philosophies characterized a darker view on humanism, truth, and the mask of the personae. Nietzsche believed that was modernity was lacking spirituality, and it’s all and empty façade, and materialistic (immoral) and heretic, and his method was “philosophizing with a hammer” metaphorically to reveal the emptiness, and lack of humanistic substance (Delevati). Bold colors, dark lines, and angular lines was another reductive method of realism.