Realities and Maori Models of Health

New Zealanders has major ethnicities than any other parts of the world, comprising over 213 ethnic groups. Five major ethnic groups in New Zealand comprise New Zealand European, Maori, Chinese, Samoan and Indian (NZ Herald, 2013). And of all ethnic groups, Maori has been documented as having the poorest health status in New Zealand even after the regulation of factors like income, residence and education. This health status is the result from their negative experiences from colonization processes that resulted in the loss of their cultural beliefs, practices and even their Maori language. As Ramsden, Irihapiti has stated:

Maori have until recently been passive consumers of a health service that they have had little input into. As yet Maori have little control over funding, policy and delivery of health service in the State sector.

Many Maori would argue that this situation is in contravention of the promise of the second article to protect the “unqualified exercise of Maori chieftainship…over lands, villages, and all their treasures”. [1]

Tino rangatiratanga guarantee has not been realised while Maori cannot gain autonomy in health service and become accountable to Maori.[2]

The Ministry of Health documents [3]has revealed the seriousness of the matter and the need to address the inequalities and disparities of health as what Hon. Annette King has stated:

The Government has acknowledged the importance of prioritizing Maori health gain and development by identifying a need to reduce and eventually eliminate health inequalities that negatively affect Maori.[4]

As health care providers, it is our utmost responsibility to respond to Maori’s health issues in respect to the diversity of worldviews that may exist in between us. To fully understand Maori health promotion, it is best to examine these key models that have been developed and currently used.

Maori view health in a holistic way. Each of these models is interlinked and highlights the links in between the physical, spiritual, individual and most importantly, the family.

This model expresses the relevance of balance that if one of these elements fails can lead to illness. It was developed by Mason Durie in 1982 because the spiritual element of health was discarded which has become an important in the prevailing health models.

This model brings together the elements of modern Maori health promotion. These key elements highlight the linkages in between Mauriora (cultural identity), Waiora (physical environment), Toiora (healthy lifestyles) and Te Oranga (Participation in society). The two pointers symbolize NgÄ Manukura(community leadership) andTe Mana Whakahaere(autonomy) which depicts the resources needed to achieve those outcomes. It has been currently used around New Zealand to create a positive change regardless of ethnicities or culture.

Te Wheke or the octopus depicts family health. The octopus head represent te whanau (the family), octopus eyes as waiora (family and individual’s total well-being) and the tentacles representing specific dimension of health which are interwoven representing closeness of these tentacles. Maori acknowledges importance of interconnectedness in between the mind, spirit, whanau and physical and has always been even after the introduction of Western medicine. 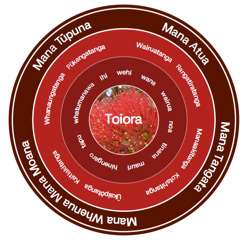 This model has been developed to ensure the traditional tangata whenua (people of the land) values, knowledge and institutions are recognized as key indicators of toiora: optimum health and well-being. It attempts to make a wider connection between wider health and social determinants like housing, employment, education, resources and language. This model is now being applied in the Bay of Plenty District Health Board.

All of these models will help shed light on Maori’s views of health and well-being in the hope of greater appreciation to them and be put into works by the professionals working in the health sector.

Loosely translated as “hospitality”, manaakitanga plays an integral part in Maori society. It is derived from the word “mana” or the person’s ability to care. It derives respect that is earned and cannot be forced to any individual. Being hospitable, looking after visitors and caring for them regardless of their status is of great importance to them. But manaakitanga has a much broader definition than just a word or direct translation. It can be broken down into 3 parts: mana-a-ki which means “power of the word” which motions them to be expressive and articulate in welcoming visitors. There is another explanation with the words “mana” or prestige, “ki te tangata” or to the people – which gives the importance of mana that contains the integrity, prestige and power of guests. Manaakitanga not only encompasses hospitality but also on mutual respect. It acknowledges others’ mana as having equal or greater than their own which can be seen in the form of love, generosity, as well as hospitality. They also believed that in any gathering, small than it may seem, it should be remembered with gratitude and affection. They welcome settlers with open arms as they often trade and give foods to them. Some of them brought individuals into their marae or meeting place where they become members of whanau/family, hapu/sub-tribe and iwi/tribe.

Manaakitanga, in short sense, is about cultivating relationships, looking after one another and being careful as to how others are treated regardless of their status in the society. It is applicable not only to the Maori but also in any ethnic group. In any health care setting, it is important that we all treat each other with respect. It can boost one’s esteem knowing you are valued. In this way will we be able to build rapport and partnership not only to the patients but as well as their families, thereby, improve the health status of not only the Maori but also to the entire ethnic group.

Nursing Council of New Zealand. (2002, March). Guidelines for Cultural Safety, the Treaty of Waitangi, and Maori health in Nursing and Midwifery Education and Practice. Retrieved from http://www.sportsouthland.co.nz/files/docs/culturalsafety nurses.pdf