NCDs are a group of non-infectious diseases that progress slowly from their onset and prevail for longer duration. The four main NCDs responsible for world-wide deaths are cardiovascular diseases (CVDs), Cancer, Chronic respiratory diseases and diabetes. According to the “World Health Organization (WHO) global statistics report”, more than 36 million deaths have been recorded in the year 2008 because of NCDs. These deaths can be prevented by reducing the risk factors such as tobacco and alcohol consumption, healthy diet with moderate to vigorous physical activity. The four major NCDs combined together are responsible for 84% of death in 2008 globally.

This assignment deals with CVDs, their prevalence in Australia and the population approaches that the country has taken towards prevention and control of CVDs. This assignment also deals with the future strategies that can be followed to further decrease the prevalence of CVDS.

CVDs are associated with heart and blood vessels related to the heart. The most common NCD prevalent in Australia are Coronary Heart disease, Myocardial Infarction, Heart failure and Stroke. According to WHO, CVDs has become the major cause of death estimating about 17 million deaths worldwide in the year 2008 and are a major contributor towards global economic burden.

Even though Australia is a high income country, it is also affected because of NCD’s with 35% cardiovascular disease death rate in 2008. 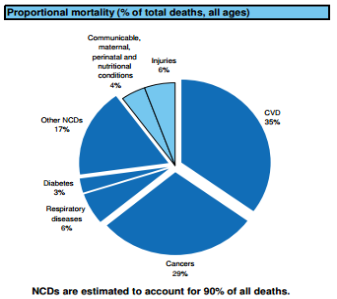 CVDs ranks first in causing death and disability responsible for nearly 17% of disease burden in 2003. In 2008, more than 50,000 deaths have been recorded because of CVD. There is a strong linkage between CVD and other NCDs such as diabetes and chronic kidney disease (CKD) due to their common risk factors which is also a major reason for the increase in death.

Even though the mortality rates have declined over the past 20 years, CVDs are a continuous threat to the Australian population. In 2011, a death estimation of 31% was recorded which clearly denotes a decrease in death rate when compared to the 2008 death estimates of over 35%. CVDs are expensive to treat. Over $5.9 billion were spent on CVDs from total healthcare expenditure in 2004-2005. This accounts for 11% of total healthcare expenditure. Even though death rates are decreased, 482,000 hospitalizations were recorded in 2009/10 and 12% increase in hospitalization is seen from 1999 to 2010.

CVDs prevalence increases with an increase in age. This increase is due to hospitalisation care for elderly and their improved life expectancy. After hospitalization and onset of CVDs, a decline in people’s life quality occurs. Long term cardiovascular diseases are reported in 35% of people between the ages 55-64 while 64% are reported in case of individuals above 75 years.

The modifiable risk factors can be controlled by changing the behavioural pattern such as increased physical activity, reduction in tobacco and alcohol consumption and healthy dietary pattern. This change decreases the occurrence of CVD in all populations.

Physical activity (PA) differs with age. There is a 57% rise in physical activity in individuals aged above 75 yrs and a reduced physical activity of 27% is recorded in 15-20 year individuals. This is due to obesity, low socio-economic status and education. 4.4% of participants from a study conducted on 2,298 Australian resulted in obesity being the reason for physical inactivity. Poor health, lack of knowledge and skills, time and use of private vehicles serve as individual factors for less PA. Low socio-economic population have reduced access to supportive environments because of high cost entry fees.

A diet with high fat, dairy products and high salt causes CVDs. Data from National Health Service (NHS) of Australia for the year 2007-08 reported that 46% of Australian population consumed whole fat milk, 49% consumed skimmed milk and the remaining 5% fell under no milk consumption category. Diet rich in fibre, fresh fruits, and vegetables are recommended as healthy dietary pattern. Diet with high fruits and vegetables are recorded as age increases. 65.7% the Australian population aged 15-24 consume low fruits while only 34.6% the population aged 75 and above consume inadequate fruits.

NHS reports that a decreasing trend is seen in the consumption of healthy diet in all Australian populations from 2004. This decline in healthy diet is due to socio-economic status, ethnicity and place of living. 54% of low socio-economic individuals consume inadequate fruits compared to 47% of the individuals with high economic status due to cost. In case of welfare dependent families, a healthy diet consumes about 40% of their total income which is also a reason for increase in unhealthy diet in Australia. Based on ethnicity, 71% of indigenous population consumed low fruits compared to Australians.

Increased tobacco use is a major factor for CVDs prevalence due to the presence of toxic substance called nicotine and cadmium. According to Australian Institute of Health and Welfare (AIHW), the percentage of tobacco consumption has been reduced in Australia from 1994 to 2007 from 29% to 19% in the age group above 14 years. It has been reported that the percentages of individuals who smoke daily were 26% in 1993 which reduced to 17% in 2003 and 16% in 2007. This decrease in smoking trend from 1980 till present is because of smoke-free environment, occupational status, increase in price of tobacco, banning the promotion of tobacco sale and restriction of tobacco availability based on age factor.

Excessive alcohol consumption contributes towards occurrence of CVDs. High level of alcohol intake increases blood pressure, blood triglycerides and cholesterol thus increasing the chances of cardiovascular occurrences. According to National Drug Strategy Household Survey 2010, a decrease in alcohol consumption from 8.1% to 7.2% is seen from 2007 to 2010. More than 26,000 individuals above 12 years participated in the National Drug Strategy Household Survey and their knowledge, alcohol and drug consumption histories and related behaviours were recorded. According to 2011-12 estimates, more than 29% adult males and 10% females have had more than two standards drink fixed by National Health and Medical Research Council.

Unhealthy diet, increased alcohol consumption, smoking and physical inactivity are not only responsible for the prevalence of cardiovascular diseases but also for the burden caused by other non-communicable diseases. The Australian government along with non-government organizations created population-level prevention strategies to reduce the risk factors which reduce the country’s NCDs burden.

Based on WHO 2005, the following population-level strategies are followed in Australia to reduce the prevalence of the risk factors.

Since 1980’s, significant improvement in public health can be seen through awareness programmes, laws and regulations. Evidence proves that promotion of tobacco encourages adolescent population to uptake smoking. So, Tobacco prohibition Act, 1992 was passed to ban any forms of advertisement. According to Quit Victoria 2008, sponsorship by tobacco companies is also banned in return for any type of publicity. From 2006, 30% of the front and 90% of the back of cigarette packets are filled with health warnings. Smoke free environment have been present in Australia from 1986. All the Australian states have smoke-free hospital campus and vehicles. With time and place restriction to smoke, decrease in amount of smokers and passive smokers have been recorded. Presence of tobacco outlets near schools has been prohibited. Laws have been passes in all the states and territories of Australia prohibiting the sale of tobacco and cigarettes to individuals less than 18 years of age.

Taxation on tobacco products was introduced in 1901 and was revised between 1993 and 1995. Based on consumer index, an increase in taxation prevails. This taxation reduced the tobacco purchase among adolescents, also increasing the government revenue. Awareness and campaigns resulted in a change in attitude among Australian smokers with a significant decrease in smoking prevalence.

Excessive alcohol consumption on a single occasion alters the triglyceride and cholesterol level in blood resulting in intoxication. The National Alcohol strategy, 2006-09 aimed at reducing harmful effects of alcohol consumption. The National binge drinking strategy-2008 existed to reduce alcohol intoxication among young Australians aged below 25 years through campaigns and supplying grants. Every state in Australia has separate alcohol control strategy according to which alcohol is a legal drug with restrictions on its manufacture, supply, promotion and consumption. Alcohol licensing laws were established which restricts the trading hours, quantity and premises. These have been successful by reducing the hospitalization, crime and injury with public involvement.

The “Healthy Weight” is an Australian government managed website on how to maintain a healthy lifestyle. “Get set 4 Life – Habits for Healthy Kids” targets physical activity and healthy eating among 4 year old kids.

Even though 35% mortality is seen because of CVDs, the possibility of reducing it even more in Australia is challenging since a progress to control CVDs has already been achieved. Measurement data’s such as incidences for the risk factors are important to prevent future cardiovascular mortality rates. Currently, limited data exists regarding CVDs. Most of the data’s are from the AusDiab cohort studies. Further studies should exist to measure incidence as well as to determine the efficiency of prevailing population level strategies. The impact of these prevention strategies on health outcomes are also to be measured. Clinical guidelines are present to monitor the CVDs events (NHMRC, 2005) but extra studies are required to find whether the guidelines are active in all states. International guidelines from other countries (example, National Institute for Health and Clinical Excellence in United Kingdom) can be useful. It is necessary to concentrate more on the social and environment factors as well as in-depth analysis to verify the success rate of population-level initiatives. WHOs targets for control of NCDs and the likelihood of these targets happening in Australia include:

This is possible by preventing the premature deaths through the control of risk factors. By 2018, the Australian government also aims at increasing the life expectancy in indigenous children population under 5 years.

From the 2010 National Drug Strategy Survey, 15.1% of individuals aged 14 years and above smoke daily. By this target, a daily smoking percentage of 10.6% can be achieved.

This is hard to achieve since it requires laws and legislation to completely eliminate trans-fat. Instead of a total elimination, reduction in usage of fatty acids in foods can be achieved.

Australia has already achieved a target to reduce the burden caused by NCDs. Considering the present situation, it is possible to reduce the risk factors rather than eliminating them completely. The above mentioned targets along with effective medication and lifestyle changes successfully will reduce the current prevalence of risk factors and NCDs burden in Australia.