The study consists in a research approach method which is characterized by describing the case of an event and its implications. There are several types of case studies, but here is one exploratory case study in order to create a better conceptual definition and understanding of the cure of Dutch Disease.

This analysis was organized into three chronological poles, as advocated by Bardin (2004): pre-analysis, material exploration and treatment of results, inference and interpretation. The first phase is characterized as the organizational phase and has three missions: “the choice of documents to be submitted to analysis, the formulation of hypotheses and objectives and the development of indicators to substantiate the final interpretation.” (Bardin, 2004 p.89).

Finally, it was done the treatment and interpretation of the results obtained, in which “the raw results are treated in order to be meaningful and valid.” (Bardin, 2004, p.95). Thus found significant results that indicate how to neutralize the Dutch in Nigeria, as proposed for the work. Bardin (2004) points out, however, that the results obtained may have a different outcome to the goal initially presented, serving as a basis for further analysis arranged around new theoretical dimensions, or practiced thanks to different techniques. Finally, a conclusion is made about the Dutch Disease by the authors of this work, assessing all the information collected and selected.

Norway for decades was the poorest country of the Scandinavian region. However, in the recent economic history the country has been distinguished from the others presenting higher GDP growth compared to the rest of Europe and other developed countries such as United States, as presented in the graph below. This turn of events is conventionally attributed to Norway’s oil discovery in 1969 and subsequent extraction from 1971. In 2012, the petroleum sector represented more than 23 per cent of the country’s total value creation. The revenues from the petroleum sector constitute 30 percent of the state revenues. Today Norway is the 7th largest exporter of oil and the 3rd largest producer of gas in the world. With per capita GDP around $100,000, the Norwegian lifestyle has become such that the work week averages less than 33 hours, one of the lowest in the world, and while unemployment is low, there is large underemployment, made possible by benefits. 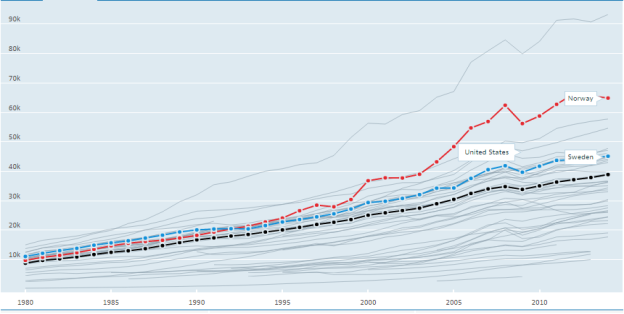 However, it is insufficient in explaining the Norwegian economic growth pointing to oil revenues as it was previously explained in detail about the negative relationship between resource wealth and wealth caused by the economic illness of Dutch Disease. In fact, Norway have managed successfully its oil wealth and avoided falling into trap of natural curse.

Larsen (2004) explains the change in the speed of growth in the decade after starting the exploration of oil was consistent with symptoms of Dutch Disease, however, continued growing over the two subsequent decades. This is an evidence of an escape from Resource Curse; thus, Norway did not experience retardation from mid-70s to mid-90s. Mehlum, Moene and Torvik (2006) pointed to Norway and other few countries as the only ones that were able to counteract the resource curse and the rent-seeking activities that are usually associated with it.

In 1996 the Norwegian government signed the Petroleum Act which constitutes the legal basis for the regulation of petroleum sector. In principle, it stated the rent from oil and gas belongs to the Norwegian people through their government. Gylfason (2001) describes that as the Norwegian government has high interest in controlling the oil sector, has decided to expropriate the oil and gas rent through taxes and fees. The State awards a small fee to domestic and foreign oil companies and receives roughly 40 percent of all produced through direct partnership with licensees, taxes and fees that corresponded to about 80 of the resource rent since 1980.

Bresser-Pereira (2008) in its paper about a Ricardian approach of Dutch Disease describes that the severity of the natural curse varies according to the difference between the exchange rate equilibrium of the “market rate” and the “industrial rate”. The author points to the management of exchange rate through export tax on the commodities as the principal instrument for neutralization of Dutch Disease. Furthermore, the author argues that the resources from tax created to neutralize the natural curse should not be invested in the country but in international fund; therefore, the inflow of resources does not entail the revaluation of the local currency.

Gylfason (2001) also describes the oil revenues are deposited in the Norwegian Petroleum Fund allowed to invest only in foreign securities for the benefit of the current and future Norwegians generations. Only the real rate return of these assets is transferred to the annual State budget, according to the fiscal guideline, the government deficit cannot exceed 4 percent of the assets. This is also important to shield the domestic economy from mismanagement, waste and overinvestment. Larsen (2004) defines this shield important because protects the economy from excessive demand and real appreciation when at full capacity, therefore, reduce loss of competitiveness. It is also beneficial when it is not at full capacity to allow some increases in aggregate demand.

Fosu (2012) described the two functions of this fund. The first is to secure that oil windfall is not consumed, but converted into financial wealth. The second is to separate these revenues from the domestic spending that would not vary according to the oil price fluctuation (fiscal policy). The idea is to have a stable spending of the oil revenues without interfere in the industry sector structure. Additionally, it helps to shield the non-oil economy from shocks in the oil sector, which can put pressure on the exchange rate.

Brahmbhatt, Canuto, and Vostroknutova (2010) discuss solutions for solving the natural resource issue. They argue that fiscal policy is the most important instrument because can make the increase in wealth permanent as the same time as it can constrain the spending effect to reduce volatility. Spending policies toward tradable sector (including imports) and general policies toward improving productivity of private firms help to reduce the negative impacts. Additionally, the government can encourage demand for imports to reduce demand pressure on the non-tradable sector while mitigates pressure on exchange rate appreciation and other adverse effects of natural resource windfall.

In the case of Norway we can see in graph below the country has stimulated improvements in the manufacturing sector that has increased its participation in the economy by 5% of GDP while the energy sector has fallen about 10 percent and non-tradable sector remained stable. We can infer that has an effort from the government to push the manufacturing sector through investment in education, business regulations, or reducing trade barriers and bureaucracy. Brahmbhatt et al. (2010) describes that these reforms have the aim of promoting foreign direct investment and create conditions for learning by doing. 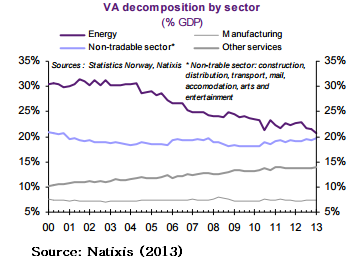 The exchange rate is impacted by the size of the non-oil budget deficit, or spending revenues as illustrated by Aamodt (2014). In short term oil and gas companies purchases NOK and the Norges Bank’s exchange transactions have influence on the krone exchange rate. Conversely, in long term is the size of non-oil deficit that affects the Norway’s exchange rate. The revenues from oil do not have an impact by the fact that all government revenues from oil are accrued directly in foreign currency. But the government appreciates NOK when sells foreign currency to buy NOK in an amount equivalent to the budget deficit. In other words the breakdown of the government’s net cash flow from oil sector into foreign exchange revenues resulting from oil and gas companies has no influence on the krone exchange rate.

With the Petroleum Fund the government isolates the effects of oil shocks and the oil price fluctuations on Norwegian economy because the entry of money into the economy is controlled and planned according to the need of the country. The State can make long term plan regarded to its domestic spending and; consequently; maintain the krone exchange rate and inflation stable even when the oil demand decreases.

Other factors were important to neutralize the resource curse in Norway as stated by Gylfason (2001). The author explains that Norway has a centralized wage formation system to limit general wage increases at the magnitude of productivity increases in manufacturing sector. This is possible because the trade unions are large coalitions of employers and employees that are able to consider aggregate interests instead of special ones. Additionally, both parts use a neutral agency to compute productivity increases in the manufacturing sector, institutionalize this information as ceilings of general wage increases. Therefore; the country’s centralized wage negotiation system contributes to prevent fast appreciation of salaries in different sectors.

Larsen (2004) argues that income coordination is important as the public sector limited wage increases to the productivity growth in the internationally competing industrial sector. In other words, this income coordination neutralized the impact of externality in the manufacturing sector avoiding high inequalities between tradable sector and resource sector. This is an important factor for the neutralization of Dutch Disease as reduces the labor shift between the two sectors. The graph below shows the wage evolution in Norway since 2002 in which we can see that gap between oil sector and the others never exceeded 2 per cent in this period. 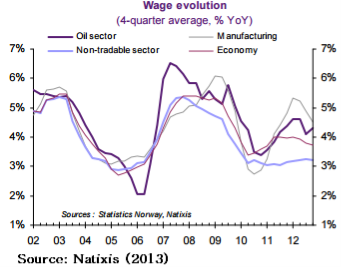 Institutional quality is considered by Mehlum et al. (2006) as an important element to reduce the effects of Dutch Disease as natural resource abundance stimulates the shift from production rent-seeking to the activities related to resource extraction. The authors associate the lack of natural curse with the existence of efficient, bureaucratic and transparent government. They presented a model in which shows the negative effect of resource abundance on growth vanishes in countries with high institutional quality like Norway.

The quality of institutions is also related to the corruption perception index as a measure of rent-seeking. Gylfason (2001) found a relation between natural resources wealth and increase in corruption and; consequently; decrease the per capita growth. In Norway’s case, the author showed that since oil was discovered, the corruption has declined and country’s GDP growth was stable during the last three decades. The graphs below shows Norway keeps a high level of freedom of corruption placed between 10 less corrupted countries of the world while economic growth spurted since the oil descovery, especially after 2000. 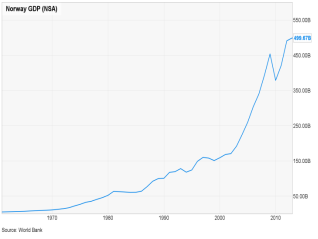 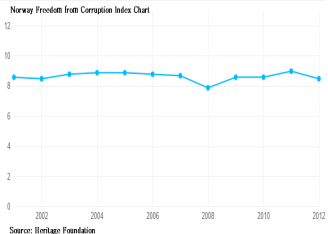 Finally, the public expenditure on education in Norway did not decrease after oil descovery. According to OECD, Norway has an incredible 100% literacy rate and is third country which invests more in education, what proves the government decisions are not oriented to favor natural resource extraction instead of other tradable goods production. Gylfason (2000, p. 4) in its studies about the correlation between natural resources, education and economic development showed that countries with natural resources wealth invest less in education and; consequently; has a poor economic performance. Nevertheless, the author mentions that Norway is one of the few exceptions: “The Norwegians show no signs of neglecting education, on the contrary, as the proportion of each cohort attending colleges and universities in Norway rose from 26 percent in 1980 to 62% in 1997”.