Wheat is one of the most important crops in Australian agriculture and a stable food for over half the world’s population. Australia produces over 25 million tonnes which accounts to approximately 3-4% of the world wheat production and 10-15% of global exports (Australian Export Grains Innovation Centre). Over 60% of Australian grown wheat is exported each year with Western Australia being the major contributor (Australian Export Grains Innovation Centre) The Australia wheat industry product and performance meets high standards for international consumer resulting in high income for example in 2003 the wheat industry grossed over $5.6 billion (The Australian Wheat Industry). The major export markets are Asian and middle eastern regions (Indonesia, Japans and Vietnam) where is it used for breads, cereals noodles and other stable foods (Wheat 2017)

Wheat has adapted to a wide range of soil types, but typically has the highest yield on well drained soils that have sub-surface soil pH of 45 and above (Wheat 2017) however different varieties are able to tolerate different levels of toxicity. Adequate amounts of rainfall are necessary during the sowing and throughout the growing season as this is the main contributing water source. Irrigation can also be used to supplement lack of rainfall. The growth and development of wheat is a complex process. Wheat seeds need to reach approximately 35% moisture and 97% humidity to begin germination. Temperature also influences the germination of wheat with ideal temperatures between 12 and 25 degrees.  Shoot lengths from the seedling are directly related to temperature, soils that are too hot or cold shorten the length of growth. Oxygen in soil needs to be above 20% otherwise germination is slowed. Adequate nutrition is also essential for good crop growth, Nitrogen is important for plant growth however excessive nitrogen fertiliser can cause toxicity problems the maximum wheat crops can tolerate is around 25 kg of nitrogen per hectare without seedling morality (Wheat Growth and Development) The sowing of seeds and sowing depth management is important for growth the ideal depth is between 20-30 millimetres. From when seeds are planted, germinated and begun growing roots and it’s first shoots is called tiller. From here the stage of growth has 2 parts, the jointing stage shoots continue to grow and forms nodes which develop into leaves. The second part is the booting stage, when the head of the wheat plant develops from the top of the stem and the last leaf wraps around it. During the heading stage the head of the wheat plant continues to grow, and the leaf unwraps. The last stage of growth after 5 to 6 months is when the wheat turns from green to a golden colour and ready for harvest (The Wheat Plant and Its Life Cycle 2019)

Wheat is grown throughout regions of Australia specifically, south east Queensland, New South Wales, northern Victoria, south east South Australia and the belt of Western Australia. The northern regions Queensland and northern New should wales tend to have summer dominant rainfall which allows for more dryland summer crop production (Australian Grain Production 2016).  Winter crops are also successful in high moisture storage soils and some winter rainfall in the areas. The southern regions from central New South Wales, Victoria and South Australia has a Mediterranean climate with dry summers and reliable winter rainfall meaning winter crops are most dominant. Crops are typically planted in accordance to opening rainfall typically in May through to late July.

Agricultural practices have changed over the past 20 years, large scale agriculture machinery for example, tractors, cultivators, seeders, harvesters, sprayers and grain trucks are now used to grow a successful crop (Wheat 2017). Farmers are now planting large scale crops with seeding machinery with minimum cultivation or ploughing necessary. During the jointing and booting stage, the crop is managed for signs of malnutrition, diseases or weeds and pest to increase yield potential. During harvest large harvesters are used, they are self-propelled machines that cut the heads of the wheat and separate the grain. Crop rotation has improved with lupin or clover crops being planted every second of third year in wheat areas to deposit nutrients back into the soil and break the pest and disease cycle. Reducing till farming by using herbicides to control weeds before planting rather than ploughing the ground. This technique has contributed to higher moisture and soil preservation. Crops soil is tested to improve the management and application of fertilisers such as nitrogen to prevent excess run-off and toxicity. Wheat genetics have been improved to have higher yield, be disease resistant and specifically suit the environment (Australian Wheat 2019).

Throughout semester 2, replicates of wheat were established on the Gatton campus. Each replicate had 3 plots and sown at different densities. The experiment had a total of 16 replicates distributed a cross four different environments. This allows us to gather agronomic, phenological and morphological data on the species for future analysis. The four systems were rainfed with no nitrogen fertiliser, rainfed with 200kg/h fertiliser, irrigated with no Nitrogen fertiliser and irrigated with 200kg/h nitrogen fertiliser. The wheat seedling emergence and the Zadok’s development growth was recorded and after a few weeks of growth the Zadok’s was scored. After another few weeks the growth was scored again and samples from each crop was harvested, dried in ovens and weighed. The data collected from this trial allows for the analysis and interpretation of several factors. However, in particular the effect to of planting density in a high nitrogen environment under limiting and non-limiting water conditions. 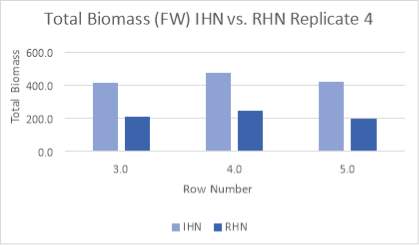 Figure 1 and 2 show the correlation between the density of wheat in rainfed and irrigated conditions. The IHN represents crops grown with irrigation whilst RHN is under rainfed condition with both crops receiving nitrogen fertilisers. It is evident that in both replicates of this experiment irrigated crops have a higher fresh biomass density than crops reliant on rainfall. This is due to sudden water stress between the emergence of flag leaf and heads can reduce the amount of grains per head and the number of viable tillers. Wheat requires soil moisture in order to germinate, crops reliant on rainfall have potentially lower moisture content. Low moisture typically results in lower germination rates and slower crop emergence (Agriculture and Food 2019). In areas such as South Australia, between 1990 and 2015 rainfall decreased by 28% accounting for over three quarters of the 27% fall in water limited yield potential (Hochman 2017).

Irrigated crops benefit farmers as it provides them with a high confidence that crops will generate economic return from higher grain yields. The major climatic factors on crop water needs include, sunshine, temperature, humidity and windspeed.  Irrigation allows of the correct amount of water to be applied at crucial times. Wheat requires adequate soil moisture for germination and crop establishment (Irrigated Wheat 2017). This is evident in the results collected from the crops in Gatton with irrigated crops having double the total biomass of rainfed crops. Irrigation gives opportunities for on and off watering times for example during wheat growth the head emergence is the most sensitive stage of growth to moisture stress irrigation provides adequate moisture in crucial times (Irrigated Wheat 2017). Different irrigation systems and layout to suit different soil types are beneficial to high yield potential. Irrigation management and water budgets are also crucial factors in the success of irrigated crops.

Water availability is a major contributor to the grain production and cropping systems, it is beneficial to have irrigated crops in areas that cannot rely on constant rainfall.  However, rainfed cropping systems can still be successful. Although larger fluctuations in yield are known due to seasonal rainfall and distribution, temperature and evaporation. Farmers can produce success wheat crops without irrigation by sowing during expected rainfall periods, fertiliser and choosing specific wheat varieties that are more tolerate to dry conditions.