The Western Lowland Gorilla (Gorilla gorilla gorilla)[1] is a subspecies of the western gorilla. It inhabits dense rainforests and swamplands in many parts of Central Africa.[2]

Western Lowland Gorillas are found in Cameroon, the Central African Republic, the Democratic Republic of Congo and Equatorial Guinea and in some parts of Gabon and the Republic of Congo. [4] 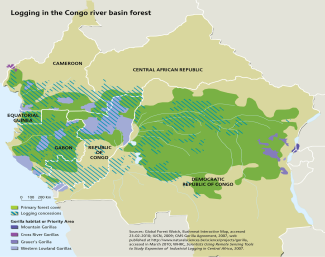 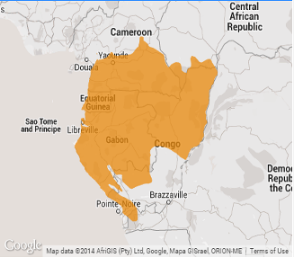 The map on the right [5] depicts the natural distribution of the Western Lowland Gorilla. As is evident from it, most of the gorilla’s habitat lies in the tropics and mainly consists of tropical and subtropical rainforests. [6] The map [7] on the right depicts the impact of a specific human activity, logging, on the habitat of these gorillas. It can be clearly seen that a large portion of the habitat of Western Lowland Gorillas lies in areas that have been granted logging concessions by local authorities. Timber exploitation in these areas results in various detrimental effects on the gorillas’ habitat; some of these effects are discussed in the section on human activities later in this report.

3. Habitat and Environmental Controls on Distribution

As previously mentioned, the habitat of these gorillas lies in the central (equatorial) regions of Africa and is dominated by tropical rainforests. Various studies have been conducted on ecological factors that control the geographic distribution. Although not much is known about western gorilla ranging habits, [8] researchers in recent years have gathered information on this topic. One such study by Doran-Neehy et. Al mentions that, “Western gorillas (G. g. gorilla) live in tropical forests where herb densities are lower and fruit is more abundant compared to the high-altitude montane forests of mountain gorillas. Many, but not all, western gorilla habitats include localized, open clearings (‘‘bais’’) covered with year-round herbaceous vegetation, or large swamps bordering rivers. Western gorillas differ from mountain gorillas in diet and demography, in that they eat more fruit, live in groups of smaller maximum size (presumably as a result of increased feeding competition), and should potentially face higher male-mating competition when gorilla density is high and home-range overlap is great.” These researchers looked at the daily path lengths (DPLs) of the gorillas to determine their dietary habits. They assumed that western lowland gorillas had longer DPLs, as compared to mountain gorillas, because of greater frugivory (frugivores are animals that are primarily fruit-eaters) and decreased herb availability (due to the vegetation structure in their natural habitat). [9] They tested what ecological and social factors best determine DPLs. The third feature that they considered was the reason behind the use of swamps by gorillas. Their last hypothesis was that, due to greater frugivory, western lowland gorillas have greater home range sizes as “greater knowledge of resource location and spatial availability may be required for efficient frugivorous foraging”. [10]

Their results indicated that the DPLs were not affected by daily contact with humans. The DPLs also did not significantly decrease when the effects of fruit consumption and swamp use were controlled for. [11] The two most significant factors affecting DPL were the amounts of fruit in the gorillas’ diet and the frequency of swamp use. Taken together, they were responsible for 49% of DPL variation. The amount of rainfall and the variety of fruit were not as significant so the researchers excluded these two factors from their model. [12] On the basis of their findings, the researchers discovered that the most important factor affecting swamp use was the availability of ripe fruit. It was responsible for “77% of the variation in the monthly frequency of swamp visits”. [13] Swamp use was not affected by decrease in fruit, decrease in “Haumania shoot availability outside the swamp”, [14] decrease in rainfall or increase in maximum daily temperature. [15]

The researchers’ earlier hypothesis was proven to be correct. However, contrary to another prediction, the availability of ripe fruit and the frequency of swamp use were inversely related to monthly home-range size. [16] They learned that, when fruit availability decreased, the gorillas ate more leaves from plants that were commonly available in the area. This caused DPL to decrease and not increase (as predicted). This showed that the gorillas preferred to consume other food sources when their main source, fruits, was less readily available rather than travel greater distances to find fruits. [17]

A study was conducted at Mbeli Bai in the Democratic Republic of Congo to gather empirical data on the life history patterns of western gorillas. [18] They considered existing age boundaries for classes for mountain and western gorillas. However, they reassigned these boundaries on the basis of their research as follows:

To ensure that any bias on the part of the researchers did not take places, two expert gorilla were asked to verify the given assignment of ages. [20] Their assessment tallied to a large extent with the assignment given by the researchers. [21]

In this table, the term ‘silverback’ refers to adult male gorillas that serve as leaders of the group and protect members of the group from predators. [22] Blackback refers to younger adult males who have not yet developed the characteristic silver hair on their backs.

As compared to humans and chimpanzees, there have not been many studies conducted on the evolutionary history and genetic variation in gorillas. Some of the analysis of these few studies has been conducted by Vigilant and Bradley in a research article for the American Journal of Primatology.[23] There are two main questions pertaining to the evolutionary history of gorillas. The first one involves the evolutionary relationship between humans, chimpanzees and gorillas; “multiple independent studies have strongly supported a Homo-Pan clade, with an earlier divergence of Gorilla”. [24] This shows that the three species share a common ancestor but diverged over a period of time into three distinct species populations.

Within gorilla populations, highly similar estimates of nucleotide diversity in western and eastern gorillas have been obtained. This suggests that despite “very

different total current-day population sizes and distributions, the evolutionary histories of western and eastern gorillas may have been broadly similar”. [28] While the depth of the divergence between western and eastern gorillas appears to date back some 2 million years, the actual split between the lineages appears to be more recent, dating back to approximately 400,000 years ago. [29]

6. Impact of Humans and the Current Conservation Status

The current conservation status of the Western Lowland Gorilla according to the IUCN Red List of Threatened Species is ‘Critically Endangered’. [30] The main threats to the gorilla population are hunting and trading of wildlife products, habitat loss & degradation and disease. [31]

Gorillas are believed to play an essential role in maintaining the composition of tropical rainforests through dispersal of seeds (due to their frugivorous diets). [32] Timber harvesting has two major opposing effects on gorilla populations: “on the one hand, gorillas benefit from growth of herbaceous vegetation (e.g.Marantaceae and Zingiberaceae) following forest canopy opening, as such herbs provide both staple food and nest-building materials; on the other hand, gorilla populations suffer with the rise in hunting associated with logging activity, especially with road network installation”. [33] Logging concessions have “potential negative knock-on effects” on gorilla populations, and it is necessary to adopt timber harvesting methods that preserve gorilla populations not just for the sake of conserving them but also for maintaining the ecosystem in these tropical rainforests. [34]

Two other threats to gorillas are disease (primarily Ebola) and hunting. Central Africa has been severely affected by the Ebola hemorrhagic fever. According to some scientists’ estimates, “bola has killed about one-third of the wild gorilla population here, mainly western lowland gorillas. Evidence suggests that the virus may still be moving through the Congo Basin, placing a large gorilla population at risk”. [35] Hunting is another threat to the gorilla population. Gorillas are highly “sought after as food (bushmeat) and pets, and their body parts are used in medicine and as magical charms.”. [36] It has been estimated that in North East Congo, approximately “5% of gorillas are killed by hunters each year”. [37]

According to me, one of the most effective methods of preserving and increasing the Western Lowland Gorilla population would be stricter legislation on the part of local governments. This would help curb the reduction in gorilla populations due to timber harvesting and bushmeat hunting. However, many scientists have said that gorillas will not survive a high frequency of Ebola outbreaks, even if bushmeat hunting is curbed to a large extent. Two strategies can be used to tackle Ebola:

Many of the governments in these regions suffer from lower levels of socio-economic development. Therefore, it is imperative that international organizations like the UN and WWF and governments of foreign countries aid these countries in the process of conservation of gorillas and other endangered species inhabiting these regions. Doing so is important not only for the sake of preserving the biodiversity in tropical rainforests but to also help maintain the ecosystem of this biome.