Water and food security for an increasing world population

What is global food security?

Global food security means providing every individual in the world with enough food to eat. This does not just mean enough calories to function but also the right nutrients to have a healthy life. The modern challenge is doing this with a growing population and sustainably, given that in the future there will likely be less land available and climate change will mean we need to use the Earth’s resources more efficiently.

Food production is dependent on water and there is overwhelming evidence that water will be the major barrier to production of increased amounts of food to meet the expanding world population.

At the moment 925 million people in the world are estimated to experience hunger, with limited or no access to the major macronutrients in the major food groups such as carbohydrates, fats and protein.

It is estimated that a further billion could be suffering from “hidden hunger” in which important micronutrients (such as vitamins and minerals) are missing from their diet, with consequent risks of physical and mental impairment.

Meanwhile a new public health epidemic of chronic metabolic conditions such as diabetes is being blamed on over-availability and over-consumption of food, by over a billion people in developed countries. The health services in several high income developed countries (HIC) are under strain from the increasing demands put upon it by an obese population.

While the future is clearly impossible to predict, it is projected that world population will reach roughly 9 billion, around 2050. However, despite what most people sometimes assume, population growth isn’t the key problem in food security. Consumption patterns are an issue that needs to be addressed much more urgently, as not all food requires the same amounts and types of resources to be produces. It has been said, for example that “if everyone today lived like Americans, we would need four earths”.

People in the developed world consume far more resources per capita than people in the developing world. The real challenge is that with increasing affluence, growing middle classes in countries like China and Brazil start adopting a more western diet – more meat and dairy, eating a more varied diet, with more imported foods and fruit and vegetables out of season.

Threats to global food and water security have been predicted as a “looming storm‟ of population growth, changeability of food price, political instabilities and climate change. Many of these issues will affect African states and communities particularly hard, in places where food and water insecurity has historically been exacerbated by civil war, state weakness, and under-development.

The focus of a recent Global food security symposium, held in Washington DC in early 2019 was summarised with the question: “how will we grow an adequate quantity, and quality, of food to feed and nourish a rapidly growing, urbanizing world in the face of increasing water insecurity?”. This question perfectly encapsulates the interconnectivity of several factors coming together to threaten the wellbeing of future generations: changing weather patterns (with increased instances of droughts and water shortages), rapid expansion of populations worldwide and the loss of arable/farmable lands on which to produce the necessary food.

The projected figures for population growth state that by 2050 there will be 9.8 billion mouths to feed globally and food supplies will be under far greater stress. Demand is expected to be 60% higher than it is currently. One of the major barrier to achieving the required levels of food production, according to the World Economic Forum, is the shrinking availability of arable land due to climate change, urbanization, and soil degradation.. Add water shortages, pollution, and worsening inequality into the mix and the implications are stark.

“Falling water tables are widespread, resulting in serious water shortages and salt intrusion in coastal areas. Contamination of drinking water and nitrate and heavy metal pollution of rivers, lakes and reservoirs are common problems throughout the world.“ (UNCCD) 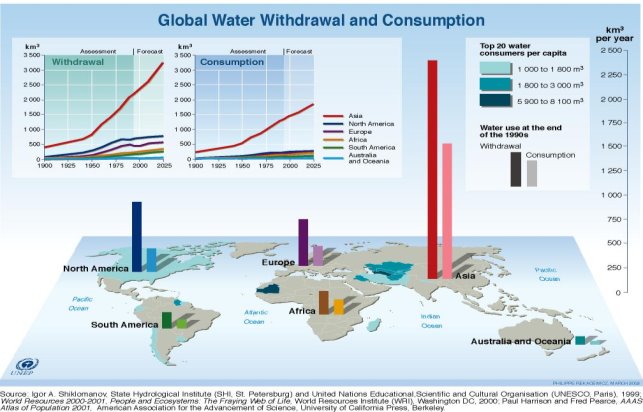 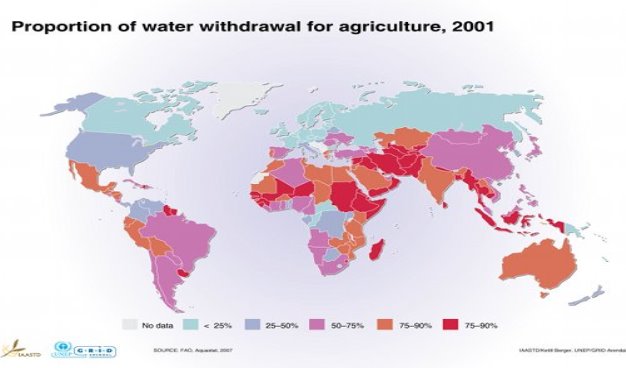 Water, food and energy are the key to human well-being. They are interlinked in a nexus which is central to sustainable development. The security of all three leads to social and economic benefits, which all increase the standard of living and quality of life

Food is vital for providing energy and its availability depends on climate, soil and level of technology. Malnourishment and undernourishment lead to disease and, ultimately, death. It can mean that children underperform at school and then experience a decreased economic wellbeing in life. They can make adults be less productive and, consequently, impact on their country’s economic worth and growth.

Water is important to individuals for drinking and washing, but also globally for food production and industry. Clean, safe drinking water enables development and allows people work themselves out of poverty. Globally 2 billion people drink from contaminated water sources and, yearly, half a million people die because of diarrhoea, diseases and illnesses that arise from unclean water.

Energy is needed for many aspects of everyday life and for development and innovation in medicine and industry. It used to be produced from oil, coal and wood. However, nowadays many different energy sources are generated by changing technology. It supports industrialisation and development and it is the driving force behind many new innovations and “green initiatives”.

What is global food security and why should we be concerned about it?

Food security is a really serious issue facing the whole world. It is about feeding a growing population at a time of climate change, which is unpredictable and not yet fully understood. Globally, we are reliant on a very slender thread of genetic diversity. According to the U.N.’s Food and Agriculture Organization (FAO), more than 50% of all human calories come from just three plants: rice, maize, and wheat. The picture is a representation of countries in terms of their population net imports. The more swollen countries in the northern hemisphere are net food importing countries. The countries mostly in the southern hemisphere have shrunk, almost to the point of disappearing. These countries export much more than they purchase. Image source: http://www.worldmapper.org/display.php?selected=54

Through history people have selected plants for particular characteristics, typically their yield. The first example of “genetic engineering” can be traced back in history to when plants were crossed with compatible varieties to make them yield more or be resistant to severe weather conditions in order to preserve their harvests.

While yield is a priority to ensure enough food for a growing population, 75 % of all calories consumed around the world can be traced to around 12 different crops. Such genetic homogeneity means that if a particular pest or pathogen arises, or a particular vulnerability to changing climates, the entire crop becomes vulnerable because of the lack of genetic variability within it. This has happened before. In the 1950s, the banana supply for almost the entire world market was based on a single variety called the “Gros Michel”. A virus, known as the Panama Virus, wiped it out because there was a lack of variability within the crop. Although there are thousands of edible plants, the majority of population is sustained largely by a few dozen plants. Kew Botanical Garden in London, UK, is currently populating a seed bank in order to preserve plants for posterity. It aims to have at least 20% of all plants in the world stored (in seed form) by 2020.

As already discussed, western style diets, rich in meat and dairy, are putting a strain on global resources. It takes more water, land and energy to raise cattle for beef, then it does to grow crops and or chicken and pork meet. People are often unaware of where their food comes from and what the production of specific foodstuffs entails.

People blindly disagree to Genetically Modifying crops, however, there are definite benefit to using GM technology to produce crops, including using fewer pesticides (which would benefit the plight of honey bees, and foster pollination), and conservation of water. Vegan and vegetarian diets have become much more common place in recent years, with nationwide initiatives to eat vegetarian meals three or five times per week, or have one, or more, entirely vegetarian days each week.Can we perhaps look forward to meat eating being as socially unacceptable as smoking or drinking and driving is now?

What can be done to help ensure food and water security?

Limiting the use of imported food, or food which has been sent to faraway countries to be processed at a lower cost (e.g. avoiding the 1000+ miles round trip food often makes to be sent to countries such as China to be processed by cheaper labour as in the case of Scottish caught Scampi), eating seasonal food to cut the expense and carbon footprint of storing food and sourcing locally produced food wherever possible, another example of this would be to be mindful of what resources your food has taken to be produced. The UK, for example, imports most of the green beans in their supermarkets from Kenya, where it takes 1 bucketful of water to grow just one green bean, plus the environmental impact of the emissions to transport those beans into the country, and yet the population are largely unaware of this

There are many interventions that could help avoid water and food scarcity in the near future. People, individually, and governments, globally, need to take ownership of changes that need to be made.

Conservation of energy and water throughout the food production process as well as ending food and water wastage would be good first steps to insure increased efficiency, to help both at present but especially in future when the demands on food productions will increase.

Poverty and political issues impact on countries ability to produce and maintain own food supplies, and poorer countries end up exporting most of their agricultural products when their own population could make use of it.

The overall feedback from my presentation was positive and the data sources was praised, as I have shown that my arguments are backed up by proper science and discussions.

The criticism seem to concentrate on this not being a contentious issue, but I beg to disagree. At a time where world leaders are arguing over what needs to be done, if anything, to tackle global hunger and climate change, I feel that arguing that the two issues are interlinked and that any worsening of the climate situation or increase in population is likely to result in water and food scarcity.