Size and characteristics of Dharavi

Dharavi is a slum in Mumbai, India and is considered as the largest slum in Asia and one of the largest slums in the world. It is located between Western and Central Railways, two of Mumbai’s main railway lines. To its west are Mahim and Bandram, with Mithi River to its north. In the 18th century, it was a mangrove swamp island on the coast of Mithi River, and due to invasions on Salsette, Riwa Fort was constructed on Dharavi to protect the borders of Mumbai. The fort developed into a fishing village over the course of one century, even before Mumbai was commercialized. It has a population of around one million and an area of 2.16 square kilometres, therefore it has a population density of 462,963 people per square kilometre and is one of the most densely populated locations in the world. Meanwhile, despite being the second densest city in the world, Mumbai only has a population density of 31,700 per square kilometre. Dharavi consists of mostly single-storey and two-storey buildings, built using brick, aluminium, cement, etc. With a literacy rate of 69%, it is the most literate slum in India. It is also home to around 15,000 informal single-room factories and cottage industries, such as leather, wax printing and aluminium brick making industries. These industries contribute US$500 million to US$1 billion annually to Mumbai’s economy. (Single storey buildings from aerial view, with taller buildings next to them) A large portion (50%) of Dharavi’s population is Tamil, with a variety of other localities living there, such as Gujaratis, Marathi Kolis, Telugus, and Hindi speakers. Agricultural labourers are the backbone of 50% of Tamil Nadu’s economy, even though they unfortunately belong to the socially oppressed class of the society. Many families in Tamil Nadu, particularly in the 1960’s, had decided to emigrate due to the cruel acts the “upper class” landowners of the rural area had done to their people and property. The recurring drought conditions in some parts of Tamil Nadu had also contributed to their migration. Mumbai attracted many of the migrants as the city gives them a sense of freedom, and most of these people chose to live in Dharavi because of the low rental price and the living conditions being better than the oppressive condition in their home villages.

In Dharavi, the water is supplied by the Brihanmumbai Municipal Corporation and five houses are needed to share one connection in order to afford it. Each house sells around Rs3500 for this kind of shared connection, and when a legal water connection is established, the BMC always leave some extra connections that can only be accessed if one bribes BMC officers, at typically Rs5000 each. The water is released in the mornings for approximately 2 hours at varying times and often 15 families have to share one tap, however at times no water would be released, which is a significant stress factor for the residents. To work around this, families would buy tankers that can store 2 kilolitres of water and supply the family for 3-5 days. Most residents filter the water with a fine fabric, while boiling water is an extra expense that many of them cannot afford. 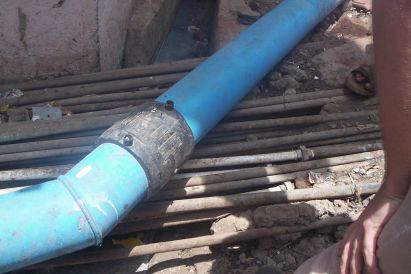 It is estimated that 1,440 people share one toilet is Dharavi, and in the rainy season, streets, lacking drainage, become channels for water carrying human excrement. Because of the stench brought by bad sanitation and the 2-5 rupees fee for using the toilet, considering the fact that workers earn 30 rupees per day in average, people would rather defecate in the side of roads, mangroves, garbage piles or bodies of water than in a toilet. While bad toilet conditions affect men and women, its consequences are far worse for the latter. It not only results in poor health and diseases e.g. diarrhoea and dengue fever, but also limits women’s  freedom and puts them in risk of harassment. A study reveals that many girls are forced to leave for school early so they can access the toilet there instead of community toilets, as almost every one of them experienced harassment while using community toilets, which usually have dysfunctional doors. Furthermore, women are frequently charged for restroom use, while men use the urinals at no fee. Although Dharavi does not have a major industry, it is home to numerous scrap recycling units and small-scale industries, such as tanneries, recycling units and pottery kilns, making it one of the most polluted places in Mumbai. Illegal waste incineration is also becoming more frequent, which emits thick plumes of toxic smoke. In the last pollution study of Dharavi by the National Environmental Engineering Research Institute (NEERI), 551.7 ug/m3 of average suspended particulate matter was found, which was more than five times higher than the permissible limit set by the Central Pollution Control Board. The pollution can lead to health problems like bronchitis and other pulmonary disorders, and in areas where pollutants are not dispersed quickly, asthma patients suffer from frequent attacks. In Dharavi, most of the children start school but only a few finish, because they are often forced to work despite the laws and the schools aren’t easily accessible. Some work to get income for their families, while the majority are forced into work by employers saying that they will gain more skills by working, and a small amount of them are even taken away from their homes to work. Most of the children take a 40-minute walk to school after they finish working in daylong 9 to 6 shifts at the plastic recycling units. These factors result fewer future employment opportunities for the children due to the lack of skills learnt in school and higher depression and suicide rates due to the combines stress from work and school.

Working can be tough in Dharavi as working conditions are hazardous and people have to work long hours to earn enough money for their family. Workplaces are often in hot rooms with burning substances such as coal present, and toxic sludge would sometimes flow down the alleyways. The consequences of them are diseases, fatalities and blackened lungs. Despite the hazards people experience in work, the payment they receive is extremely low. Some of them work from 8am to 11pm and others have to work for 20+ hours, only to earn enough for the family to eat. One man typically earns Rs 6000 ($120) per month while some of them earn much less. The long hours of work leads to problems such as people prioritising earning too much and only having a chance to see their children twice a year. The lack of sleep because of long work hours also causes a reduction in working efficiency, which could then make people earn less and force them to work for even longer periods. However, many people are now suggesting making a law where workers must be paid at least 250 rupee per day and can only work a maximum of 12 hours per day. The state government of Maharashtra first recognized the importance of redeveloping Dharavi in 1971, and multiple plans had been carried out, including the Slum Improvement Project, Slum Upgradation Project, Slum Rehabilitation Scheme and Dharavi Redevelopment Project. These plans were aiming to provide the slum with basic facilities such as water, electricity and sewage disposal, grant the residents “legitimate status”, introduce Transferable Development Right to attract private developers, and rehousing Dharavi residents into tower block apartments. However, none of them was successfully implemented, primarily due to lack of comprehensive census on number of households, not enough consent obtained from slum dwellers and not being able to redevelop a large portion of the area without adequately compensating the private developers that owned them. In 2018, the government has come out with a new Rs 200 billion project, where Dharavi will be redeveloped as a whole. The families will need to move out, however they will get houses of different sizes depending on the size of their current house, as shown below:

In spite of the major project, many other things can be done by the government as solutions to issues in different areas. For toilet and water supply problems, they can fix faulty, useless and illegal water pipe connections, increase the overall amount of connections and provide free water boiling services. They can also construct a closed sewer system and more public toilets that are free to use and have functioning equipments. Meanwhile, some possible treatments for air pollution include banning waste incineration, making laws around industry that restrict the amount of smoke they produce and separating industrial areas from residential areas. Education and working condition issues are social challenges that greatly impact residents’ everyday life, however the government can work around them by enforcing the laws so that children go to school (e.g. having fine for employers who make children work), introducing school buses, building drainage to remove toxic sludge and ensuring that hot workplaces have decent ventilation.