Population in a country is a source of vitality, and it is involved in a variety of costs to maintain a reasonable standard of living. Particularly for resource-poor Island nation like Japan, which has a population of very large or excessively small is a serious problem. Size is not the only issue; structure of the population is also an important factor. For example, it can be severe imbalances between the sexes threaten the stability of marriage and the family in society monogamous. If the number of senior citizens is large compared with the working-age population, the latter bears a heavy burden to support, and possibly the collapse of the pension system. Issues such as these cannot be ignored by anyone who wishes to understand the political choices and social problems facing Japan or to consider the prospects for the country’s future in the near term.

This case study looks at the country with a declining and aging population. Japan has a population of about 127 million people, the tenth largest in the world, but it is unusual because the population is decreasing. Only a small number of other countries (such as Italy, Germany and Russia) have low population, but none is expected to fall as fast as the population of Japan. The mortality rates also declined dramatically, and the result was that the average length of life has increased by about 30 years over the past half-century. Average life expectancy is now 82 for women and 76 for men. The percentage of people aged 65 years or more than 14% of the population in 1994, and by 2020 is expected to be the number one in the world through this procedure Japan.

Japan has nearly 27 million people, the elderly and the largest proportion of over- 65S from any country (21 %, see Figure 1). It also has a smaller proportion of the population under the age of 15 (13.6 %), which will lead to great difficulties for Japan in the future, as the number of employees will not be able to support the population. These changes occur more quickly in Japan than in Europe or the United States, and can seriously affect the economy of one of the richest countries in the world.

Rate of Change of population in Japan

Until recently, in the 1950s, and Japan is facing a chronic problem too many mouths to feed. In the Edo period (1600-1868) held by the population and the media as a desperate infanticide and abandonment of the elderly.

Japan’s population grew rapidly as it industrialized in the early twentieth century, an increase from 60 million in 1926 up to 100 million in 1967. Since the 1980s, however, has slowed population growth, after peaking in 2005, is now in decline. It is estimated that the population will fall to 121 million by 2025 and 100 million by 2050. What is more alarming is that the proportion of older persons will increase, and by 2030 it is estimated that one person in three will be over 65. This puts great pressure on the country. The course was a contraceptive on the main key for the decline in fertility. And practiced widely in Japan birth control; condom use on a large scale private. And the availability of abortions also undoubtedly helped unwanted pregnancy reduction. Abortion was legalized in Japan in 1948. The law allows for the termination of pregnancy is when persistence poses a serious threat to the physical health of the mother’s or for economic reasons. Extended explanation of these “causes physical or economic” condition is the basis for most abortions.

The changing demographics in the population pyramids are shown in Figure 1. Pyramid for 1950 is cone-shaped, with a wide base. However, as the decreased birth and death rates, has changed the form of a large pyramid and will continue to do so. In the pyramid for 2005 is replaced by a broad base of essential part before the bulging; in 2050, there is the upper part of a much larger, which indicates the predominance of the ability of the elderly. Vigorous pace of change in demographics cannot be reversed or even slowed down significantly. Avoid economic stagnation and social and maintain inter-generational equity may be the biggest challenges facing Japan, which grow gray by the year. 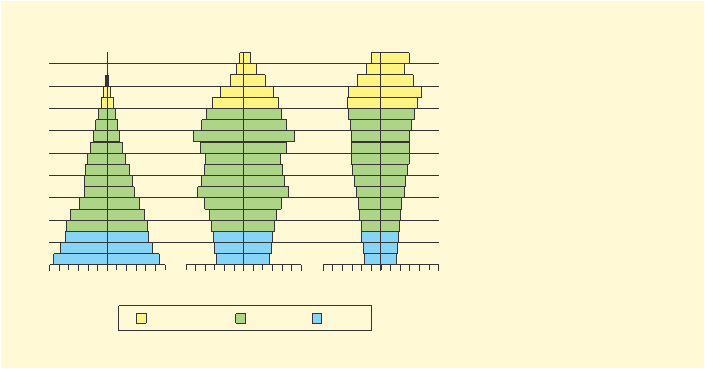 Declining of the population in Japan

The main reason for the decline in numbers is that Japanese women are not having enough children. Many Japanese who choose to marry at a later age than in April 2007, on average, between 28 and 30 years old, and this means that they have children later, or not at all. Many women decide to also not to marry, choose to study or pursue a career instead of having children.

Japanese culture in the upbringing of children and usually left for the mothers. Very few men take any leave to care for children ( although they are entitled to do so ) , and opinion polls reveal that more than 40 % of parents did not change a nappy or put children to sleep. This fact , and the lack of child-care facilities , which means that the small number of women returning to work after having children , and many women feel and others will have to give up a lot in order to have a family .

There are also strong economic reasons why people choose not to have children or to have one or two only. Being pregnant is expensive in Japan, and pregnancy is not covered by health insurance. This means that women should pay for their own medical care during pregnancy, including hospital tests. After birth, and is provided free health care for all children up to the age of three years (or five in some areas). He added that this is the huge costs of education and higher education, and many families decide they can only afford to have one or two children at most. Child Benefit paid by the government to the families of low and barely enough to pay for diapers , not to mention other costs associated with having a family .

The effect of population declination in Japan

There are two types of special problems that will result from population decline. The first is the cost of caring for people as they get older, and the second is the lack of younger workers to fill the jobs. And more and more people reach retirement age, the country will need to find more money for their pensions. This means that already raising the retirement age and gets more contributions from both employers and employees, and they’ll have to revisit again in the future. Already there is evidence of older workers in the shops, at airports, in the Tokyo subway or taxi driving.

In the future there will be great pressure on the country as it tries to provide adequate health care to support the elderly. This inevitably means larger tax bills for people who work.

The second problem and the most pressing is that companies find it difficult to hire new employees, and this will become more difficult in the future. If you cannot fill the jobs, then productivity will fall, and so the country will prosper. 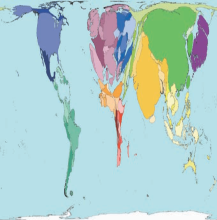 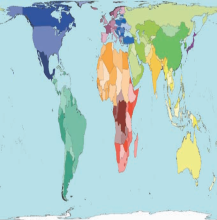 The map in Figure 2 is an equal area cartogram in which each country has been sized according to the percentage of its population that is over 65. The colors used group the territories into 12 geographical regions, and allow it to be compared with other maps in the World mapper series (see web link at end of article). Figure 3 is a standard world map based on land areas and using the same colors, for comparison. In 2002, 7% of the world’s population was over 65. The map shows Japan, in purple, with a large elderly population at 21%. This contrasts with Saudi Arabia, where only 1% of the population is over 65. China has the largest elderly population in terms of numbers (92 million), but this is only 7% of the total Chinese population. Africa is home to only 6% of the world’s population aged over 65.

In the long run, it is hoped that Japanese women can be persuaded to have more children, but social attitudes and trends is difficult for the government to address. Consideration is being given in the reforms, such as increasing the amount of the subsidy of the child, and the provision of tax allowances for families, and make child care more accessible, in the hope that this would lead to an increase in birth rates. However, many people do not think that an increase in birth rates that were not there are also social and cultural changes.

In the short term, Japan should solve the labor shortage there. One way is clear to encourage more immigration. Currently there are only about 2 million foreigners live in Japan, and this is not anywhere near enough. There is a need for workers in the full range of functions, including dirty or dangerous jobs that Japanese people do not want to do ( such as cleaning or working in residential homes ) and functions that people need to be highly skilled and trained . Shortage in the engineering and computer programming Japan is well known. Some estimates say that Japan will need at least 500,000 immigrants each year over the next 40 years in order to keep pace.

Difficulty with this, however, is that the Japanese as a nation are opposed to immigration. People born Japanese make up 98.5 % of the population, and it is difficult for foreigners to be accepted or to become citizens of Japan. In comparison with Switzerland this rate is 18% of the foreign workforce. Although the Japanese government is considering how to encourage more migrant workers, it also wants to impose controls on immigration. It would be difficult to change the views of the majority of the Japanese people, who fear that immigration threatens to what they see as the purity of Japanese culture. There is no doubt that Japan’s population in decline, and despite the fact that the government is aware of this problem, and many feel they have been slow to respond. It is unlikely that the elderly population is smaller and increasingly will be able to maintain the productivity and prosperity of the country, unless steps are taken to address the issues of population decline. 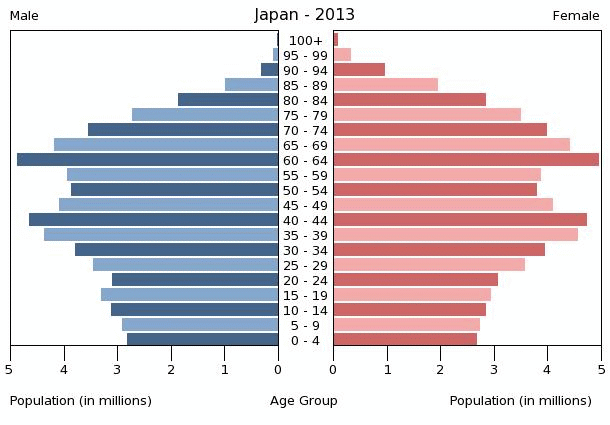