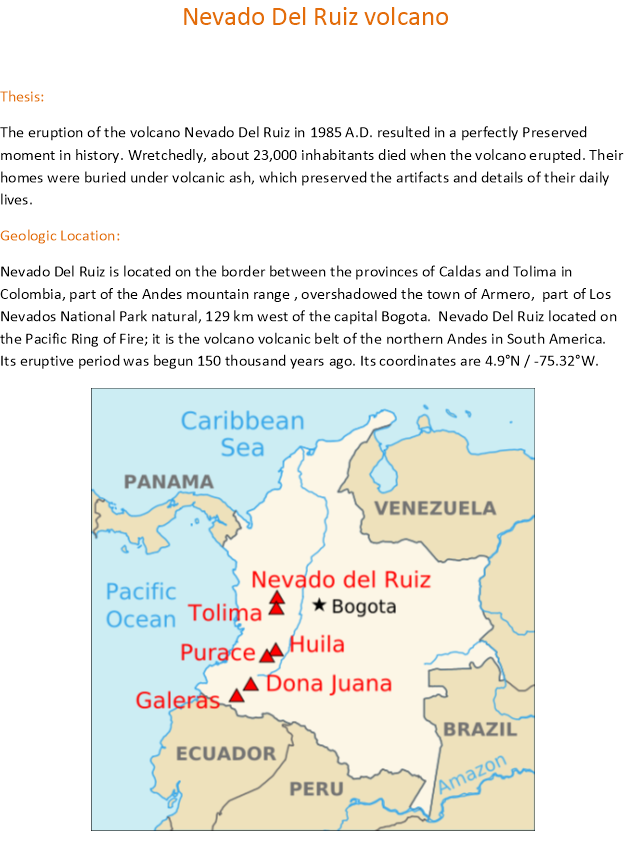 The volcano is a phenomena that occurs at several kilometers depth of the huge plates that form the Earth’s surface, causing a hole in the crust through which the expulsion of molten lava and ash, and gases. Volcanic activity usually produces a cone-shaped Obinna picturesque periodically erupts in a violent way, and some can be very explosive eruptions, such as the volcano Nevado del Ruiz. Nevado del Ruiz volcano has erupted 23 times during the past two million years.

Nevado Del Ruiz is located on the border between the provinces of Caldas and Tolima in Colombia, part of the Andes mountain range, overshadowed the town of Armero, part of Los Nevados National Park natural, 129 km west of the capital Bogota. Its Longitude is 4.9°N / -75.32°W. Nevado del Ruiz falsehoods within the Ring of Fire, in the region of active volcanoes that encircle the Pacific Ocean, as shown in Figure (2). It is the third in the far north region of Andean volcanic belt which contains 75 of the 204 Holocene age volcanoes in southern America. It is worth mentioning that the production of this volcanic belt is under the continental plate of South America by eastward subduction of the Nazca oceanic plate as shown in figure (1). 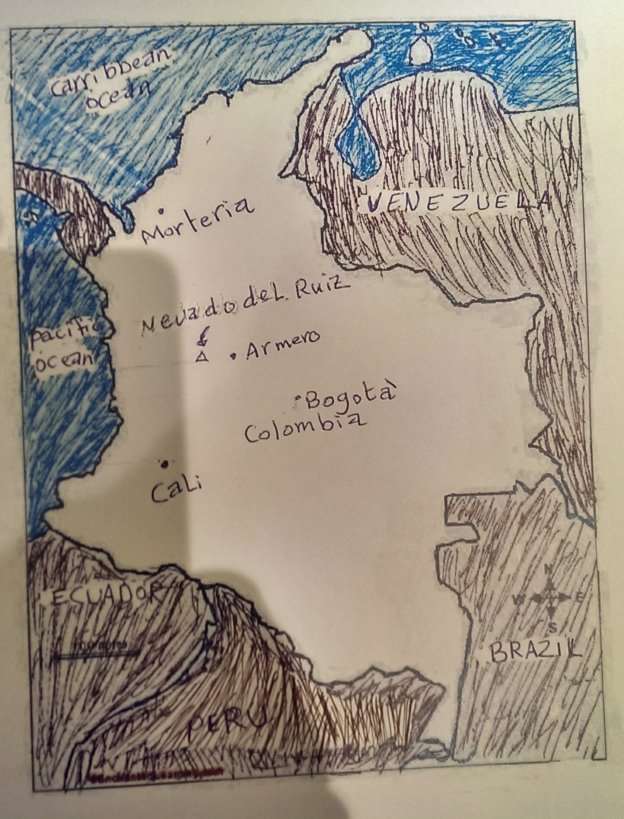 Nevado Del Ruiz is a composite volcano, that also known as a stratovolcano or a composite cones, this volcano have gentle lower slopes, but get very sheer near the summit, which give this volcano the cone like shape. So that Composite cones are created by a mixture of explosive activity and lava flows.

Nevado Del Ruiz has an overall andesitic and dacitic structure that made of layers (strata) of hardened lava, volcanic ash and tephra. Nevado Del Ruiz also has a layered appearance with alternating pyroclastic, lava, mad and debris flows, and also this volcano is created by an oceanic to continental convergent boundary. The structure layer of this volcano is given in Figure (3). 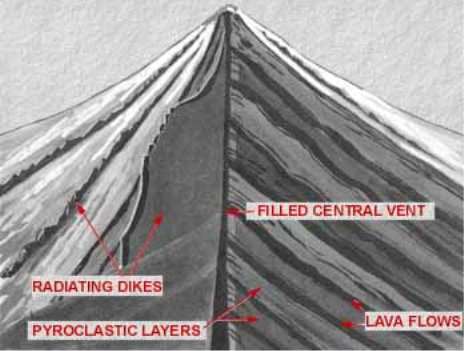 Nevado del Ruiz is a stratovolcano forms at convergent plate margins, and its steep slopes of the summit and a small hole is amazing. Is an explosive, and usually generates Plinian explosion and has been active for the two million years ago. It is well known as composite cones for the emergence of a cone shape and several layers of lava alternating with stiffness volcanic ash and other lava rocks. Stratovolcanoes form in convergent plate margins, and its steep slopes of the summit and classifications are surprisingly small. The eastward subduction of the oceanic Nazaca plate beneath the South America continental plat is produced the Andean volcanic belt. It results in the production of dacitic lava, as well as volcanic andesitic rocks. These lava flows and lava cancel everything in its path, and travel for miles. Output is a lot of debris and ash from the volcano also erupts when. Landslides are one of the most lethal consequences of this during the eruption.

As hot lava flowing on the undersides of the volcanic crater it causes a quick melting of snow and ice, which generates a very large floods that sweeping nearby valleys. As a result of mixing these floods with waste and debris floods and soil, increasing the density and volume to form very hot lahars with a thickness of approximately 50 meters and is moving at 50 km per hour. When sweep populated areas lead to the downfall of thousands of deaths in addition to the mass destruction of these areas.

Figure (1) A photo of the volcano Nevado del Ruiz

The first eruption of Nevado Del Ruiz was in 6660 BC and most recently in 1985 in the Arenas Crater. The first explosion historically documented in 1570 while its biggest eruption occurred in 1595. In 1845, the volcano erupted as a result of a large earthquake and caused a considerable mudflow which ran down the valley of the nearby river (Lagunillas River) for approximately 70 km. Its spilled out in the river channel and killing much of the local people again. The most famous and most recent eruption occurred in 1985 which regarded as the worst volcanic disaster in the 21st century in South America, where they have caused the following casualties:

The volcano activity is very limited since 1985 deadly explosion. The latest eruption occurred at 22 Feb 2012 and stopped at 10 April 2013 without any casualties. Table (1) gives summary of the eruption dates of this volcano.

Was it inevitable that so many people died/were injured? Could more have been done to save the people/ property?

The eruption signs can be predicted for some time before the outbreak of the volcano. Weeks later scientists were monitored the volcano using seismographs. Several maps were provided over a month before the eruption to illustrate the danger zones of the volcano, which showed that Armero area is clearly at high risk. But unfortunately, some unusual facts recognized, which are:

2 – Many of the people in the city are unaware of these maps.

3 – Many citizens in Armero were unable to read.

Committed many quiet starts when a major eruption, because of reassuring messages that were sent by each of:

2 – The local priest of the Church by addressing the audience.

However, it is the Red Cross to evacuate the city. But after a brief period of time evacuation, ash stopped falling.

Storm occurred and blocked the top of the volcano that made citizens unaware of what happens from the outbreak of lava. Authorities have warned that the eruption will be moderate with great danger for Armero with a very high probability of the mudflows. Unfortunately, government officials have refused this report and have declared their unwillingness to evacuate the population while making sure of its necessity. If government officials have taken the report warning seriously for the town could have been evacuated, then far fewer people would have been injured.

How we can prevent such damage and death if this volcano erupts again?

There are a lot of methods to protect towns and cities from lahars. In which these include: tunnels, alternate channels, and concrete structures. In which some have been succeed and others have not. The experiment provided that the best preventative measure is to build and establish a highly sensitive warning system. These warning systems include seismometers, which pick up the signal from the lahar as it moves to the bottom of the valley and rain gauges that accumulate water and warning when the formation of avalanches is possible. As it has been shown through the Nevado del Ruiz volcano warning systems are not sufficient. Also lines of communication and evacuation plans must also be established because the damage may not be avoidable but earlier warning thanks to better communications would empower people to be evacuated to higher ground.

Nevado del Ruiz is one of the most dangerous volcanoes in the world. It is affected by several factors, namely, the composition of the magma core, the temperature, and the amount of dissolved gases it contains. It is believed that the atmosphere and the ocean evolved gases emitted by volcanic eruptions. Its eruptive period was begun 150 thousand years ago. These facts are enough reasons for igneous activity to warrant our attention. The government must take some procedure to protect its citizen for the next volcano eruption.