Define a glacier(including the various sections) and how it is different from accumulated snowfall and sea ice.

Glaciers are masses of compacted snow that has turned to ice. Glaciers are formed over hundreds or thousands of years. Glaciers are not stationary, they are essentially slow-moving rivers of ice. Glaciers occupy about 10 percent of the world’s total land area and are found in polar regions like Antarctica, Greenland, and Northern Canada. Glaciers are also found in high elevation mountainous regions. (What is a glacier?, 2019)

As stated prior, glaciers are the accumulation of snowfall that has turned to ice. Sea ice is formed as ocean or sea water is frozen. Glaciers are found inland and are basically slow-moving ice rivers. The accumulation of Sea Ice takes long time and eventually the ice will melt and evaporates. Once evaporated, the water returns to the hydrologic cycle. (The Life of A Glacier, n.d.) Detail how glaciers advance and retreat.

Glaciers will either retreat or advance. The retreat or advancement of a glacier depends on evaporation (retreat) or the buildup of snow/ice (advance). A glacier that is in retreat is not actually moving, it is actually shrinking. A glacier advances and grows in sized if new snow is added. As the glacier size increases, the glacier will extend further down a valley.  (The Life of A Glacier, n.d.)

Between the years of 1941 and 2004, the Muir Glacier retreated 7 miles and thinned by 2,625 feet.  Ocean water now fills the area where glacier once occupied. (The Life of A Glacier, n.d.) Mt. Shasta is the fifth highest peak in the United States. Recent studies show that Recent studies the majority of Mt. Shasta’s glaciers have advanced. The expansion of the glaciers is due to an increase in precipitation in the area. (Andersson, 2017)

Discuss the various types of glaciers and the critical parts of a glacier.

There are several different types of glaciers. (1) Ice sheets are massive accumulations of ice and snow that extend thousands of square kilometers (2) Ice Caps are like ice sheets but smaller. Most ice caps are found in the high mountains where large masses of snow accumulate. (3) Mountain or Alpine Glaciersare found at high elevations. Mountain glaciers often extend from icefields and may cover large areas and over my cover a number of mountain peaks. (4) Valley Glaciers originate from icefields or mountain glaciers. This type of glacier tends to be very long, and they often flow down valleys and look like giant tongues. (5) Tidewater Glaciers are valley glaciers extend to the edge of an ocean or sea. (6) Piedmont Glaciers are the combination of valley glaciers in lowland areas. Piedmont Glaciers are formed outside of mountain valleys. (7) Hanging Glaciers are glaciers that have retreated into small valleys that lie above a major glacier.  (8) Ice Aprons are small glaciers that are attached to high elevation mountainsides. (9) Rock glaciers are rocks and other debris cover a slow-moving glacier. Rock Glaciers are found in valleys where debris can fall onto the ice. (10) Icefields are like small ice caps, but unlike ice caps, they are influenced by the underlying topography. (What type of glaciers are there?, n.d.) Glacial abrasion leaves striations. Striations are linear scratches, grooves, and gouges where sharped edge rocks scraped across bedrock. Striations may indicate the direction of the ice flow long after the recession of glacial ice. Cirques, are steep and deep bowl-like depressions that have been produce by glacial erosion. These are commonly found beneath crevasses near the head of a mountain glacier. The expansion of nearby cirques can often produce sharp mountain ridges, coils, or horns. (What type of glaciers are there?, n.d.) 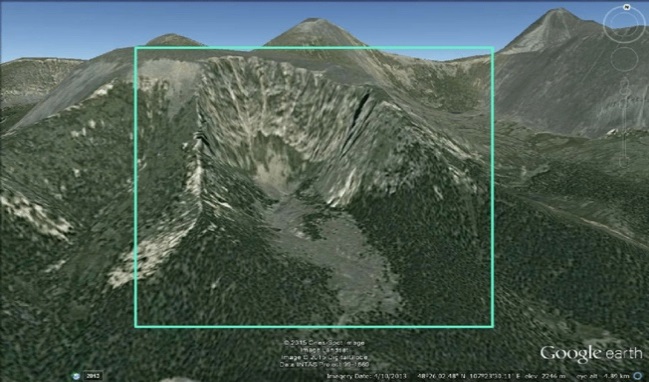 Eskers are linear mounds of sand and gravel that wind their way across the landscape.  Eskers are formed by deposits left by running water found on, inside, or beneath a glacier. Moraines are accumulations of rock, debris, and dirt that have fallen onto the glacier surface or that has been pushed along by the glacier as it moves. A receding glacier leaves behind moraines that are found long after the retreat of a glacier. Glaciers transport materials as they move. This movement of material sculpts and shapes the land beneath the path of glacial flow. Over hundreds or thousands of years, the weight of a glacier and its slow and gradual movement significantly changes the landscape. The result of erosion caused by the movement of the ice, the depositing of rocks and debris, and other glacial erosional processes significant alter the land that is in the path of the glacial flow. (The Life of A Glacier, n.d.) The following photos are examples of glaciation and the resultant erosional landforms. Figure 6 is a glacially carved cirque of the Mt. Asralt Khairkhan in Mongolia. Figure 7 is an Esker that is found in Sweden. Figure 8 is an example of lateral and terminal moraines of a valley glacier in Nepal.