City of New York is the most heavily populated city in the United States and one of the most populous urban agglomerations in the world. From the geographical point of view, it is located in a coastal area at the mouth of Hudson River into the Atlantic Ocean. The city’s territory has been extensively altered by human intervention, especially with considerable land reclamation. At the present time the city total area is 1214km2, 790km2 out of it being land and is increasing with every year. New York City’s land use is characterized as a highly developed urban core on Manhattan Island and a sprawling dense suburban area. The average building height in the city is approximately 142m.

In the city of New York, urban heat island is a very well-known fact and it causes a lot of problems in various parts of the city, especially in the areas with high buildings. In the last two decades there have been countless researches and analysis made by different scientists and city government regarding atypical increased heat in some urban districts. In the last years, abnormal city climate became a bigger concern also for general public and the number of local communities involving in various heat mitigation programs is increasing.

One of the most problematic zones regarding urban heat island is Manhattan. This district has the shape of a high urban canyon with buildings height ranging from around 70m up to 541m but the average height is of approximately 130m. The traffic in this area is overwhelming and combined with the large amount of materials that can absorb heat during the day, Manhattan is considered the hotspot of high temperatures in New York City. However, during the day there are multiple regions with higher temperatures than in Manhattan. But then again during the night, the temperature remains elevated in this specific region while in the other areas, the cooling process happens much faster and considerably easier. 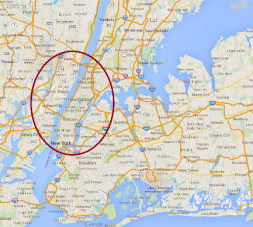 During summer temperatures are elevated and in this period urban heat island is more accentuated. Summer temperatures in the city are in average 4°C warmer than surrounding suburban and rural areas. During winter city temperatures are in average 3°C warmer than surroundings.[1] According to this research Variations in New York city’s urban heat island strength over time and space[2] in New York City, on a typical summer day with 30°C air temperature, roofs and upper parts of buildings’ facades can reach more than 80°C, while the pavements and streets on the floor of the urban canyon have a temperature varying from 65° to 80°C.

Absence of parks, gardens and street trees is a well-known problem in New York City districts and in 1996 the first program with the intention of greening the city has begun. It is called the Greenstreets and the purpose is to “change unused road areas into green spaces that beautify neighborhoods, improve air quality, reduce air temperatures (…). Since its beginning, over 2500 Greenstreets have been built citywide”[3] and the below table shows the current status. 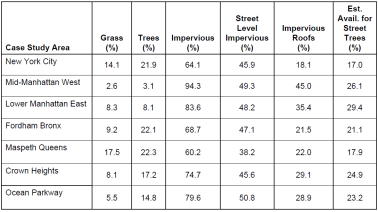 Figure 5‑b This table shows the percentages of vegetation and impervious surfaces in some of the New York City neighborhoods. The percentages are comparative to the specific zone.

Landscape architects work together with the city government and local community groups to determine how best to increase the green infrastructure in the city. In Manhattan, more than half of the buildings’ roofs and terraces are no longer impervious because of the multitude of programs implemented by the government to fight the heat.

The most important plan is called PlaNYC 2030[4] and it was implemented in 2007. Since then 903000 trees have been planted and in 2014 New York City had the cleanest air in the last 50 years. Moreover, since September 2013, an additional 185000m2 of black asphalt felt roofs have been upgraded to green roofs. Currently only 14% of the city area is covered by parks and gardens and they help reduce the heat, but the program is continuing. According to NASA “about 14 percent of the New York City’s impervious surface area consists of rooftops, most of them dark, heat-generating surfaces, typically tar”[5]. If this all this area is to be transformed into green roofs, then the percentage of gardens could grow up to 28%.

In January 2010, one major project called Green light for Midtown[6] has been implemented in the midtown area, Manhattan. The idea was developed as a little part of the PlaNYC 2030. This project was a “major initiative in the City’s efforts to improve mobility and safety”[7]. However it also had a smaller and not that important objective to increase the green areas in midtown and have lighter colored streets and pathways. Some trees have been planted but more have been placed in large pots to ensure flexibility. Most of the streets have been temporarily painted in green and blue colors. The project was a success at that time as the lighter surface colors ensured a lower temperature for pedestrians.

Another program called NYC °Cool Roofs[8] (White roof project) [9], has as purpose turning most of black asphalt felt roofs in New York City into white roofs. The procedure is by painting the roof covering with a highly reflective paint, of minimum 0.75 albedo as stated in the project law[10]. According to the White Roof Project research on a summer day with 32°C a white roof surface temperature is with 6°C warmer than the air temperature and with 44°C cooler than a black asphalt felt roof[11]. Since the project started in 2010, more than 535000m2 of roofs have been painted white in New York City metropolitan area[12]. 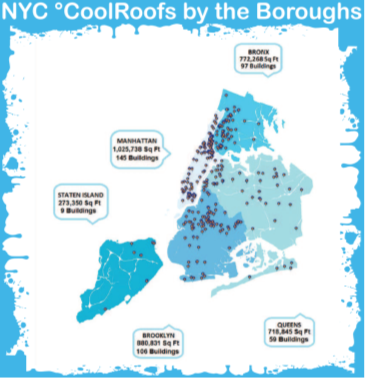 Even though white roofs are more used than green roofs, the latter have greater heat mitigation potential. In Manhattan, while a white roof has the power to cool the air temperature with 0.7°C on a summer day, the same area of green roof can cool the air around with approximately 3°C and the effect is extended on a larger area.[13]

New York City has to struggle every summer with air conditioning and mechanical ventilation of every building. Because of the intense heat and the amount of units running in the same time, long power blackouts are very common and people had to find solutions to improve the air quality indoor. A lot of companies took the decision to install living walls indoors because of design reasons, but in time they realized the positive effects that they have on indoor climate. As a result, this solution became with time popular and more people and companies take the decision to install a living wall inside to help the air conditioning. Indoor temperatures during summer are very close to the outside temperatures and a living wall indoor can reduce the room temperature with as much as 7°C. 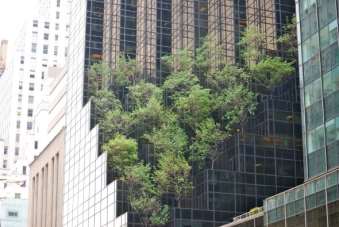 Green facades and living walls are a common choice between New Yorkers but not as common as green roofs. Living walls are mostly used inside or on terraces and balconies. Green facades are also an appealing design in New York City and they appear mostly on old buildings. On new buildings, a full or partial green façade is achieved by plants that people grow in their balconies or hanging from the outside window sill.

Green roofs are increasing not only because of the multitude of promoting programs and laws but also because people discovered the benefits that these structures have. Most of them are becoming used as fruits and vegetable gardens, especially on the apartment blocks, schools and kindergartens. Moreover a nice flower garden on each apartment terrace increases the property value. Therefore the real-estate agencies are taking advantage of this feature and implement green roofs and green walls in more and more buildings. As a conclusion, most of the people’s reasons for adding a green roof or living wall anywhere in the city are more oriented to economic benefits or attractive view and practical usage. However the effect on the city climate and indoor temperature is the same. 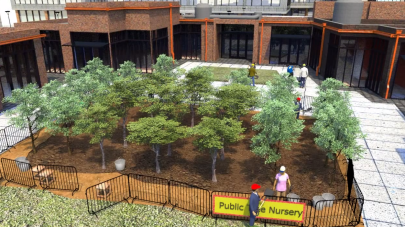 The city government has a very efficient and well-organized informing procedure for local communities and the number of volunteers for helping cool the city is increasing. Also Central Park in Manhattan area, during summer is considered the heart of cool and shade and people realized how much power vegetation can have on the city climate. Therefore one of the most important practices that communities are doing is helping the government create spaces or use the existing parks for public tree nurseries. When trees reach the necessary size, volunteers help the government plant them on streets or in areas where shade is needed.[14] As a result, New York City is becoming a greener city. Moreover, through the program NYC °Cool Roofs and White Roof Project, people volunteer to paint their own roofs white.

[5] NASA. The Making (and Breaking) of an Urban Heat Island. [online]

[10] A Local Law to amend the administrative code of the city of New York and the New York city building code, in relation to roof coating standards, 347-A (January 1, 2012)