THE CHANGES IN VEGETATION AND SOIL ACROSS SAND DUNE DEVELOPMENT AT FLINDERS BEACH, NORTH STRADBROKE ISLAND.

In coastal environments, deposited sediments reflects elaborate records of changes in sea levels(Gontz, Moss et al. 2013). The first stage of dune development is the formation of an incipient dune which can be also referred to as an embryo dune(Hesp 2002; Maun 2009). Upon colonization of the incipient dune by vegetation, soil development is initiated(Maun 2009). Parallel to the shoreline, an established dune ridge is usually formed as a result of an increase in height, horizontal expansion and coalesce(Maun 2009). Transition time from an incipient dune to an established dune varies however depending on the sediment supply, vegetation composition, velocity of wind, climatic factors, human impact, plant height and density(Maun 2009). Fore dunes often act as natural barriers because they shelter sensitive inland ecosystems from sea impacts, this in turn helps to increase biodiversity landward of the shoreline(Durán and Moore 2013). Hence, dune formation, evolution and development is as a result of multiple complex interactions amongst Aeolian and subaqueous sediment transport, coastal plant communities, beach topography, fluid dynamics and storms(Short and Hesp 1982).

Generally, the vegetation pattern of North Stradbroke Island follows a retrogressive succession process, the coastal closed forest/scrub can be seen on the youngest aged dunes, the intermediate aged dunes comprises of the eucalypt open forest and the eucalypt woodland and Wallum heath can be found on the oldest aged dunes(Clifford, Specht et al. 1979; Thompson 1981) Similarly, for the flinders beach site, we also observed a retrogressive succession process whereby the dominant vegetation shows the dune age. For example, the dunes closest to the beach are the young age dunes while those found inside the forest are the intermediate and old age dunes.

According to the Clifford and Specht (1979) classification system, flinders beach is mainly dominated by coastal dune vegetation and coastal closed forest. For example, an open heath vegetation type was observed at the intersection of the forest and coastal dunes. However, as one moves further into the forest, the vegetation observed is a closed forest. Vegetation type, climate and soil parent material are the three principal factors that control soil development(Jones, Sowerby et al. 2008). Soil development is a gradual process and is not measured directly. It is studied usually through Chrono sequences(Jones, Sowerby et al. 2008), over time scales that range from a couple of decades to hundreds and thousands of years(Wilson 1992).

The aim of this study is to determine how vegetation and soil changes in a landward direction from the coast alongside dune development in the area.

North Stradbroke Island is the second largest island in the world. Located 40 km due east of Brisbane, the island serves as a protection to Moreton Bay. It is has an approximate length of 35km and a range width of 2 to 11km (Thompson 1992). The Island is characterized by a subtropical climate; winter seasons are relatively mild and dry while summer seasons are warm and moist(Clifford, Specht et al. 1979; Coll and Whitaker 1990). Mean annual rainfall is 1600mm and prevailing wind direction is South East(Clifford, Specht et al. 1979; Thompson 1992). The study area Flinders beach, is 8 km long stretching from Amity point to Point lookout. coastal dune vegetation, Wallum heath and open eucalptus forest are the dominant vegetation at the site. Recreational activities in the area includes camping, swimming, surfing and four-wheel driving. 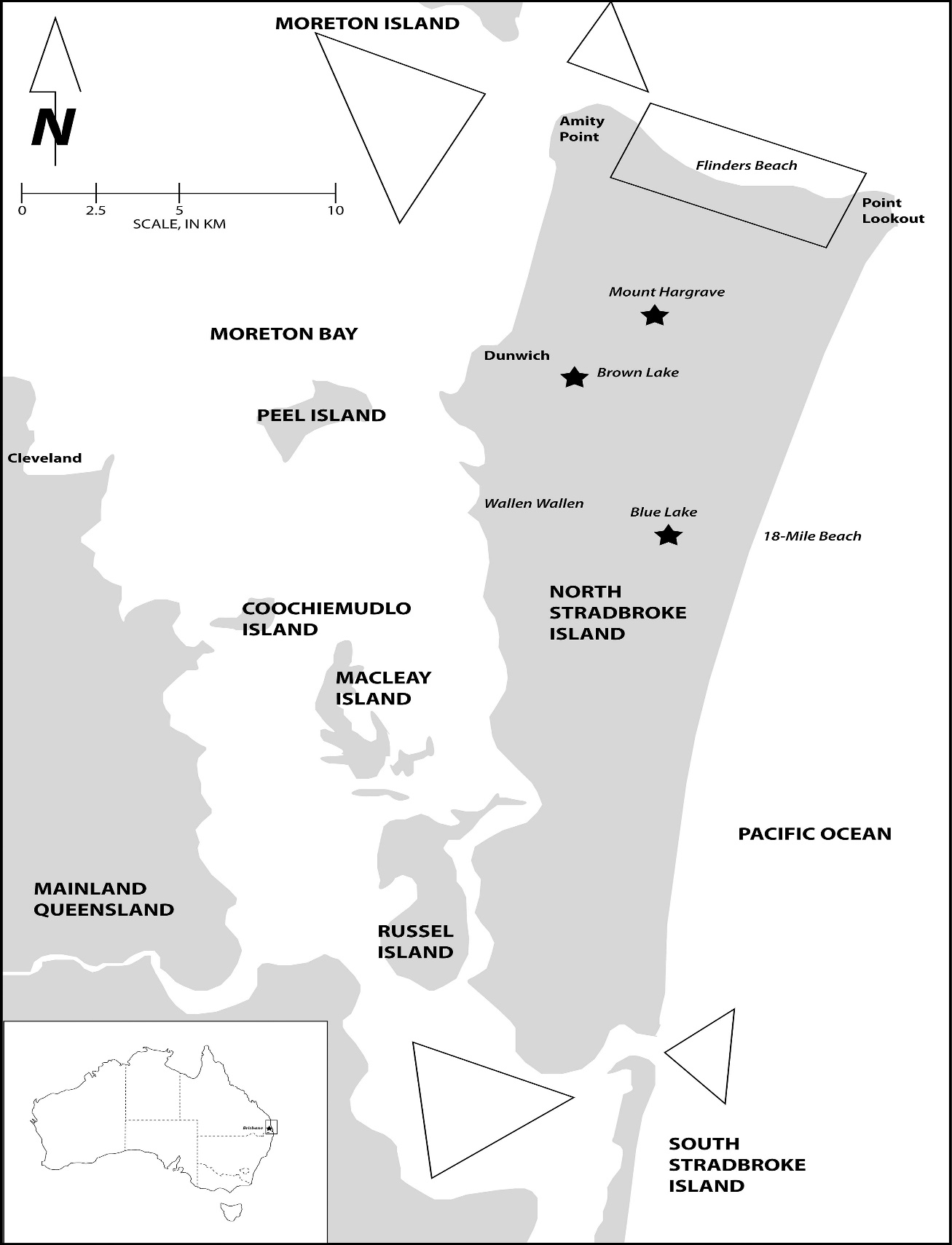 The study relies on data collected on the site during the field trip at Flinders Beach on the 8th of September, 2019. Vegetation data was collected by quadrant sampling using Point-Centered Quarter Method. Quadrant sampling is a tool which can be used to estimate density of biodiversity in an area and to study ecology at large(Heltshe and Forrester 1983). This method involved the use of quadrant and a tape to measure vegetation along the transect line. A total of six (6) set of points were selected 50 meters from each other along the transect line. The area around each point was divided into four 90° quadrants (A, B, C and D), and the plant closest the point in each quadrant was identified. The stem diameter at a height of about 1.2 meters above the ground level for the selected plants and distances between these plants and the central point for each quadrant was measured and recorded. Also, species and position were recorded for the plants found within and along the transect line. The percentage of ground cover (i.e. herb, leaf and bare), shrub cover and foliage projective cover was recorded.

Soil horizon, depth, pH and color data was recorded from different dunes crest and swale along the transect line in the field. For each crest and swale, an auger was used to drill the soil to the C horizon for which the soil depth was recorded. Soil pH was tested using the pH Test Kit in order to test whether the soil was acidic, neutral or alkaline. During this test, we measured one teaspoon of soil sample and placed it on the white tile provided in the box, we added a few drops of indicator dye and dusted it with white powder supplied in the kit we then waited for about 30 seconds for the color change to effect before matching the color of the soil samples to that of the color chart. Each color in the chart indicates the pH level of the soil. Soil color (hue, value and chroma) was recorded using the Munsell Soil Color Chart, this made it very easy for us to identify and classify the color of soil in the field.

Table 2; shows number of trees per meter square of each species and relative density

Table 3; shows total and mean basal area of each species where BA is Basal Area

Table 4; shows dominance and relative dominance of each species

Table 5; shows frequency and relative frequency of each species

Table 6; shows importance value and rank for each species

Fig 3; soil profiles for each dune’s crest and swale

For the swale at this dune, soil pH values for A1 and C horizon are 4.5 and 5 respectively. This also indicates acidity of the soil. The color recorded here was 10 YR, 3/3(dark brown) and 7.5 YR 8.5/1(pinkish white) for each horizon.

For the swale at this dune, soil pH values for A1 and C horizon are 4.5 and 4.5 respectively. This also indicates acidity of the soil. The color recorded here was 10 YR, 3/3(dark brown) and 10 YR 8/1(white) for each horizon.

For crest, soil pH values at A1 and C horizon are 6 and 7 respectively. This indicates that the soil here is slightly acidic at the top and neutral inside. The soil color here was 10 YR, 4/3(brown) and 10 YR, 8/1(white) for A1 and C horizon.

For the swale at this dune, soil pH values for A1 and C horizon are 5 and 5.5 respectively. This also indicates acidity of the soil. The color recorded here was 10 YR, 3/4(dark yellowish brown) and 10 YR 8.5/1(white) for each horizon.

Soil pH test carried out on the old age dune indicate a pH level of 6.5 at the C horizon and a soil color of 10 YR, 8/2(very pale brown). The color of soil is produced by the presence of minerals and the amount of organic matter(Brady, Weil et al. 2008). For example, we observed that the color of the top soil in the forest looked darker, this is because the high organic matter content which tends to make it look darker. Soil use and behavior is not affected by its color, soil color can however indicates soil composition and gives hints pertaining to the conditions the soil is subjected to(Brady, Weil et al. 2008).

The soil pH test carried out on the first dune ridge (crest and swale) indicated a neutral pH of 7. However, as we began to landward into the forest, the pH level decreased and indicated acidity for majority of the soil samples. This applies to most Australian soils as they tend to have low pH and organic matter content(Greenslade and Vaughan 2003). The solution is to add agricultural lime, dolomite or poultry manure.

The point quarter method is used to gather information about frequency, density and coverage of tree species found in forest. This helps ecologists to estimate the number of individuals present in the population or community.

According to Queensland Environmental Protection Agency and Beach Protection Authority, ‘’dune vegetation consists of three zones that are arranged roughly parallel to the coastline. The zones reflects that changes in soil nutrients and moisture content which increases in a landward direction and changes in the degree of exposure to strong winds, salt spray and sandblast, which will decrease in a landward direction’’.

The fore dunes and frontal dunes close to the sea are dominated by stabilizing plant species like the grey creeping grass (Spinifex hirsutus), guinea flower and pig face (Carpobrotus glaucescens) with purple daisy-like flowers. Tree species like Casuarina equisetifolia also known as the coast she-oak is dominates the area. The soil nutrient and moisture content is low also there is a higher degree of exposure to wind, salt spray and sandblast. For vegetation to survive on these exposed dunes, they have to be salt tolerant and wind resistant.

Behind the frontal dune is the high dune which is dominated by coastal Wallum heath and closed forest. The vegetation here is characterized by tall trees and an understory of grasses and shrubs. Common tree species here are Tuckeroo (Cupaniopsis anarcardiodes), Cypress-pines (Callitris columellaris and C. rhomboidea) and Paper Bark (Melaleuca quinquenervia). Smaller tree species and shrubs include Banksia (Banksia serrata), prickly moses (A. ulicofolia), May-bushes or Tea-trees (Leptospernum), grass-trees (Zanthorrhoea Johnsonii) etc. There are also presence of smaller flowering shrubs and creepers like the pink flowering Boronia (Boronia rosmarinifolia), eggs & bacon (Dillwynia floribunda), the yellow pea (Phyllota phylicoides) and false sarsparilla (Hardenbergia violacea). The nutrients and moisture content of the soil at these dunes are relatively high compared to the soil in the frontal dune. Also, soil and vegetation exposure to strong winds, salt sprays and sandblasts are low compared to the frontal dunes.

Vegetation structure and complexity increase with an increasing distance from coast. Similarly, soil profile shows an increase in the number of horizon (A1 and C), soil acidity increases, and exposure from strong winds, salt spray and sandblast decreases in a landward direction.

The changes in vegetation structure and soil composition along the dunes as one moves further inland therefore demonstrates a retrogressive succession pattern.