The contemporary issue of deforestation is seen as a rising global concern involving the complete clearance of forests either by cutting or burning. Forest clearance is seen to fluctuate however rates of decrease across the Amazon basin where as large as 30% between 2001 and 2002 (Santilli et al, 2005). Optimistic climate change models show that the median distance between the areas in the Amazon rainforest and their closest future (2050) climate model according to the prediction based on temperature and precipitation change increase to over >475km (Feeley and Rehm, 2012).

Deforestation affects the Amazon basin on a large scale whereby rates have exponentially increased since 1991 (Fearnside, 2005). Cattle ranching within the Amazon are seen to account for 70% of the clearing activity (Fearnside, 2005). This argued upward trend of deforestation is set to continue due to cattle, pastures and highways (Nepstad et al, 2001). Prior to this the Amazon remained largely intact until the “modern” wave of deforestation in 1970 due to the transamazon highway. Therefore due to modern issues such as global population increase, increased demand for land and resources forest degradation is becoming an important concern which needs to be addressed. With the original extent of the Amazon forest covering approximately the area of Western Europe (Fearnside, 1993a); reliable estimates are needed to monitor deforestation levels. Recent values of deforestation are seen in Figure 1. 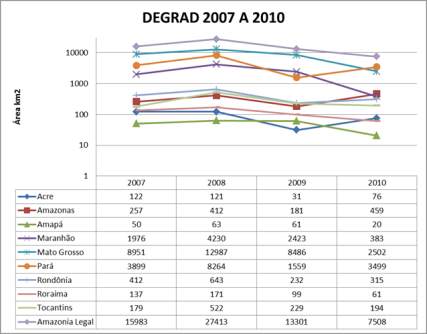 It can be argued that there is no real explanation as to why deforestation rates fluctuate therefore Fearnside & Barbosa (2004) question whether the statistics produced are valid. However these estimates are needed in order for protocols to come into action. As high deforestation rates are contributing to the global concerns such as loss of biodiversity, greenhouse gas warming as well as the destruction of such valuable resource. Protocol’s can monitor these fluctuations however before prevention takes place the causes of deforestation need to be addressed.

Deforestation of the Amazon rainforest can be attributed to many different factors. Although the expansion of the highway infrastructure can explain part of the deforestation in the 1970s and 1980s it cannot be the sole reason (Schaeffer et al, 2005). As it does not provide the explanation for the issue in the 1990s when the infrastructure development came to an end however the rates of deforestation still remained high. Nowadays the current expansion of highways is seen as a consequence rather than a cause as blaming governmental organisations masks the real reasons. The primary underlying forces behind deforestation in the Amazon region are combined effects of cultural, demographic, economic, technological, political issues (Schaeffer et al, 2005). Then underlying governmental policies, as well as institutional, socio-economic factors interact among themselves and function as one, driving deforestation within the Amazon (Schaeffer et al, 2005).

More recently there have been different drivers of deforestation such as soybean and beef production which have therefore required a larger portion of land for production and the infrastructure involved due to globalisation. However these new drivers have not replaced existing ones they have been added to the ongoing list of deforestation drivers. These new plantations involve new infrastructure development which can expect to destroy more forest alone (Fearnside, 2001c). Infrastructures developments are seen as an added effect as the Forest loss in the 1990s would have been notably less severe were it not for the preceding infrastructure standing in its way.

These transportation links are seen to accelerate the clearing of rainforests. The Avanca Brazil Program created a development package for the period 2000-07 which included a US $20 billion development in infrastructure within the Amazon region (Laurance et al, 2001; Nepstad et al 2001; Fearnside, 2002a). This development was driven by the perceived need to transport the new production of soy beans. Particularly damaging roads where the BR-163 and BR-319 highways (Fearnside, 2005).

Large landholders are seen to be the most sensitive to economic change such as variable interest rates, financial returns, land prices and inflation. With Tax drivers been a strong driver of deforestation rates in the 1970-80’s (Mahar, 1979). With government subsidised credit at rates considerably lower than inflation meant that they became much scarcer after 1984. However in 1994 when Brazil set out the plan for a “Plano Real Reform” (Fearnside, 2005) hyperinflation dominated the economy however this resulted in land been at peak price reaching levels which were justifiable for production. As a result deforestation enabled claims to land and cutting for cattle pastures was the cheapest and most effective method (Hecht et al, 1988; Faminow, 1998; Fearnside, 1987/2002b). Due to Brazil’s recession deforestation rates declined throughout 1987-1991 as ranchers were unable to expand as quickly due to the government lack of funds for infrastructure developments. However the “Decree suspending incentives” (Fearnside, 2005) came into practice in mid 1991 which was the result of the most effective decline; evident in figure 2. 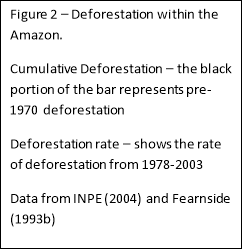 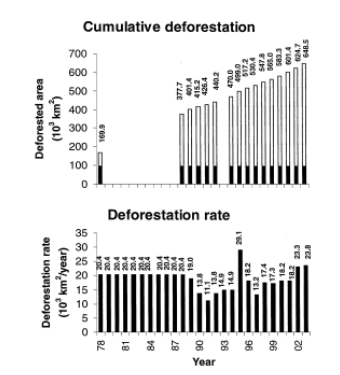 It has been argued that the peak in 1995 was a result of economic recovery due to the Plano real response however due to this the fall seen in 1996 and 1997 was a logical decision of the Plano Real to cut the rate of inflation; shows fluctuation in deforestation rates (Fearnside, 2005). These major rates of fluctuations where due to money availability, inflation rate due to most of the clearing been done by those who invest to medium/large cattle ranchers. In figure 2 it is clear to see that deforestation rates climbed per year which then remained constant for 4 years followed by a steep rise in 2002 to a new level.

Timber extraction has seen to be a cause of such rises as increased forest flammability has meant higher rate of loss. This undetected deforestation leads to severe damage that is visible on landsat imagery as deforestation (Cochrane et al, 1999; Nepstad et al, 199b). The role of logging increases the chance of forest fire as fires dry out large areas making a wider catchment susceptible to fires. Verissimo et al (1992) notes that forest fires create the damage of almost twice the volume of trees being harvested. Similarly a major resulting concern is the number of rainless days needed for a logged area is much lower to reach flammable conditions than for one that hasn’t (Nepstad et al, 2004).

Due to the above causes a global climate impact has occurred.

Deforestation creates a large global climate impact which includes loss of biodiversity, reduced rainfall and global warming contribution; similarly a loss of productivity, soil erosion, nutrient depletion and soil compaction. A change in the hydrological regime impact involves watershed functions been lost and flooding. The percentage of water recycled within the Amazon basin is now seen to be 20-30% (Lean et al, 1996) rather than the previous figure of 50% (Salati & Vose, 1984). This at a policy view is not appreciated (Fearnside, 2004) as current levels of available water worldwide is seen as low. Results show that currently 150 million people live in cities with a persistent water shortage (defined as “having less than 100L per person per day”) and by 2050 is set to increase to almost 1 billion people (McDonald et al, 2011). The deceptive view of the potential deforestation rates increasing global precipitation levels misleads the idea that deforestation is bad.

Biodiversity loss is a result of deforestation which impoverishes the earth’s biodiversity (Capobianco et al, 2001).

Net emissions of greenhouse gases are increased as a result of deforestation through forest fires. Amazonian deforestation distinguishes a greater concern due to potential future emissions. In 1990 the net commission emissions from Brazilian deforestation represented 5% of the global total from a variety of sources (Fearnside, 1997b). However the concern is in the carbon stock in biomass within the Amazon which represents 38% of the tropical total (Fearnside 2000a:129). Likewise this release of carbon through tropical deforestation showed a release of 1.5 billion metric tons of carbon (GtC) to the atmosphere annually throughout the 1990’s; which can be seen as 20% of anthropogenic greenhouse gas emissions.

It can be seen that global climate models show that as precipitation decreases linearly there are increasing amounts of precipitation. The climate of Brazil changes due to the loss of tropical rainforests to pasture; the surface temperature increases by approximately 1° to 3°, precipitation increase and a decrease in evapotranspiration. This heating out the surface leads to localised upward motions that cause the formation of clouds which in turn produces more rainfall (Shukla et al, 1990). Similarly compared to rainforest cover the degraded pasture is seen to have a higher albedo value, with lower surface roughness and a shallower and sparser root system and lower available storage capacity for soil moisture (Shukla et al, 1990). Thus cannot retain the high levels of precipitation leading to higher rates of surface runoff.

Due to deforested areas been drier and more susceptible to forest fires, the ENSO triggered an extended dry condition in 1997-98 across the Amazon. This meant an increase in tree mortality and forest flammability especially in logged areas due to large areas burned releasing carbon to the atmosphere (Page et al, 2002). However even in non ENSO years global warming has been observed to be putting tropical regions at risk. Over the last 5 years droughts within the basin droughts have been detached from ENSO events but have collaborated with some of the highest temperatures on record (Gullison et al, 2007). If these droughts become more frequent and severe or the dry season lengthens due to deforestation or a reduction in rainfall due to global warming then a proportion of the carbon stored in the tropical rainforests will be released into the atmosphere (Santilli, 2005). So as Malhi et al (2004) states the undisturbed rainforests act as a “sink” for the atmospheric carbon which is yet to be released.

The effects of Amazon deforestation upon climate change is investigated using numerical experiments of an atmospheric general circulation model (AGCM) with set global sea surface temperature and the same AGCM joined to an ocean GCM (CGCM) over the global tropics. The joined model demonstrated a reduction in rainfall which was 60% larger compared to its control run (Nobre et al, 2009). Nobre concluded that amazon deforestation affects climate change and is dependent on AGCM’s. However there is a general agreement that amazon deforestation results in a local reduction in rainfall and an increase of surface temperature.

This abundant cheap land within the amazon needs caps on it to ensure all is not sold. As this means destructive, fire-based agriculture, such as cattle ranching and slash-burn-farming, will continue to thrive. In the Amazon an area the size of France has already been deforested, a large fraction of which is now degraded cattle pasture with minimal benefit for the natives (Schaeffer, 2005). Therefore sustainable development is the step forward.